CO2 in the critically ill

CO2 exerts potent effects on lung biology that could be clinically relevant in critically ill patients, in particular those with acute respiratory distress syndrome (ARDS). The impact of hypercapnia on outcome in these patients is yet to be determined.

The physiological effects of hypercapnia are increasingly well understood, but the literature remains confusing. Important insights have emerged regarding the impact of hypercapnia on cellular and molecular function. Hypercapnia may have potentially beneficial effects in patients with acute respiratory distress syndrome (ARDS), independent of the benefits from ventilation with low tidal volumes (Broccard et al. 2001; Curley and Laffey 2013), including reduction in pulmonary inflammation (Takeshita et al. 2003) as well as reduced oxidative alveolar damage (Shibata et al. 1998). It has also been suggested that CO2 can act as a signalling molecule via pH-independent mechanisms resulting in deleterious effects in the lung, all derived from hypercapnia (Briva et al. 2007). Clearly, hypercapnia has potent but potentially beneficial as well as potentially harmful effects. It becomes increasingly important to determine the net effect in specific conditions (Kregenow et al. 2006).

We review the biological and clinical effects of hypercapnia, especially in the patient with ARDS.

Hypercapnia has potential beneficial effects, which have been observed in experimental studies of acute lung injury, such as reduction in the levels of inflammatory mediators or oxidative alveolar damage. However, several studies suggest that CO2 could exert deleterious effects on the lung, independent of pH levels. The effects of CO2 on lung tissue are summarised in Table 1. 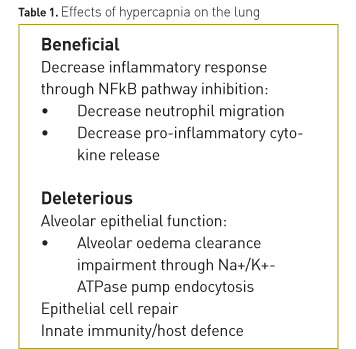 Several studies have shown that hypercapnia reduces ventilation–induced damage through its effects on mechanical stretch–induced injury:

At the cellular level, hypercapnia delays epithelial and alveolar repair of lung tissue induced by mechanical ventilation through the following mechanisms:

Effects of hypercapnia in the setting of ARDS 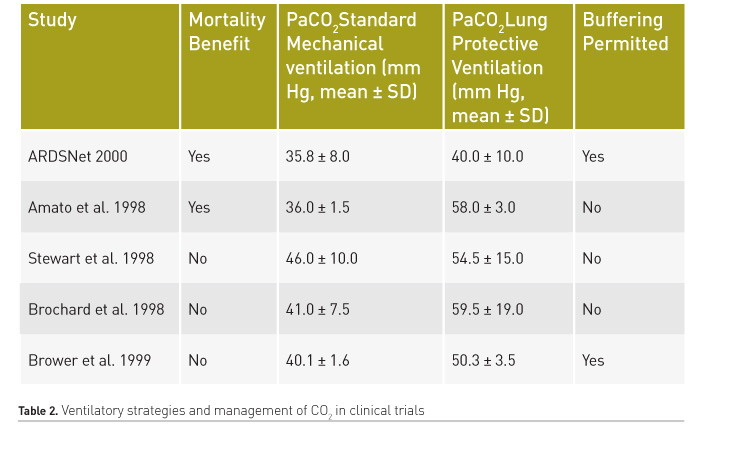 With the intention to determine whether, in addition to the effect of tidal volume reduction, there may be an independent effect of hypercapnic acidosis, the database of the ARMA trial was re–analysed (Kregenow et al. 2006). It was found that permissive hypercapnia reduced mortality in patients randomised to the higher tidal volume, but not in those receiving lower tidal volumes.

Although the approach of permissive hypercapnia is tempting, high levels of CO2 are not an easy partner for a patient with ARDS who suffers with low compliance, severe hypoxia, dyspnoea and high respiratory drive, and who requires a certain amount of sedation to allow the ventilator to take over their ventilatory distress.

Recently, in a secondary analysis of three prospective non-interventional cohort studies focusing on ARDS patients in 40 countries including a total of 1899 patients, it was found that severe hypercapnia (PaCO2 > 50 mmHg) was associated with higher ICU mortality compared to patients who kept normocapnia (OR 1.58, CI 95% 1.04–2.41; p = 0.032). Acidosis or the combination of hypercapnia and acidosis were independently positively associated with ICU mortality, as well as barotrauma, renal and cardiovascular dysfunction (Nin et al. 2017).

These findings are in line with those reported by Tiruvoipati et al. (2017). They performed a retrospective analysis including more than 250,000 patients receiving mechanical ventilation. They found that patients who developed hypercapnic acidosis (pH< 7.35 PaCO2 > 65 mmHg) during the first 24 hours of mechanical ventilation had a significantly higher mortality than those who had compensated hypercapnia or normocapnia.

In ARDS, the alveolar dead space (VDALV) is particularly interesting. VDALV comes from respiratory units that receive disproportionately low perfusion compared with ventilation (Q < V), resulting in an increase in West Zone 1 physiology. In many patients with ARDS, the disordered pulmonary ventilation-perfusion ratio results from endothelial injury, microvascular plugging with cellular aggregates and thrombi, and disordered pulmonary blood flow, leading to increased alveolar dead space (Tomashefski et al. 1983), decreasing CO2 clearance. Clinical interest in physiological dead space measurement was reawakened in 2002, linking dead space measurements to prognosis in ARDS (Nuckton et al. 2002). Physiological dead space was measured in 179 mechanically ventilated ARDS patients on the day of the syndrome onset. The mean dead space fraction (VD/VT) was 0.54 in eventual survivors and 0.63 in patients who succumbed to the syndrome, and the risk of death increased with every 0.05 increment in VD/VT. The physiological dead space measurement outperformed all of the previous prognostic measures including traditional measures of oxygenation impairment, lung compliance and illness severity (Nuckton et al. 2002). Unfortunately, in clinical practice, VD/VT measurements are uncommon. We believe that is due to poor understanding of dead space physiology and poor integration of CO2 waveforms and derived data with other monitoring systems. Based on the arterial CO2 measurements and predicted mixed expired CO2 concentrations, Siddiki et al. found that at both day 1 and day 3 of ARDS diagnosis, patients with a VD/VT in excess of 0.50 had a risk of death that increased with every additional 0.10 increment in VD/VT (Siddiki et al. 2010), a risk prediction that almost exactly equalled the predictive power of the complete CO2 measurements on ARDS patients described by Nuckton.

Mechanical ventilation: a life-saving procedure that can kill the lung

In the past 20 years, VILI has become one of the most studied topics in critical care (Tremblay and Slutsky 2006), confirming that mechanical ventilation not only damages lung tissue but even contributes to mortality. A major cause of VILI in the past was ventilation with high Vt, which was used to maintain adequate alveolar recruitment and mean airway pressures (Pontoppidan and Geffin 1972). Although the seminal ARDS Network trial gave the guidelines for ventilation with low Vt, it has been observed that up to 30% of patients with ARDS ventilated with Vt 6 ml/kg (IBW) show alveolar overdistension, generating VILI (Terragni et al 2007). It is worth noting other mechanical ventilator-associated complications such as ventilator-associated pneumonia (VAP), ventilator-associated diaphragmatic dysfunction (VIDD), and a range of neurological disorders associated with prolonged sedation and immobilisation (Melsen and Rovers 2009; Jackson et al. 2011; Jaber et al. 2011).

Recently the EuroELSO working group carried out a systematic review of current clinical experience with extracorporeal CO2 removal in the critically ill (Taccone et al. 2017). They included only studies with a proper control group (studies comparing extracorporeal CO2 removal to standard treatment). Six case-control trials with a total of 279 adult patients (142 treated with ECCO2R) were identified: three of them were performed in COPD patients with hypercapnic respiratory failure and three in ARDS patients; only two trials were randomised, both in ARDS patients, in which ECCO2R was applied to allow ultraprotective ventilation. No study was sufficiently powered to disclose an effect on relevant clinical outcomes such as ICU length of stay or mortality. The overall quality of the studies was low, with a high methodological bias, not allowing any conclusion to be drawn on the clinical effectiveness of ECCO2R in critically ill patients.

The Strategy of UltraProtective Lung Ventilation With Extracorporeal CO2 Removal for New-Onset Moderate to seVere ARDS (SUPERNOVA) trial (clinicaltrials.gov/ct2/show/NCT02282657), which has completed its first pilot recruitment of patients with moderate ARDS undergoing ultraprotective ventilation + ECCO2R, will show more data on the use of extracorporeal CO2 removal in this group of patients. In addition, a randomised clinical trial, pRotective vEntilation With Veno-venouS Lung assisT in Respiratory Failure (REST) is underway to observe 90-day mortality in patients with hypoxaemic acute respiratory failure who undergo ultraprotective ventilation with ECCO2R (clinicaltrials.gov/ct2/show/NCT02654327).

To date, the available literature does not have enough evidence to make clear recommendations for the use of this technique in the critical patient, and its use is currently experimental.

Should we use a buffer to treat acidosis?

The use of a buffer to treat hypercapnic acidosis remains a common clinical practice, although it is controversial.

The justification for its use is the physiological effects associated with extreme levels of hypercapnic and metabolic acidosis (pH < 7.10) (Forsythe and Schimdt 2000; Kraut and Madias 2010). In particular these are myocardial contractility depression and haemodynamic instability refractory to catecholamine infusion, in addition to the effects of acidosis on the central nervous system and the immune function, as well as metabolism reduction.

Specific concerns exist regarding sodium bicarbonate (NaHCO3), the buffer used most frequently in the clinical setting. Although the physiochemical effect of NaHCO3 is to increase the strong ion difference, the net effect is the generation of CO2, therefore NaHCO3 is an inappropriate therapy in patients with hypercapnic acidosis.

Tromethamine (THAM: tris-hydroxy-metylaminomethane) has been considered a better choice of buffer. THAM, by diffusing easily into cells, corrects pH and simultaneously reduces carbon dioxide levels. By increasing pH levels, THAM could mitigate the adverse effects of acidosis produced on the cardiovascular system and restore haemodynamic stability (Weber et al. 2000). However, it does not solve the problem of underperfused regions of the lung, which remain under severely alkalotic conditions, or control the PaCO2 in patients with high dead space (Pesenti and Patroniti 2010).

It is increasingly recognised that CO2 is much more than a waste product of cellular metabolism. Indeed, it is a potent biological agent that exerts multiple effects. Although the protective effects of CO2 have been observed in multiple models of acute lung injury, hypercapnia also exerts meaningful harmful effects. There is a clear need for robust evidence from well–powered RCTs to determine whether hypercapnia adds to or subtracts from the benefits of ventilation with low lung volumes and distending pressures.

ECCO2R may be a promising adjuvant therapeutic strategy for the management of patients in order to achieve protective or ultra-protective ventilation in patients with ARDS without life-threatening hypoxaemia. However, difficulties in predicting the progression of disease at an early stage may limit its use in clinical practice.

It would be interesting to analyse the impact of hypercapnia on outcome not only in the different forms of ARDS (mild, moderate and severe), but also to look at the impact of CO2 in patients at low and high risk for ARDS, and how they move from different stages according to CO2 levels and VD/VT, consider the causes of hypercapnia and target the ideal PaCO2 to best balance the favourable and unfavourable biological effects of hypercapnia.

Jackson DL et al. (2010) A systematic review of the impact of sedation practice in the ICU on resource use, costs and patient safety.Critical Care, 14(2): R59.

A comparison of hospital admissions of patients over 65 and air pollution in the USA has found an association between exposure... Read more

Out with the saline?

Reduced use linked to better outcomes Two companion studies have shown that use of saline as intravenous fluid therapy,... Read more