Immunotherapy Could Stop Resistance to Radiotherapy 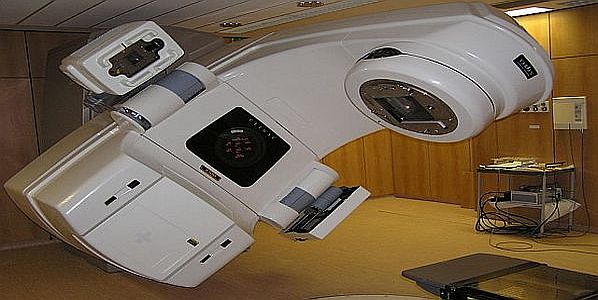 Share
Download PDF
Using immunotherapy and radiotherapy simultaneously to treat cancers could prevent some patients from becoming resistant to treatment, according to researchers from The University of Manchester (England, UK). Combining the two therapies enabled the immune system to hunt down and destroy cancer cells that were not killed by the initial radiotherapy in mice with breast, skin and bowel cancers, the research team said.

Around Half of All Cancer Patients Receive Radiotherapy

Radiotherapy is a very successful treatment for many forms of cancer, and data indicate that radiotheraphy is given to nearly half of all cancer patients. "(It) has been at the heart of helping improve survival rates so that today one in two cancer patients will survive for at least 10 years," said Professor Nic Jones, chief clinician at Cancer Research UK.

However, in cancer cells that radiotherapy does not kill it can switch on a "flag" on their surface, called PD-L1, that tricks the body's defences into thinking that cancerous cells pose no threat, the research team explained. Immunotherapy is able to block these "flags" to reveal the true identity of cancer cells, allowing the immune system to see them for what they are and destroy them. The approach improved survival and protected the mice against the disease from returning.

"Doctors and researchers are constantly looking for ways to improve treatments and this approach could open the door to a whole new way of giving radiotherapy," Prof. Jones noted.

Using the body's own defences to treat cancers has huge potential, with early phase clinical trials showing exciting patient benefit, said Dr. Simon Dovedi, the lead author based at The University of Manchester and member of the Manchester Cancer Research Centre. "(We) are still at the early stages of understanding how best to use these types of treatments. Combining certain immunotherapies with radiotherapy could make them even more effective and we're now looking to test this in clinical trial to see just how much of a difference it could make," Dr. Dovedi pointed out.

Results of the recent study with Cancer Research UK are very encouraging, according to Dr. Robert Wilkinson, Director of Oncology Research, MedImmune. He said that MedImmune "is committed to developing strong science led collaborations, and supporting research that helps further advance our scientific understanding in the important area of immunotherapy."

Cancer Research UK joined forces with The Christie NHS Foundation Trust and The University of Manchester to form the Manchester Cancer Research Centre, allowing scientists and doctors to work closely together to turn scientific advances into patient benefits sooner.

A recent study at the University of Eastern Finland (UEF) has developed a new technique based on bioimpedance that reduces image... Read more

A team of researchers at Rutgers University have developed a new medical imaging method that could help physicians detect cancer... Read more

Radiotherapy of the long bones (RTLB) is meant to provide control of symptoms, destroy cancer cells in the treated area and prevent... Read more

Cancer, Radiotherapy, immunotherapy Using immunotherapy and radiotherapy simultaneously to treat cancers could prevent some patients from becoming resistant to treatment, according to researc