#LIVES2019: Findings from the DIANA Study

Share
Download PDF
Liesbet De Bus of Ghent University Hospital, Belgium, presented the findings of the DetermInants of Antimicrobial use aNd de-escalAtion (DIANA) study @ESICM #LIVES2019 in Berlin.
Dr. De Bus started off by explaining the concept of de-escalation and how it is all about finding a balance between early adequate antimicrobial therapy on the one hand and reducing unnecessary exposure to antimicrobials on the other hand, mainly because of growing antimicrobial resistance.
Several single centre observational studies have shown a wide range of de-escalation rates between 25% to 81%. This is because of  different patient populations that were included and different definitions that were used.
Systematic reviews show that de-escalation has a positive impact on mortality, but findings from the well-performed randomised controlled group trial of the Leone group showed no impact of de-escalation on mortality. Their findings also showed a prolonged ICU stay in the de-escalated patients as well as a higher number of superinfections
The two primary goals of the DIANA study were to assess how often antimicrobial de-escalation is performed in the critically ill patient population and the impact of de-escalation on clinical cure at day 7 following the initiation of empirical therapy.
Adult patients critically ill were studied, and these patients had to be admitted to an ICU and had to have an anticipated need of more than 48 hours of ICU support. Empirical antimicrobial therapy had to be initiated for a suspected or confirmed bacterial infection, but the therapy had to be empirical, so the causative pathogen was not known at the time of initiation of therapy.
Patients were included during a two week time period going from October 2016 until May 2018.  Day zero was defined as the day of initiation of empirical therapy, and patients were assessed for clinical cure at Day 7. Data was collected until  Day 28.
De-escalation could be performed in two possible ways. One was the discontinuation of the antimicrobial in the case of empirical combination therapy or replacement of an antimicrobial with the intention of the treating physician  to narrow the spectrum of activity.  Deescalation had to take place on day three or earlier.
Patients were assessed for clinical cure at day 7 by the treating physicians. Clinical cure was defined as the survival of the patient and the disappearance of all signs and symptoms related to the infection under study.
Patients were grouped into two treatment arms: one was the de-escalation arm where the patient was de-escalated within three days following the initiation of therapy; and the non de-escalation arm where the patient was not de-escalated or was de-escalated later than day three.  Patients were assigned to these groups on day zero and were followed up until 7 days following randomisation. Unadjusted outcome analysis was also performed regarding 20-day mortality and length of stay in hospital and ICU.

1495 patients were included in the study and they were from 152 ICUs. Half of the patients were included in Europe. The median age of the patients was 65 years; 61.5% were males, and 2/3 of the patients were medical patients. 22% patients presented in septic shock on the day of initiation of empirical therapy. Half of the patients were exposed to antimicrobials prior to initiation of antimicrobials during the current hospitalisation and a little more than 10% had prior colonisation with multidrug-resistant pathogens.
The main source of infections were respiratory infections, which accounted for nearly half of the infections, followed by abdominal infections and urogenital infections. More than half of the included infections were microbiologically confirmed, and 20% had positive blood culture results. About 23% patient needed additional source control.
1 out of 4 empirical prescriptions contained carbapenem. Half of the empirical prescriptions were combination therapy. In 10% of the prescriptions, there was a second-hand  presence of causative pathogen that altered the treatment of the physician. The median total treatment duration was ten days.
During the first three days of empirical treatment, 63% of empirical prescriptions were unaltered. Only 16% of empirical treatments  were de-escalated on day 3 or earlier. There was a group of patients that had a modification of therapy, but that could not be classified as de-escalation mainly because these were patients who had a treatment escalation during the first three days or had treatment alterations to toxicity of the antimicrobial agent. Half of the de-escalation was performed  by discontinuation of a component of combination therapy and 35% by making a switch from a broad spectrum to a narrow spectrum agent and 13% o the changes were a combination of both strategies.
De-escalation was compared with continuation. Results show that de-escalated patients were exposed to healthcare more often compared to patients with treatment continuation. There was no difference in immunosuppression status and no difference in prior multidrug-resistant colonisation. De-escalated patients presented with more septic shock on day zero compared to continued therapy patients and they also had more need for source control. 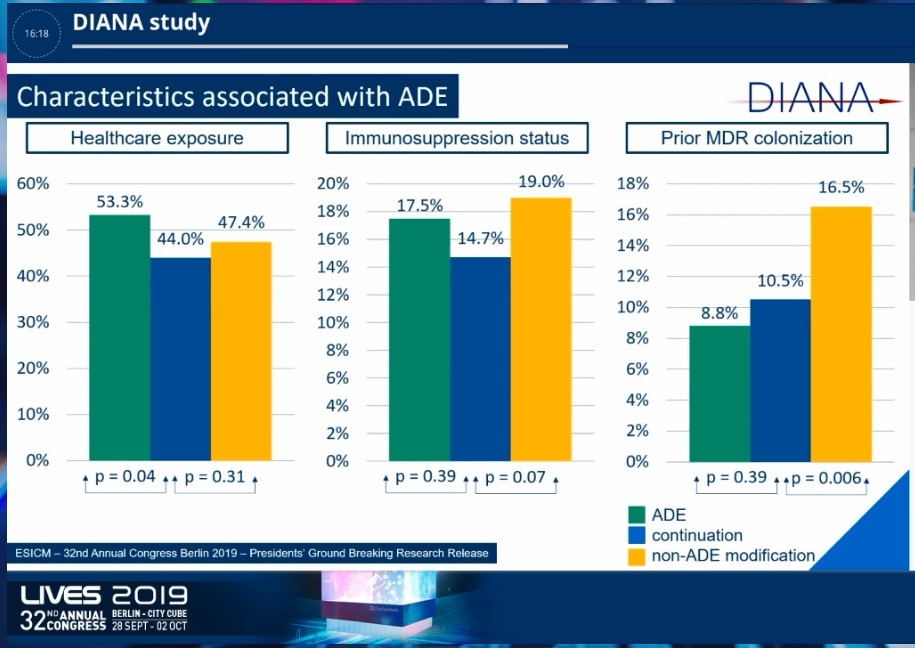 #LIVES2019: Findings from the NONSEDA Study

Palle Toft of Odense University Hospital presented the findings of the “No sedation compared to sedation with a daily wake-up... Read more

Dr. Alpha A. Fowler of Virginia Commonwealth University presented findings from the CITRIS-ALI trial that studied the role... Read more