Share
Download PDF
In an interesting session at #LIVES2019, Dr. Niels Van Regenmortel from Antwerp University Hospital, Belgium, presented findings from the TOPMAST trial. The TOPMAST study was conducted to determine the effects of sodium content of maintenance fluid therapy on cumulative fluid balance and electrolyte disorders.
Dr. Van Regenmortel started off his presentation by discussing five inconvenient truths of recognition that intensive care has to deal with. These include:
The TOPMAST trial was a single-centre randomised controlled double-blind trial. The hypothesis of the trial was that maintenance fluid therapy containing 154 mmol/litre of sodium leads to increased fluid retention compared to maintenance fluid therapy containing 54 mmol/litre of sodium independent of volume.
70 adult patients with a normal kidney functions were included in the study undergoing major thoracic surgery. This was a pragmatic trial. Patients were randomly assigned to receive maintenance fluids containing 154 mmol/L (Isotonic maintenance) or 54 mmol/L (Hypotonic maintenance) of sodium from the start of surgery until their discharge from the ICU (until the third postoperative day at the latest). Diuretics were only allowed to treat fluid overload and immediately triggered study termination and was counted as an adverse event The primary outcome of the study was net cumulative fluid balance. Secondary endpoints included an evaluation of electrolyte levels and electrolyte disturbances. Researchers also looked at safety endpoints like clinical or radiographical fluid overload, evolving and/or symptomatic hyponatraemia, and hyperkalaemia.
Study patients were randomised into two groups – 35 and 34 were analysed in the Na154 and N&54 respectively.There were no differences in baseline characteristics. All patients had a normal kidney function GFR was 104 and 107. There were no differences in characteristics of surgeries except for slightly longer surgical duration in the saline group - 40 minutes. All other fluid sources were exactly the same in both groups. With respect to the primary outcome, fluid balance was estimated at 72 hours. The volume of solutions was exactly the same in both groups, but 1.3 L was retained more additionally when the basic fluid was an isotonic group. Therefore, when you administer around 6L over three days of maintenance fluids, 22% more of that volume will be retained if this fluid is sodium rich. This could be an issue because gaining weight of 2 to 3 kg in the perioperative setting leads to increased morbidity. A big part of that intensified fluid retention is dependent on the choice of maintenance solutions. 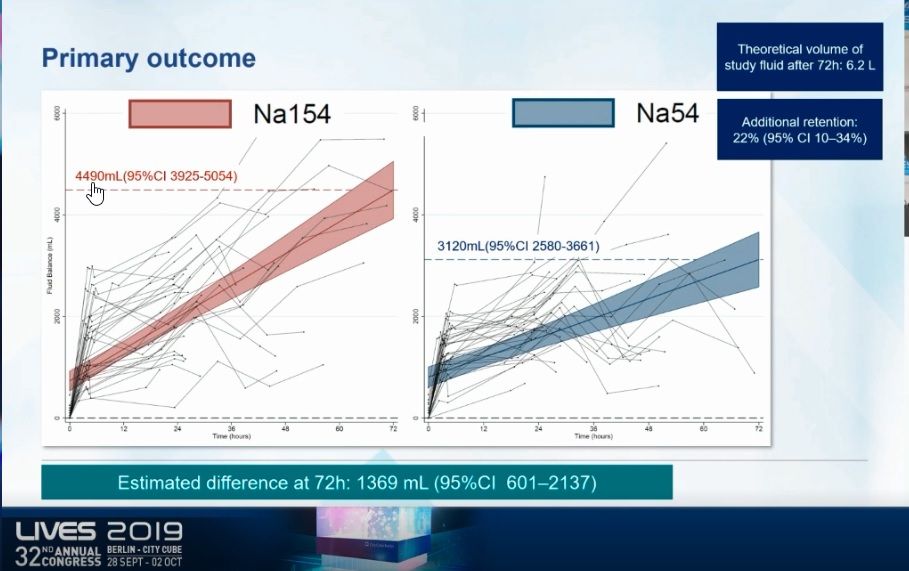 As far as secondary outcomes are concerned, serum sodium came down a little bit. There was more hyponatraemia in the sodium Na54 group, but there was no severe hyponatraemia below 135 mmol/L, and the study was not stopped for this reason by the treating clinicians and thus, this could be considered as a mild side effect in this population.
Saline is a chloride rich solution. Potassium chloride is frequently chosen as an additive as there is a need to cover daily potassium sources with maintenance solutions. Chloride levels increased in the patients, and it is already known that potassium levels are not the best thing to have in an intensive care unit. Nearly 70% developed hyperchloraemia when treated with this solution.
With respect to adverse effects, the study was stopped in 17.6% of patients in the isotonic arm due to clinical or radiographical fluid overload. This was not statistically significant, but there was a trend and thus was acknowledged as a possible safety signal, especially since the study was not powered for this outcome. There was also no more AKI. There was no need for renal replacement therapy, lowest P/F ratio did not differ, and there was no new-onset atrial fibrillation. There was, however another signal that warrants attention and which was observed in both groups. There was no significant difference in creatinine levels, but serum NGAL was significantly higher in the isotonic arm.
Dr. Van Regenmortel concluded that sodium content of maintenance fluids contributes to fluid retention independent of their volume. This is mainly because kidneys handle sodium sluggishly if administered in higher doses that a patient’s steady state sodium intake, and this is even true in patients with perfectly normal kidney function. Hypotonic maintenance solutions lead to more hyponatraemia, but it was mild and asymptomatic in this study. Isotonic maintenance fluids can lead to hypercholoraemia. When giving potassium as KCI, balanced solutions may not help avoid this.
Source: Dr. Niels Van Regenmortel’s presentation @ESICM 2019
Image/Slide Credit: Dr. Niels Van Regenmortel