#LIVES2019: Findings from the NONSEDA Study

Share
Download PDF
Palle Toft of Odense University Hospital presented the findings of the “No sedation compared to sedation with a daily wake-up trial. A prospective randomized multicentre study - The NONSEDA-study” @ESICM in Berlin. The NON-SEDA study is a Scandinavian multicentre study conducted in Denmark, Norway, and Sweden that compared non-sedation with light sedation or arousable sedation. Only 8 intensive care units were included, but as Prof. Toft pointed out, it was because it's not about a drug, it's about a change of culture.
The study was conducted with 700 patients. The main inclusion criteria was intubation and mechanical ventilation for more than 24 hours. Prof. Toft explained that in their hospital, they have used the non-sedation strategy for the last 20 years and that they do not think that an oral tube is an absolute indication for sedation. Patients can remain nonsedated as long as they are treated for pain.
He also pointed out that the NON-SEDA study was conducted after findings from a single centre study they had conducted showed that patients had more non-ventilator days in the non-sedation group and a shorter length of stay in the ICU. They had also found a nearly significant survival benefit in the nonsedated patients in the single centre study. The goal of the NON-SEDA study was to confirm these findings.
The primary outcome of the trial was 90 days mortality after randomisation. Explorative goals of the study included organ failure and coma free delirium free days. Secondary endpoints included:
Patients were well balanced at baseline. However, findings from the NON-SEDA study did not show a survival benefit in the nonsedation group. Mortality was identical in the two groups so the hypothesis could not be confirmed.
With respect to the secondary endpoints, thromboembolic events were significantly less in the nonsedation group compared to the sedation group. Kidney function evaluated by the Rifle score was more improved in the non-sedation group compared to the sedation group, and more patients in the sedation group were in need of continuous renal replacement therapy (CRRT) compared to the non-sedation group. Patients who survived in the ICU discharge had a higher SOFA score in the sedated group as more patients needed CRRT. However, the number of ventilator free days were nearly the same. Number of ICU free days were nearly identical, and hospital days was maybe one day more in the nonsedated group which is clinically insignificant, and at the end of 90 days, there was no difference.
Physical function was found to be superior in the non-sedation group. and at ICU discharge. The Barthel index is a measure of physical independce and it was significantly higher in the nonsedated group. 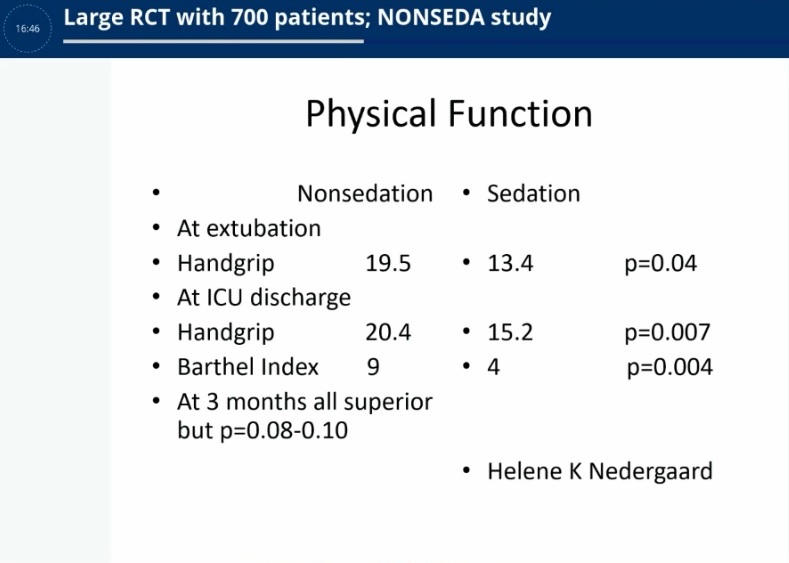 «« #LIVES2019: Should We Treat Fever in Critically Ill Patients Without Acute Brain Pathology?

Dr. Alpha A. Fowler of Virginia Commonwealth University presented findings from the CITRIS-ALI trial that studied the role... Read more