Share
Download PDF
Dr. Alpha A. Fowler of Virginia Commonwealth University presented findings from the CITRIS-ALI trial that studied the role of vitamin C in patients with septic ARDS. The findings were presented @ESICM in Berlin and have just been published in JAMA.
The CITRIS-ALI randomised trial addressed the use of high dose intravenous vitamin C to study the effects of organ failure and the effects of vitamin C on inflammation and vascular injury biomarkers in patients with sepsis inducted ARDS.
As Dr. Fowler pointed out, there is a global scourge of sepsis. Fleischmann and colleagues in 2016 reported that in first and second world countries, the incidence of ARDS was 31 million individuals with greater than 6 million deaths.This study did not include third world countries where medical care is less than what is practiced in first and second world countries.
In the Lung Safe Trial, Bellani and colleagues showed that 10% of patients admitted to ICUs developed ARDS. There is 25% mortality among these patients and this is also dependant on co-morbid conditions that lead up to the development of sepsis and ARDS. Its important to understand that patients who survive ARDS suffer long term morbidity, disability and there is a high frequency of PTSD. It was recently published that patients surviving ARDS have a heightened mortality in the five years after they have developed ARDS and survived the condition.
The thrust of this talk was about sepsis induced ARDS. ARDS was first described in 1967 in a non-military setting at the University of Colorado. In the five decades since then, there has been tremendous basic science and clinical science research but no effective pharmacotherapy has ever occurred throughout all these years.
Borrelli and colleagues in the mid-90s showed that low levels of plasma vitamin C was a constant feature in sepsis patients. They also showed that low plasma vitamin C levels inversely correlated with the incidence of multiple organ failure and correlated directly with survival. Low levels, low survival.
The question is: will repletion of vitamin C alter the outcome of sepsis induced ARDS? Determining that was was the goal of the CITRIS-ALI study.
Dr. Fowler explained that even high doses of intravenous vitamin C when given orally do not achieve any kind of heightened plasma level concentrations. A normal diet maintains humans at about a level of 70 μM. Even supplementing someone to over 1gm of vitamin C never achieves a level of greater than 200 μM. The increasing concentrations infused intravenously give higher concentrations in the plasma. When plasma vitamin C reaches these high levels, it becomes more than a vitamin. It becomes an anti-inflammatory agent.
When vitamin C is infused into the circulation, it immediately binds to the active sodium-vitamin C transporter 2. It is then actively transferred across vascular endothelium into the interstitial space of lung where it is picked up by the sodium-vitamin C transporter 2 and pushed into the alveolar space. Vitamin C penetrates from plasma all the way into the alveolar space which makes it particularly effective as a target treatment for ARDS. 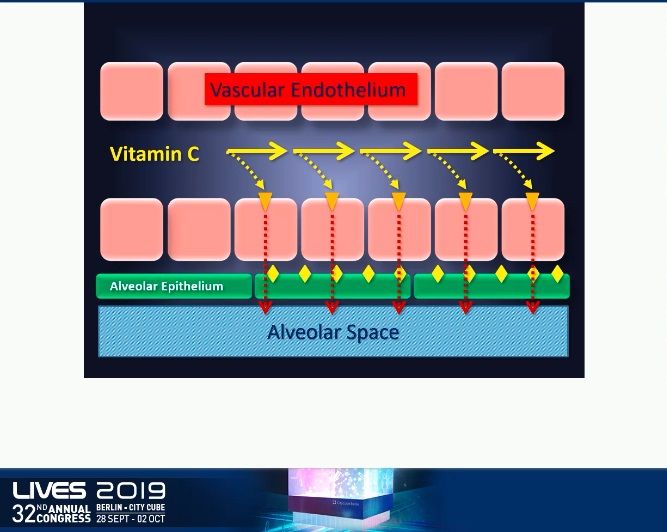 The CITRIS-ALI trial studied sepsis induced ARDS. There were 7 enrolment sites. The primary outcomes were modified Sequential Organ Failure Assessment (mSOFA) scores at 96 hours and plasma biomarker levels (C-reactive protein and thrombomodulin) at 168 hours. Secondary outcomes included all-cause mortality at day 28, ventilator-free days to day 28, ICU-free days to day 28, and hospital-free days at day 60.
167 patients were randomised, with 83 assigned to placebo and 84 to vitamin C. Patients received 50mg/kg of body weight every 6 hours infused. This was continuous over a 96 hour period.
As per the findings of the study, there was no statistically significant difference in mSOFA scores between placebo and the vitamin C–infused patients from enrollment to 96 hours. There were no significant differences between the vitamin C group and placebo group in the C-reactive protein levels or thrombomodulin levels. Prespecified secondary outcomes were not significantly different between the vitamin C group and the placebo group.
Overall, in this study of patients with sepsis and ARDS, a 96-hour infusion of vitamin C compared with placebo did not significantly improve organ dysfunction scores or alter markers of inflammation and vascular injury. Placebo patients had a 46% mortality while the vitamin C patients had a 30% mortality which was maintained to day 60. High dose infused vitamin C was safe, but there was no effect on modified SOFA scores or biomarkers. However, there was a treatment effect that was significant for ICU free days at day 28, hospital free days at day 60 and a 28 day all cause mortality which was reduced by infusing vitamin C in patients with septic ARDS.
Plans are in place for a much larger trial to further evaluate the impact of vitamin C and the exact dose that could potentially have an impact on patients with septic ARDS.
Source: Dr. Alpha A. Fowler's Presentation @ESICM 2019
Image/Slide Credit: Dr. Alpha A. Fowler


#LIVES2019: Should We Treat Fever in Critically Ill Patients Without Acute Brain Pathology? »»

Sepsis is a major cause of death among hospitalised patients. It affects nearly 6% of all admissions and results in in-hospital... Read more

Sepsis, Vitamin C, ARDS, #LIVES2019, @ESICM, ESICM 2019 Dr. Alpha A. Fowler of Virginal Commonwealth University presented findings from the CITRIS-ALI trial that studied the role of vitamin C in patients with septic ARDS. The findings were presented at @ESICM in Berlin and have just been published in JAMA.