Share
Download PDF
Critical care does not only happen in the ICU, but how can emergency medicine and intensive care medicine work optimally together? Several models were presented at the 2015 European Society of Intensive Care Medicine (ESICM) congress in Berlin 3-7 October.

Intensive care and emergency medicine do have a symbiotic relationship, said Jean-Louis Vincent, Brussels. “We need to go out of the ICU and act earlier to admit  patients earlier in the ICU before cardiac arrest, before  septic shock, and try to stabilise them so they stay in the ICU for a shorter period of time”, he said. He outlined the successful implementation of a shock lab at Erasme University Hospital, accessible to and staffed by both the emergency department (ED) and ICU. It is a dedicated area physically located between the emergency department and the department of intensive care. The patients can come from the ED,  from the ambulance as well as from the floor.

In Innsbruck, Austria, a combined emergency and intensive care medicine department was the solution to a number of issues, according to Michael Joannidis. Patient numbers were increasing in the ED (3-5% per year),there was a constant staff shortage in the ED and a lack of experienced senior staff. The resuscitation rooms lacked structured management, and were managed “almost by chance”, said Joannidis. Patients were  treated on the basis of “first come first served”, and there was a high rate of delayed ICU admission. From the ED 30% of patients were admitted to the wards. Only a small proportion were being admitted to the Medical ICU, the Coronary Care Unit or the intermediate care unit. A significant number of medical patients had to be sent to other ICUs. 6.3 percent of critically ill patients were searching for beds, and unexpected ICU admissions from the wards were around 1.1 percent. With an ageing population, they are seeing more patients with congestive heart failure and pneumonia. The combined department is a response to all these issues, and especially to avoid delays in ICU admission, a known risk factor for mortality.

Reorganisation
In the combined department intensivists take the leading role. The head of department and the staff are qualified in internal medicine and intensive care. They have introduced the Manchester Triage system, structured resuscitation room management and trained all rotating and staff physicians and nursing staff in the triage system. The resuscitation rooms are equipped with ultrasound and staff have received specific noninvasive ventilation training. Since the reorganisation the frequency of resuscitation room usage for unstable patients nearly doubled, and the rate of direct admissions to the ICU increased.

Joannidis observed that most intensivists prefer work in the ICU over work in the ED, except in the resuscitation room). Several factors contribute to staff dissatisfaction, he explained. The ED is receiving constantly increasing numbers of non critically ill patients in the ED, and admission to normal wards remains difficult. There is a high workload and too much heteronomy. Around 15-20 percent of their patients are above 70 years of age so the ED liaises with home care and social services. 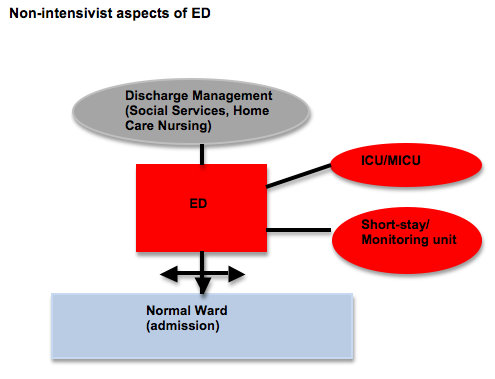 Having an ICU within an emergency department has worked well for one Austrian hospital, according to Michael Holzer, Vienna. The City Hospital in Vienna has 15 ICUs with a total of 150 beds. The Department of Emergency Medicine was founded in 1991, and is a multidisciplinary emergency department located next to the radiology and trauma departments. The ED does not handle trauma or paediatric cases.  The cardiology cath lab is on the same floor.

Rationale
1. Some intensive care is already going on in the ED.
Explaining the reasons for this structure, Holzer cited Fromm’s study from 1993, showing that critically ill patients spend a lot of time in the ED, with  a mean stay of 145 minutes and a maximum stay of 655 minutes.  Varon et al.’s study (1994) found that 82 percent of patients received one or more critical care procedures while in the ED, and had a mean stay of 284 minutes with a maximum of 355 minutes.  Green et al. (2009) found that patients admitted to the ICU from the ED already received critical care procedures while in the ED, including intubation, central venous access and arterial catheters.

2. Worse outcomes if ICU is not in the ED
Chalfin et al. in a 2007 study found that critically ill emergency department patients with a delay in ICU transfer of more than 6 hours had increased hospital length of stay and higher mortality. Hung et al. (2014) found that for mechanically ventilated patients in the ED, a delay in ICU admission is associated with higher probability of mortality and additional resource expenditure. For that reason they recommended a wait of no more than 4 hours for ICU admission.

Why Run an ICU in an ED? 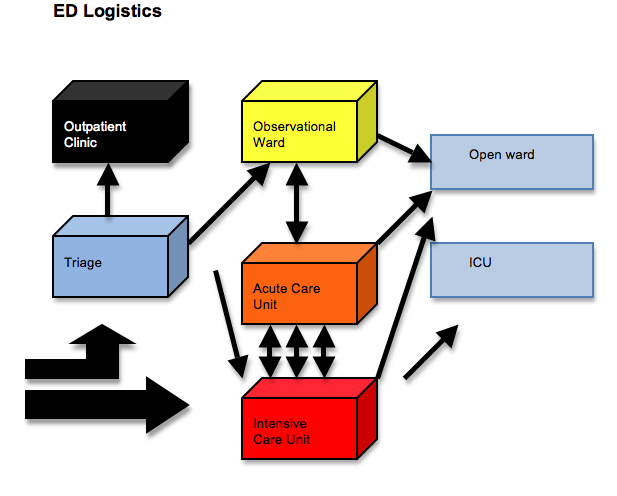 This model prompted some lively discussion from delegates, who suggested this was a model applicable to large city hospitals,  in effect a decentralised ICU, with a small staff there for only a few patients in the ICU. What might be better was to have a smooth system to bring patients rapidly to the intensive care unit. Rapid triage from the ED to the ICU may address such capacity problems, and this was in some ways an emergency solution for an emergency problem.

Jukka Takala, Bern, presented a model of having intensivists as part of the medical emergency team (MET). METs traditionally focus on hospitalised patients who develop acute problems. Following analysis of their emergency (unplanned) admissions they decided to implement a MET with an intensivist. Around half of ICU admissions were unplanned; of these around 55 percent were from the ED, and these have the highest priority. 28 percent of ICU admissions came from the hospital wards and 17 percent from intermediate care units.

Looking  at  ICU admissions from the ED, they checked which met the criteria for the MET, both at admission to the ED and the highest score during the ED stay. The MET score has predictive value for hospital mortality, the need for mechanical ventilation and haemodynamic instability. They used the criteria outlined in Etter et al. (2008). Once a patient’s MET score increases, there is an increasing likelihood of needing mechanical ventilation, and  other support. They also looked at ED risk assessment. They found that the simple physiological scoring system, the vital sign score (VSS), within the first 15 minutes of ED admission is highly predictive of hospital mortality, can be rapidly evaluated by the first health care professional, may help to design interventions for faster and more systematic identification of patients at risk of unfavourable outcomes, and may help avoid delay in treatment and organ function support. It is basically a triage tool.

Coslovsky, Takala et al. set out to create a clinical prediction model (2015). The predictors in the final model were age, prolonged capillary refill time, blood pressure, mechanical ventilation, oxygen saturation index, Glasgow coma score and APACHE II diagnostic category. The predicted and observed risk of death was lower than 5% in more than 80% of patients. It has substantial discrimination in the higher risk of death patients compared with subjective triage nurse estimate of risk (scale 1-10): nurse risk estimate predicted a higher risk of death with a higher degree of variability in patients with mortality below 5% and the nurse risk estimate predicted a lower risk in patients with highest mortality risk. The model derived from readily available patient characteristics, physiological parameters and treatment interventions during the first minutes after ED arrival was a strong indicator for the subsequent risk of death.

The model used has better prediction than subjective assessment alone. It facilitates the identification of patients with higher mortality risk who might be otherwise missed, and may facilitate more rapid identification and commencement of treatment of patients at risk of an unfavourable outcome. It might be used to design interventions and help to recognise the risk of futile care.

The MET is now in place for patients presenting in the ED. As with most rapid response systems, there are structured criteria to go through before making the call. The system is available 24/7 and there is a single point of contact. The MET evaluates the patient within 10 minutes from the alarm. They are equipped with a comprehensive acute care set. They perform the primary diagnostics and stabilisation, involve the primary care team and take further steps. The implementation is described in a paper by Etter et al. (2014). Immediately after implementation they saw length of stay for emergency admission from hospital wards became shorter. Cardiac arrest calls decreased by almost 50%.  The team averages 1-1.5 calls per day. The resource needed is not huge, said Takala, so it can be done with the usual staff in the ICU. They receive fewer calls during the night shift. Takala concluded that the system has helped to optimise processes and cooperation between the ED and the ICU. The long term effect on processes and outcomes must be followed up, and they are continually monitoring how the results evolve.

Martin Dünser rounded off the session with a look at pre-hospital care by physicians. It makes sense, he said, because as intensivists we care for critically ill patients all day, and we are best trained to transfer critically ill patients. We can bring ICU techniques into the field where it’s meaningful,  particularly noninvasvive ventilation for patients with COPD exacerbation and hypertensive pulmonary oedema, for example. There are even pre-hospital ECMO services. Intensivists in the emergency team can bring the ICU decision-making into the field, for example for prehospital cardiac arrest. “Bringing ICU decisions into the field will have high impact - it can place the patient trajectory far into the hospital system”, said Dünser. 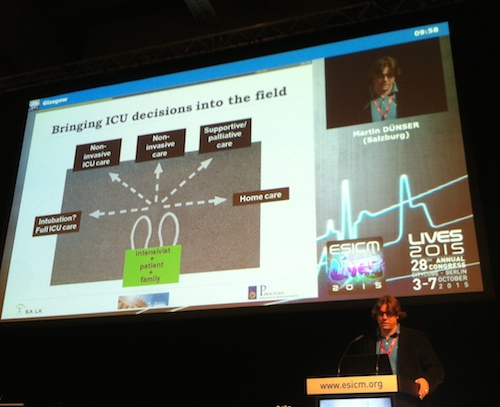 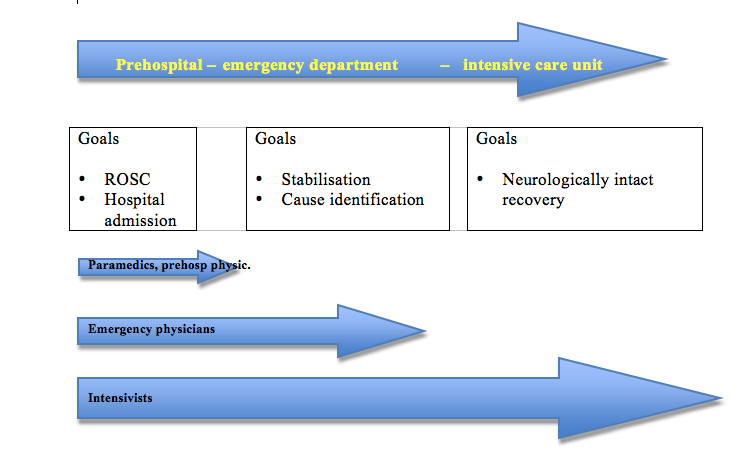 Tracheostomies are among the most common procedures performed in critically ill patients, and intensive care nurses can take an... Read more

Using a survey, with eight cases differing only in regard to the gender of the patient, researchers in Sweden have demonstrated... Read more

Joint US-Chile research has confirmed copper as an additional weapon in the fight against healthcare-associated infections,... Read more