Share
Download PDF
Findings of new research published online in the journal Radiology indicate that ultra-high-field magnetic resonance imaging (MRI) offers detailed views of a brain area implicated in Parkinson’s disease, a discovery which could potentially lead to earlier detection of this condition affecting millions of people globally.
A chronic, progressive disease characterised by shaking, stiffness, and impaired balance and coordination, Parkinson’s disease is challenging to diagnose. There are no radiologic techniques available to assist clinicians in their assessments and having to rely on medical history and neurological examination alone, it is frequently difficult to distinguish Parkinson’s disease from other conditions.
Together with a team of colleagues, Mirco Cosottini, MD, from Italy’s University of Pisa, conducted a study of the brains of 38 individuals, including 17 Parkinson’s disease patients and 21 healthy controls, as well as a brain specimen from a deceased individual, in order to assist in the determination of ultra-high-field 7-Tesla (7-T) MRI’s accuracy for diagnosing Parkinson’s disease.
By using the 7-T MRI, the team successfully distinguished a three-layered organisation of the substantia nigra (SN), a crescent-shaped mass of cells in the midbrain. The loss of dopamine-producing cells located in this region of the brain cause Parkinson’s disease as dopamine is an vital neurotransmitter involved in multiple brain functions, including behavioural and motor processes such as reward, mood, stress and addiction.
The researchers were able to correctly classify patients with Parkinson’s disease with a sensitivity of 100 percent and specificity of 96.2 percent based on abnormalities in the SN identified by the 7-T MRI.
For Dr Cosottini these findings appear promising for earlier detection of the disease, which in turn would speed the initiation of treatment. While Parkinson’s disease diagnosis remained clinically based, the introduction of 7-T MRI into clinical practice allowed for a supporting radiologic diagnosis to be made.
Furthermore, the team of researchers is now investigating the clinical utility of 7-T MRI in a number of other neurodegenerative diseases, including mild cognitive impairment, which is a precursor of Alzheimer’s disease.
Title Image: Figure 1. Images show axial spin-echo proton density (on the right) and GRE (on the left) of the SN at level I of an ex vivo brain sample in a 67-year-old woman. There is a triple-layered organization of the SN comparable to that showed in the in vivo images. Ventrally a low-signal-intensity layer (b) is attributable to the pars reticulata of the SN. In the middle part of the SN, a hyperintense band (c) corresponds to the ventral component of the pars compacta of the SN. The lateral part of this layer shows a high-signal-intensity spot (c1) corresponding to the oval shape hyperintensity of the in vivo three-dimensional multiecho susceptibility-weighted images that resemble the nigrosome formation. The dorsal hypointense layer visible on both spin-echo and GRE images (d) is re¬ferred to the dorsal component of the pars compacta of the SN. a = crus cerebri, e = brachjum conjunctivum, f = medial lemniscus, g = lateral lemniscus, h = central tegmental tract. 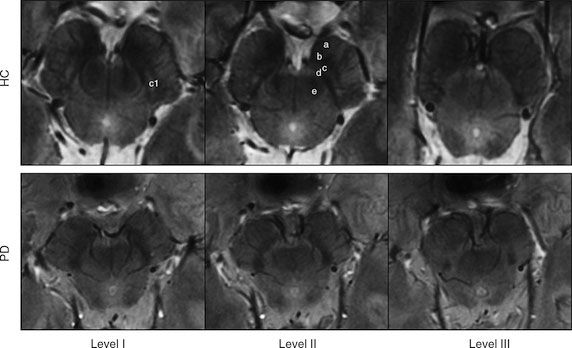 Figure 2. Top row: 7-T three-dimensional multiecho susceptibility-weighted in vivo images of SN in healthy 64-year-old man, located between the crus cerebri (a) and the red nucleus. Axial sections perpendicular to the floor of fourth ventricle are obtained at level of the inferior third of the red nucleus (level I), at the level of decussation of superior cerebellar peduncles (e) (level II), and at the level of the inferior colliculi (level III). At level I, SN appears as homogeneous hypointense structure in the medial part of the cerebral peduncle, and is laterally constituted by a hyperintense oval area between two hypointense layers (c1). At level II, a trilaminar organization of the SN with a central hyperintense layer (b) between two hypointense tiers (c and d) is detectable. At level III, the dorsal hypointense lamina could be detected as a small residual lateral hypointense area, while the hyperintense layer fades into the isointense cerebral peduncle. Bottom row: 7-T three-dimensional multiecho susceptibility-weighted in vivo images of the SN in PD patients. The loss of normal anatomy of the SN in a 61-year-old man with PD is characterized by the disappearance of the oval-shape bright spot in the lateral part of the SN at level I and by the loss of the hyperintense intermediate layer of the SN at level II. HC = healthy subject.
Source: RSNA
5 March 2014

MEDIAN Technologies will present results of a study:  “Identification of measurable lesions: an opportunity for improving... Read more

Distortion-free imaging in the hybrid OR with 30 cm x 30 cm and 20 cm x 20 cm flat-panel options At this year’s ECR congress,... Read more

With its customer driven design, amazing usability and freedom of movement, Agfa's DR 100s offers your facility a new force in mobile imaging. Combining a remarkably narrow width and light weight with a powerful generator and imaging processing, it puts...