But while SSA shoulders 25% of the world’s burden of sudden cardiac arrest, only 3% of the world’s healthcare workforce are located there (Aufderheide et al. 2013). In SSA, prehospital emergency care systems have significant variation in quality. They range from well-developed systems of care that rival first world systems to informal community-based systems using taxi and bus drivers to community members that use wheelbarrows (Naidoo 2011) and even ox-wagon transfers (Hauswald and Yeoh 1997).

In Southern Africa, prior to 1987, there was no uniform resuscitation approach to the critically ill patient. Different organisations utilised different guidelines developed for either the least resourced (World Health Organization) or for developed health systems (American Heart Association, European Resuscitation Council, Japan). During a resuscitation attempt, healthcare professionals often differed on preferred resuscitation sequence and technique, leading to decreased team performance and concern for suboptimal patient outcomes. In March 1987, the Heart Foundation of Southern Africa convened the first South African National Basic Cardiopulmonary Resuscitation (CPR) Symposium, attended by 513 CPR Instructors from around the country, followed by a National Workshop a year later, where uniform standards and guidelines for the teaching, training and performance of basic life support were developed through consensus and provided the foundation for South Africa’s national guidelines (Kloeck 1990). The Resuscitation Council of Southern Africa was formed to promote basic and advanced life support techniques relevant to all of Southern Africa: both South Africa as well as its resourcepoor neighbouring countries.

In 1992 the American Heart Association held the National Conference on CPR and Emergency Cardiac Care. Recognising the expertise that existed within national and regional councils across the globe, the AHA invited representatives from existing councils from Europe, Australia, Canada and Southern Africa. Over 25 countries and 53 international organisations were represented, and 25% of the delegates came from outside the USA (Chamberlain and Cummins 1993). It was at this conference that the decision was made to form an International Liaison Committee on Resuscitation (ILCOR), which would offer support to develop effective emergency systems of care, a permanent infrastructure for collaboration and support for universal guidelines.

Since its formation, ILCOR has produced numerous statements to increase the impact of resuscitation (Chamberlain 2005). Unfortunately, many of the ILCOR statements require further adaptation by resource-limited countries, and often adaptations are necessary due to cost or therapy instead of cost-effectiveness of a functioning system. Examples include the relative lack of public access defibrillation and slow ambulance response time due to vast travel distances.

The implementation of basic and advanced adult and paediatric life support training has gained enormous popularity in Southern Africa. This contextualised training is based largely on the guidelines of the American Heart Association but modified to include the use of local devices and improvisation techniques. The high cost of training materials and equipment have been a major deterrent, particularly due to a lack of availability in most parts of Africa. The Resuscitation Council of Southern Africa has added to the improvement in resuscitation training with the addition of simple memory aids to improve resuscitation team performance and communication— namely the “9 ALS triads” (Kloeck 2001) and the “10 step zig-zag approach”—to the 5Hs and 5Ts in pulseless electrical activity management (Kloeck 1995).

The review included 7 studies which met the GRADE evidence review process. The summary of findings revealed no “golden bullet approach” that would improve training in lowincome settings. These findings are limited to the 7 studies reviewed and therefore did not include all the different training modalities available globally.

The recommendation from the ILCOR Task Force suggests “alternative instructional strategies would be reasonable for BLS or ALS teaching in low-income countries (weak recommendation, low quality of evidence). The optimal strategy has yet to be determined” (Finn et al 2015). Some of the concerns around making recommendations in low-income countries are the cost of and access to training, which may play a large role in the ability of healthcare workers to receive training in BLS and ALS. The educational resources from one country to another as well as within a country (e.g. Johannesburg a “first world” city vs Manguzi a “developing city”) vary and therefore a ‘one size fits all approach’ cannot be used.

Does this mean that third world countries cannot use the developed world’s courses and teaching approaches? We are proud to say “No!” Recently we were involved in running the Society of Critical Care Medicine (SCCM)’s Paediatric Fundamentals in Critical Care Support Course (PFCCS) in Gaborone (Botswana). This two-day short course includes pre-reading, a pre-test, practical and post-course evaluation and is considered a very intensive cognitive and skills-based course. Two PFCCS courses were conducted at the University of Botswana in February 2016. Thirty-five participants took part, and completed a brief demographic survey as well as the SCCM PFCCS pre-test and post-test at the end of the course.

Demographic data and matched test scores were de-identified for each participant and tabulated and evaluated. An increase in the score between the pre- and post-test was considered a measure of knowledge accrual. Data was reported as mean and standard deviation and compared using a paired t-test with statistical significance at 0.05.

Of 35 participants, there were 32 (91%) physicians and 3 (9%) nurses. Physician specialty groups were general paediatricians (69%), emergency medicine (9%), surgeons (3%), and anaesthesiologists (3%). 27 Participants worked in the major University-affiliated hospital (61%), 2 in a private hospital (6%) and 6 from district hospitals (17%). There was an improvement of mean test score results from 67% correct on the pre-test to 79% correct answers on the post-test [p value < 0.001]. Therefore in conclusion “participation in the PFCCS course led to increased knowledge accrual regardless of participant level of training or experience. Even in a resource-limited setting, the concepts of critical care imparted by this course could prove invaluable in improving outcomes in critically ill children” (preliminary data – Afonso et al.)

Currently in Southern Africa and extending to Central Africa is a programme originally designed by the American Heart Association’s Pediatric Emergency Assessment Recognition and Stabilization Course (PEARS), which has been modified specifically to the needs and medical protocols of the Botswana Minstry of Health, and is known as the Saving Childrens’ Lives programme (SCL). The SCL programme includes the base PEARS course, which is a two-day immersive instructor-led programme involving pre-reading, lectures, skills stations and real-time audience post-test evaluation. Under direction of this author group and ILCOR collaborators, Saving Children’s Lives is a multifaceted implementation strategy designed to improve care of the acutely ill child in the community. It is based on embedding high quality active in-service training with existing health management structures of quality improvement and resource allocation. Since inception in January 2014, preliminary data from the Ministry of Health and Wellness indicates the Saving Children’s Lives programme has been associated with a 41% reduction in neonatal deaths, 57% reduction in infant (1m to 1 year of age) deaths, and 58% reduction in children aged 1-5 years. In contrast, non-participating district hospitals within the same system only averaged modest reductions in mortality (0.3%, 5.5%, and 37% respectively). There has been a 26% reduction in patient hospital days and 24% reduction in transfer to higher level facilities. There has been a shift of hospital admissions from the district hospital to the primary hospital, which may signify prompt treatment early, leading to less need for transfer to a higher level facility. Prior to SCL programme implementation, the district hospital had the highest infant mortality in Botswana. Now it has the third lowest infant mortality (preliminary data – Meaney and Kloeck). 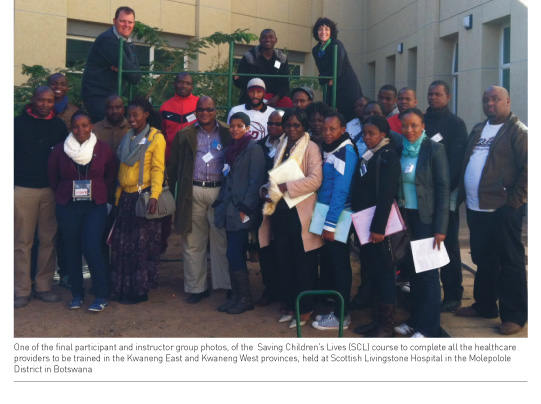 In South Africa, over the past 5 years (2012–2016), a total of 14,440 Advanced Cardiovascular Life Support (ACLS) providers, 4826 Paediatric Advanced Life Support (PALS) providers and 1543 Neonatal Resuscitation Programme (NRP) providers have been trained in this internationally accepted intensive short course resuscitation training (resus.co.za). These numbers are under-reported totals as there are other International Training Centres (ITCs) not affiliated to the Resuscitation Council of Southern Africa (RCSA) offering these short courses, and therefore the numbers quoted are the minimum recorded trained by those centres affilated with the RCSA. These courses are attended and offered to all areas in Southern Africa from the major cities to the more primary (rural) and secondary level centres. Other articles in this issue focus on the incredible “first world” directions in resuscitaion outcomes such as prognostication and extracorporeal support during resuscitation. South Africa is proud to report that we have successfully transported our first paediatric ECMO patient via our local helicopter emergency service in March this year. As one can see, some of the difficulties we have are the huge variations in what can be offered to patients, from ECMO transport to the ability of adequate BLS services within the same country. From the above, there certainly are major attempts to improve resuscitation training in low-income areas. However, data is sparse on exactly the “how” but what is encouraging are the many local and international organisations who are trying to make a difference in resuscitation training and therefore outcomes in Southern Africa.

Chamberlain D (2005) The International Liaison Committee on resuscitation (ILCOR) – Past and present. Resuscitation, 67: 157-61.

Physiotherapy in the ICU e-learning programme

Development and evaluation of a module as part of an undergraduate international honours degree programme Preparing undergraduate students... Read more

This article describes the nature of FOAM (Free Open-Access Medical education), its strengths and weaknesses, and how it can... Read more

Effective education for palliative care: communication as a procedure

Palliative care for critically ill patients in the intensive care unit is increasingly in the mainstream, and palliative... Read more

According to the World Bank classification, Tunisia is considered a lower middle-income country, corresponding to a country with... Read more

How to Run Successful Rounds in the Intensive Care Unit