Extracorporeal Cardiopulmonary Resuscitation: Who Could Benefit?

This article summarises the current ratio and scientific evidence on which cardiac arrest patients could benefit from extracorporeal cardiopulmonary resuscitation.

Acute cardiac arrest has a dismal prognosis even when advanced cardiac life support is initiated without delay. Extracorporeal cardiopulmonary resuscitation (eCPR) refers to a technique which uses an extracorporeal life support system to re-establish vital organ blood flow despite ongoing cardiac arrest. Although the technique was suggested for this indication already in the 1960s (Kennedy 1966), the use of eCPR in patients with cardiac arrest only became more common after the widespread availability of extracorporeal life support systems in response to the influenza H1N1 pandemics. In cardiac arrest patients undergoing eCPR, the femoral vein and artery are accessed with large bore cannulas during resuscitation. After insertion, the cannulas are connected to a pump-driven extracorporeal circuit,which drains blood from the inferior vena cava, passes it over a membrane oxygenator and delivers oxygenated and decarboxylated blood back into the abdominal aorta (Fagnoul et al. 2014). This re-establishes vital organ perfusion in patients with successful cannula placement. Even though return of spontaneous circulation occurs in several patients after extracorporeal (and by that, coronary) blood flow has been initiated, the cause of cardiac arrest is not reversed by eCPR. Therefore, this technique must always be combined with a diagnostic work-up to identify, and interventions to treat, the underlying pathology causing cardiac arrest. Current data suggest that eCPR is associated with good functional outcome in up to 30-40% of patients with cardiac arrest, especially when used in the in-hospital setting (Fagnoul 2014). A metaanalysis of nine studies including 3,098 cardiac arrest victims reported that the use of extracorporeal life support during cardiopulmonary resuscitation increased 30-day survival by 13% (absolute increase; CI 95% 6-20%, p<0.001, number needed to treat 7.7) and favourable neurological outcome by 14% (absolute increase, CI 95% 7-20%, p<0.0001, number needed to treat 7.1) compared to standard advanced cardiac life support (Ouweneel et al. 2016).

In view of the fact that eCPR is highly invasive, resource-intensive and expensive, it should only be implemented in a carefully selected patient population. As only limited data are currently available, the question of which subgroup of patients is most likely to benefit from eCPR remains controversial. Pragmatically, four criteria must be fulfilled (Table 1). 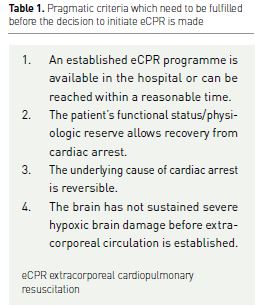 As in other acute conditions, functional status before the critical illness delicately impacts outcome. Although a recent metaanalysis did not report age as an independent predictor of outcome from cardiac arrest managed with eCPR (Debaty et al. 2017), most ongoing trials have upper age limits as one of their inclusion criteria (Table 2). No comparisons of mortality have so far been made between children and adults undergoing eCPR. However, observational data suggest that the chances of good functional recovery are higher in children than adults (Wolf 2012). 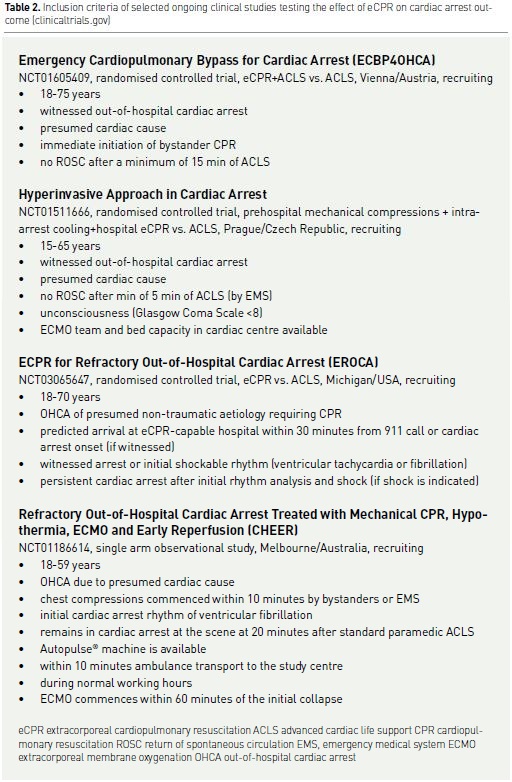 Reversibility of the underlying cause of cardiac arrest is another prerequisite to initiate eCPR. Only in a few instances, such as in the in-hospital setting, has the underlying cause of cardiac arrest clearly been identified before eCPR is initiated. Therefore, reversibility has often been equated with the presence of a shockable rhythm (ventricular fibrillation or flutter, pulseless ventricular tachycardia). Intra-arrest echocardiography may be a valuable tool to identify patients with a potentially reversible cause of cardiac arrest who present with non-shockable rhythms (e.g. patients with pulmonary embolism). In the out-of-hospital setting, two further cardiac arrest circumstances have been considered potential indications for eCPR. Accidental hypothermia has traditionally been a condition for which eCPR has been used for over three decades (Ruttmann et al. 2007). Similarly, case reports and smaller observational studies suggest that eCPR could be beneficial for patients with severe poisoning, particularly with sedative and/or cardiotoxic drugs (Reynolds and Judge 2015).

Another essential criterion to be met is the absence of severe hypoxic brain damage before extracorporeal blood flow is established. Extrapolation of data from general cardiac arrest populations in both children and adults suggests that only patients whose collapse has been observed and in whom chest compressions have been initiated within 10 minutes of the onset of cardiac arrest should be considered for eCPR. In addition, an increasingly solid amount of evidence indicates that good functional recovery becomes more likely if the time from collapse to start of extracorporeal blood flow does not exceed 60 minutes. While in patients experiencing in-hospital cardiac arrest this time limit can often be achieved, it requires a particularly tight and well-implemented protocol to install eCPR in patients who experience cardiac arrest in the out-of-hospital setting. Several strategies have been adopted in this patient population. Selected centres, for example, provide eCPR in the out-of-hospital setting and have reported reasonable outcomes (Lamhaut et al. 2017). Most centres, however, initiate eCPR in those patients only after admission to the emergency department. Further to careful patient selection, this approach relies even more on a straightforward selection and decision process on scene and a clear protocol in the receiving emergency department (Spangenberg et al. 2016). Patients who exhibit signs of life during cardiopulmonary resuscitation (e.g. spontaneous movements, gasping or breathing, CPR-induced consciousness) or experience repeated cardiac arrest episodes might be considered for eCPR even after prolonged periods of cardiopulmonary resuscitation.

The latest European Resuscitation Council guidelines suggest that eCPR be consid- ered as a rescue therapy for those patients in whom advanced cardiac life support measures are unsuccessful and/or to facilitate specific interventions such as coronary angiography and percutaneous coronary intervention or pulmonary thrombectomy for massive pulmonary embolism. The Council further underlines the urgent need for randomised controlled trials of eCPR and large eCPR registries (Soar et al. 2015). Several studies are currently enrolling patients to test whether implementation of eCPR in patients with cardiac arrest can improve outcome compared to conventional advanced cardiac life support. Inclusion criteria of selected ongoing clinical studies are displayed in Table 2.

eCPR represents an experimental but potentially interesting technique to improve survival from acute cardiac arrest. Pragmatic criteria (availability of an eCPR programme, preserved functional reserve before cardiac arrest, reversible underlying cause, and alleged absence of severe hypoxic brain injury before establishment of extracorporeal circulation) should be met before eCPR is used. The results of ongoing and future trials need to be awaited to clarify the outcome effects of eCPR and specifically define the appropriate patient population for this invasive intervention.

Jeremy Kahn is Professor of Critical Care, Medicine and Health Policy in the University of Pittsburgh School of Medicine and... Read more

How to Run Successful Rounds in the Intensive Care Unit