This article reviews the current evidence on prognostication after cardiac arrest.

The four key components of Post-Cardiac Arrest Syndrome were identified as:

Despite advances in post-resuscitation care management, about 50% of resuscitated patients from CA die or have a poor neurological prognosis. One of the major causes of mortality following CA is severe neurological damage due to post-anoxic brain injury (Sandroni and Nolan et al. 2015;). It is therefore essential to have a prognostication model that can predict poor neurological outcome and enable physicians to consider early withdrawal of life supporting treatment.

The Quality Standards Subcommittee of the American Academy of Neurology published a review in 2006 on prediction of neurological outcome in the comatose patient following CA (Wijdicks et al. 2006). However, the patients included in this review did not undergo TH or TTM, which was recommended subsequently. In 2015, ERC-ESICM recommended a multimodal prognostication approach for comatose survivors following CA (Sandroni et al. 2014).

• early communication with the family

It is essential that rapport and a good relationship is established with the next of kin or family members at the earliest opportunity. There should be attempts to provide meaningful information and for them to be made aware of the critical nature of the patient’s medical condition. This will also aid physicians to understand the expectations and goals of family members or patients. There should be regular interaction and it is vital for the family to understand that physicians will make the decision.

The current evidence supports the practice of first assessment after 72 or 24 hours, depending on whether patients received or did not receive temperature control management, respectively. This will help guide further management, and further prognostication can be carried out 24-48 hours later. However, the phenomenon of ‘late awakening’ has been described; there is a small subset of patients who will defy the 5-7 day recovery period and may wake up late and will have full neurological recovery. This is where the experience of the treating physician comes into action.

The modalities for evaluation were described in the 2013 review (Sandroni et al. 2013) and are as follows:

IV. Brain imaging (computed tomography (CT), magnetic resonance imaging (MRI)). It will be even more effective if this is performed by an intensivist alongside a neurologist.

This attribute is key and it is important to have a process. The process involves looking at all the previously described pre-, peri- and post-arrest factors, and continuous delivery of timely optimal care. It is therefore vital to be patient and to follow this process over a period of a week, even if there is no obvious visual recovery in the patient.

In 2014, an advisory statement on prognostication in comatose survivors following CA was published by the ERC and the ESICM (Sandroni et al. 2014). This statement updated and summarised the available evidence on this topic including that of TH-treated patients. The robust analysis of evidence provided practical recommendations on the most reliable prognostication strategies, and formed the basis of the ERC guidelines on resuscitation published in 2015.

The key recommendations are summarised below:

• Using the bilateral pupillary and corneal reflexes at 72 h or more from ROSC to predict poor outcome in comatose survivors from cardiac arrest, either TH or non-TH treated patients;

• Prolonging observation of clinical signs beyond 72 h when interference from residual sedation or paralysis is suspected, so that the possibility of obtaining false positive results is minimised;

• Not to use absent or extensor motor response to pain (M ≤ 2) alone to predict poor outcome as it has a high false-positive rate; it should be used in combination with other robust predictors.

• Using the term status myoclonus to indicate a continuous and generalised myoclonus persisting > 30 mins in comatose survivors of CA;

• Using the presence of a status myoclonus within 48 h from ROSC in combination with other predictors to predict poor outcome in comatose survivors of CA, either TH or non-TH treated;

• Evaluate patients with post-arrest status myoclonus off sedation whenever possible.

• There was suggestion to use SSEP at ≥ 24 h from ROSC to predict outcome in comatose survivors following CA not treated with controlled temperature.

• Absence of EEG reactivity to external stimuli, presence of burst suppression or status epilepticus at ≥ 72 h after ROSC to predict poor outcome in comatose survivors from CA;

• They should be used in combination along with other predictors as this criteria lacks standardisation and does not have very strong evidence.

There is suggestion to use high NSE at 48-72 h from ROSC in combination with other predictors for prognosticating a poor neurological outcome in comatose survivors following CA, either TH or non-TH treated. However, no threshold enabling prediction with zero false-postive results can be recommended. Utmost care and preferably multiple sampling should be employed to avoid false positive results due to haemolysis.

Using the presence of a marked reduction in grey matter/white matter ratio or sulcal effacement on brain CT within 24 hours after ROSC or presence of the extensive reduction in diffusion on brain MRI at 2-5 days after ROSC to predict a poor outcome in comatose survivors following CA both TH or non-TH treated. The brain CT or MRI should be used in combination with other predictors and only at centres where specific experience is available. 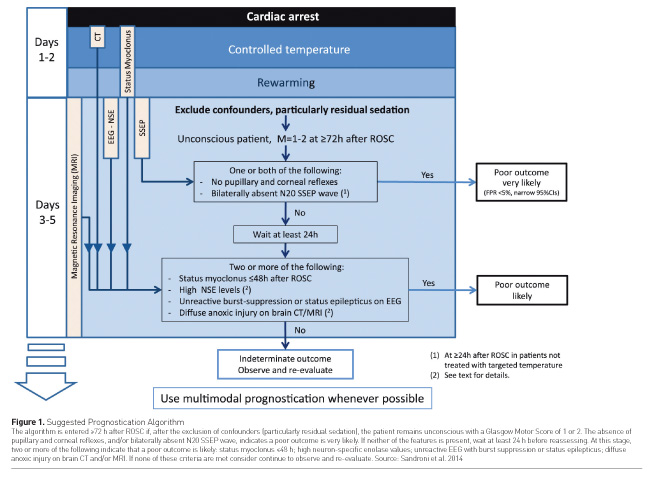 Hypothermia in neurocritical care patients other than cardiac arrest

Hypothermia (HT) is a cornerstone of neuroprotective strategies and has been used in critical care for acutely brain injured... Read more

When paramedics used a new, more flexible laryngeal breathing tube to give oxygen to patients who had had an out-of-hospital... Read more

O ne of the major problems for hospitals fighting the COVID-19 pandemic has been the lack of emergency ventilation devices.... Read more

Inspired by the Difficult Airway Society Guidelines and the Vortex Cognitive Tool One of the main recommendations of the 4th... Read more