Patient-ventilator asynchrony occurs when there is a mismatch between the patient’s inspiratory time and the mechanical breath (phase asynchrony) or when the flow provided by the ventilator is inadequate (flow asynchrony). It is a common occurrence, with up to one quarter of mechanically ventilated patients showing a high incidence of phase asynchrony (Thille et al. 2006). Suboptimal interaction between patient and ventilator can have wide-ranging physical and psychological effects, including dyspnoea and air hunger, discomfort, anxiety, and lung injury. These effects on the patient may often go undetected by healthcare staff, with nurses and physicians underestimating the feeling of breathlessness and impaired respiratory function as reported by the patients during a spontaneous breathing trial (Haugdahl et al. 2015).

Asynchronies may have a significant effect on patient outcomes, including a longer duration of mechanical ventilation and a higher rate of tracheostomy (Thille et al. 2006). De Wit and colleagues (2009) found a higher ineffective triggering index to be associated with a longer duration of mechanical ventilation as well as a longer hospital stay, while Blanch and colleagues (2015) found that an asynchrony index of greater than 10% was associated with increased ICU and hospital mortality. Their study analysed asynchronies, including ineffective inspiratory efforts, premature cycling and delayed cycling, in 50 patients monitored for a total of over 8 million breaths, which represented a median of almost 83% of the total time each patient received mechanical ventilation. The data showed that asynchronies were not only always present (Fig. 1), but also unpredictable. The asynchrony index for four patients rose and fell with no recognisable pattern over periods of at least 100 hours (Fig. 2). Avoiding asynchronies is therefore a difficult task, as it is not possible to predict when they will occur and when the settings might need to be changed accordingly.

The role of assistance levels and sedation

The level of pressure support is an important factor that may affect certain patient-ventilator asynchronies. A higher level of pressure support has been associated with ineffective inspiratory efforts (Thille et al. 2006) and an increase in the level of assistance appears to intensify the problem of cycling delays significantly during pressure-support ventilation (Spahija et al. 2010). Brochard and colleagues (2007) also found that ineffective inspiratory efforts during pressure-support ventilation may increase due to a high level of pressure support, as well as auto PEEP, inadequate triggering and delayed cycling. However, over-assistance is also associated with less dyspnoea and thus greater patient comfort. Under-assistance, conversely, is associated with more dyspnoea but fewer ineffective inspiratory efforts (Schmidt et al. 2013).

Several studies have examined the role of sedation with respect to patient-ventilator synchrony. Deeper sedation is associated with a greater incidence of ineffective inspiratory efforts (de Wit et al. 2009; Vaschetto et al. 2014), while the absence of sedation has been linked with improved outcomes in terms of the number of days without mechanical ventilation and the length of ICU and hospital stay (Strom et al. 2010). De Haro and colleagues are currently investigating the relationship between the asynchrony index and sedation, opioids and neuromuscular blockers.

The easiest way to recognise asynchronies at the bedside is to observe the patient and see if their inspiratory effort matches the mechanical breath. However, clinical observation is limited to severe asynchronies with a long enough delay between the patient’s effort and the mechanical breath (e.g., > 300 ms). In obese patients, it may be necessary to touch the respiratory muscle to feel when the effort starts. The clinician can certainly ask the patient simple questions about their breathing, especially if they are on noninvasive ventilation (NIV), however considering the unpredictability of asynchronies it is not feasible to monitor them constantly in this way.

More precise assessment of synchronisation at the bedside relies on the interpretation of ventilator waveforms. Pressure and flow waveforms display the interactions between the mechanical breath and the respiratory mechanics and patient’s effort, and studies have shown them to be an extremely useful tool for identifying asynchronies (Georgopolous et al. 2006; Mojoli et al. 2016). On the waveforms, the beginning of the patient’s inspiration can easily be detected as a sudden negative deflection in pressure tracing, and/or a sudden positive deflection of flow. However, it may be somewhat more difficult to see when the patient effort finishes and how much effort the patient is making.

The question of whether the ventilator is switching from inspiration to expiration at the right time can usually be answered by looking at the waveforms, in particular the flow (Mojoli et al. 2016). For example, when the ventilator is late in opening the expiratory valve, a sudden change from a fast to a slow decrease in the inspiratory flow marks the end of the patient’s inspiration and the beginning of a secondary phase of passive inflation.

The waveforms contain all the necessary information, however interpreting them is not always that simple. In a study carried out by Ramirez et al. (2017), only a very small number of healthcare professionals were able to recognise three simple asynchronies. Regardless of whether nurse or physician, or the years of experience in the ICU, it was shown that the only factor influencing the ability to interpret waveforms is training. Those staff members who had undergone relevant training were able to read the graphical representations correctly.

The patient effort signal can be measured using oesophageal pressure, which is currently the gold standard. The start of the effort is easily identified by the negative swing in oesophageal pressure, and it is also possible to see how deep the effort is. The end of the effort occurs during the relaxation phase when the oesophageal pressure increases to baseline. If oesophageal pressure measurement is not available, we can also assess the inspiratory effort via an electromyography of the diaphragm using an oesophageal catheter or surface electrode. While this method may be more accurate than waveforms for certain asynchronies, it can be noisy and difficult for clinical use in practice and may thus be better suited for research purposes. Furthermore, waveform analysis remains the best method of recognising ineffective triggering.

The table below shows different types of asynchronies, how they can be recognised by patient observation and how they appear on the waveforms. 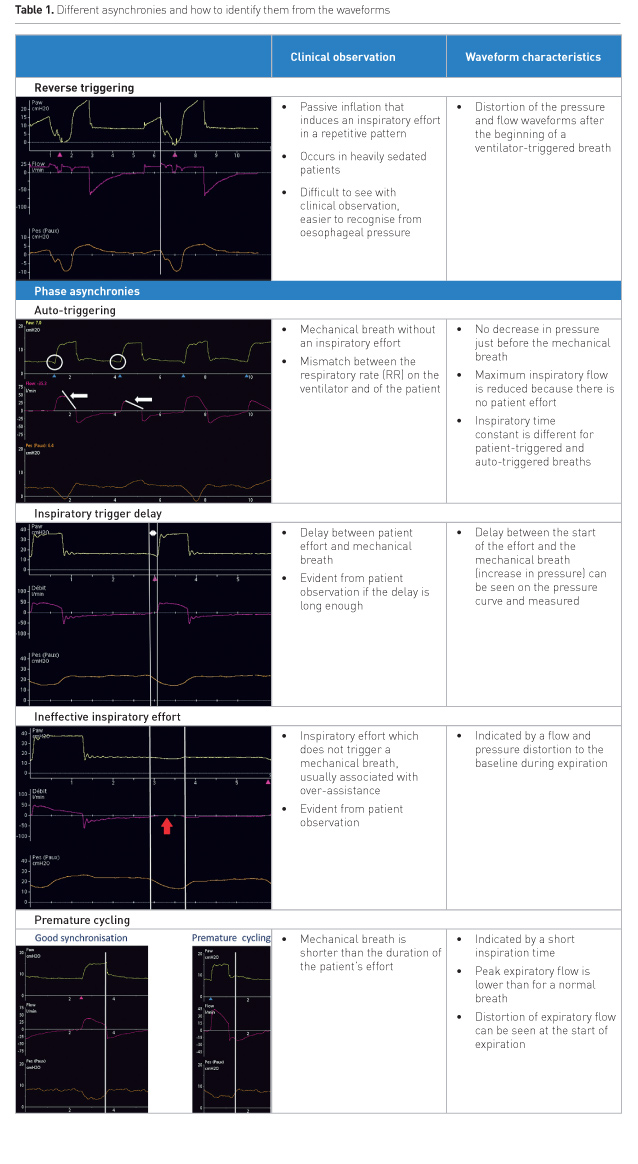 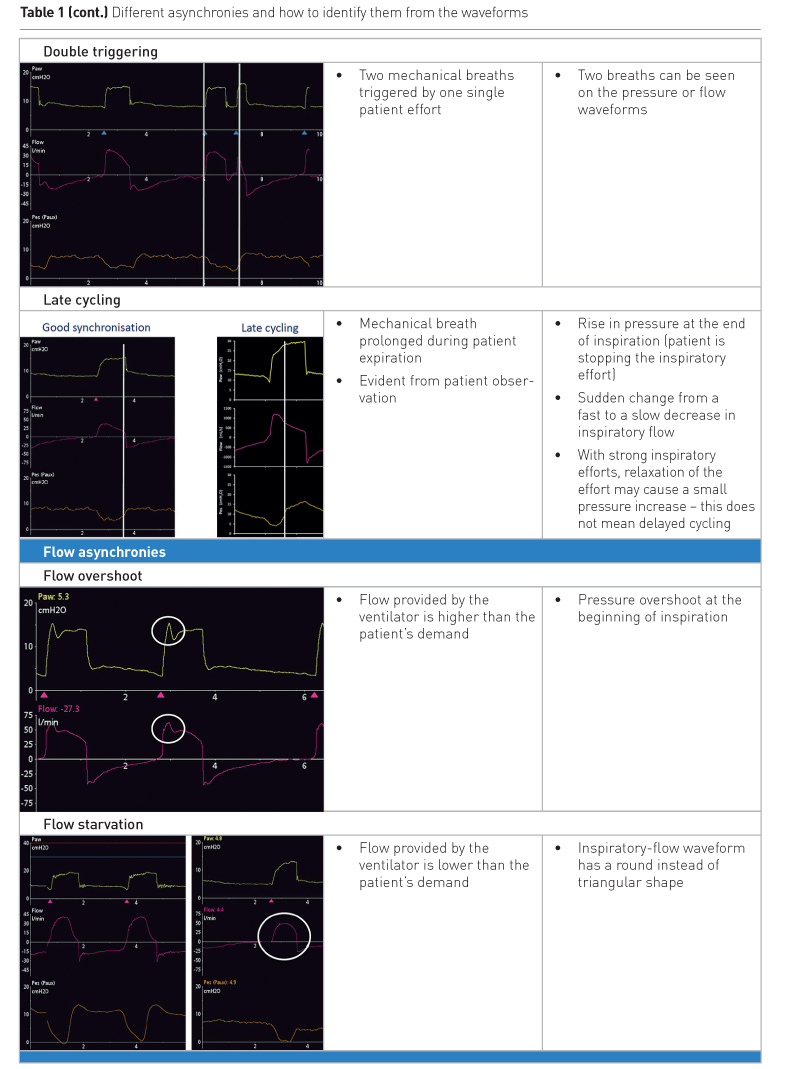 In some cases, multiple types of asynchronies may be interdependent. Inspiratory trigger delays, for example, usually cause late cycling—the breath starts later than it should and therefore also ends later. This gives rise to a vicious circle, whereby delayed cycling promotes dynamic hyperinflation and worsens intrinsic PEEP, inducing inspiratory trigger delay and leading to an increase in the number of ineffective inspiratory efforts and a greater workload for the respiratory muscle (Gentile et al. 2011).

Managing the most common asynchronies

These cycling delays and ineffective inspiratory efforts are two of the most common forms of asynchrony. In patients undergoing prolonged pressure-support ventilation, cycling was found to be delayed in more than 50% of the patients’ breaths (Mojoli et al. 2014). When at the bedside, clinicians can rectify the problem of cycling delays by adjusting the expiratory trigger sensitivity according to what they see on the ventilator screen. Alternatively, they can set the ventilator to open the expiratory valve as soon as a sudden change from fast to slow is detected in the decrease of the inspiratory flow. However, this requires the clinician to be at the bedside to identify the delay and change the settings.

What is needed to optimise synchronisation?

Improving patient-ventilator synchrony not only requires the clinicians to be trained in recognising the asynchronies, but also to be able to adjust the settings whenever asynchronies occur. Due to the unpredictable nature of asynchronies, the fixed trigger settings that were selected for a patient in the morning may no longer be suitable a few hours later. Optimising synchronisation would therefore require constant monitoring, which is not possible in practice. The solution would appear to lie in some form of continuous waveform reader integrated into the ventilator, which is able to replicate the capability of the clinician’s eye and brain. Based on the waveforms, the trigger settings could then be adjusted automatically to prevent the occurrence of asynchronies.

A new technology-based solution (IntelliSync+, Hamilton Medical AG) has therefore been developed to improve synchronisation, where both triggering and cycling-off are guided by automatic waveform analysis. As soon as a positive deflection of flow is detected, the ventilator opens the inspiratory valve and provides pressure support. While the highest sensitivity of conventional flow triggers is 0.5 l/min, this automatic analysis of real-time waveforms can detect an inspiratory effort even if the flow is still negative. This new technology continuously analyses waveform shapes to enable immediate detection of signals of patient effort or relaxation, and real-time initiation of inspiration and expiration. The clinician can decide whether to automate either the inspiratory trigger or cycling-off, or both.

Figures 3a and 3b show simulated patient data comparing default trigger settings with IntelliSync+ for the same patient.

A pilot study compared the new technology for automatic waveform-guided optimisation with standard cycling-off at both the default expiratory trigger sensitivity (ETS) setting (25% of peak inspiratory flow) and a manually optimised setting guided by an analysis of waveforms (Mojoli et al. 2016). The comparison was made for two different levels of pressure support. Compared to the default ETS setting, the optimised ETS setting resulted in a reduction in cycling delays and ineffective efforts at the base level of pressure support. However, the investigators found that this same optimised ETS setting was no longer beneficial at the higher pressure-support level (base level + 50%). With the increase in pressure support, patient-ventilation interaction worsened and repeated optimisation was required. This second optimisation led to a decrease in cycling and trigger delays, but did not affect the ineffective inspiratory efforts. Automatic optimisation of triggers using IntelliSync+ resulted in a significant decrease in cycling delays when compared to the manually optimised settings, with values of less than 100 ms at both pressure levels. The investigators found a similar reduction in ineffective efforts and trigger delays for manually and automatically optimised settings.

These results show that settings at one level of pressure support are no longer suitable at a higher level of support, and correspond with the findings of earlier studies that high pressure support significantly increases cycling delays and may lead to less inspiratory effort and therefore an inability to trigger. Each increase in pressure support requires an adjustment to trigger sensitivity to ensure patient-ventilator interaction does not worsen. Furthermore, even manual optimisation of fixed trigger settings may be insufficient, as this is based on an average of several breaths, whereas the automatic optimisation is performed on a breath-by-breath basis.

Automatic optimisation of trigger settings based on waveforms may therefore be a promising noninvasive tool for a new generation of pressure-support ventilation. The analysis of waveforms by the expert eye is a reliable way of detecting asynchronies, however the unpredictable nature of asynchronies would mean continuous monitoring is required. Preliminary evidence shows that automatic, waveform-guided optimisation performs just as well as, if not better than manual optimisation, and improves patient-ventilator interaction without the need for 24-hour surveillance.

Right when it matters. Right where it counts.  Simplify assessments and deliver effective care with Venue Go. Featuring a uniquely adaptable design that goes from cart to table to wall, Venue Go supports Point of Care medicine across clinical...