ICU patients receive several drugs simultaneously, being prescribed drug regimes that include many chemicals from different classes. Almost all drugs commonly prescribed in the ICU have been reported as potential triggers for anaphylaxis (Table 1) (Ozcan et al. 2016).

Is the frequency with which each drug or drug class induces hypersensitivity reactions in the ICU known?
Immediate-type hypersensitivity to drugs is an issue of concern for ICU physicians even though most reports address intra-anaesthetic anaphylaxis retrospectively. In a UK-wide survey approximately 76% of anaesthetists had attended a case of perioperative anaphylaxis and 4% had encountered a lethal event, (Kemp et al. 2017). There are several published guidelines regarding intraoperative anaphylaxis, but further investigation and referral to national registries is inconsistent (Kemp et al. 2017). The reported OR incidence varies widely from 1:1.556 (Kemp et al. 2017) to 1:10-20.000 (Mertes et al. 2009; Gibbs et al. 2013). Antibiotics in the U.S. and neuromuscular blocking agents in Europe seem to be the leading drug class responsible for immediate type hypersensitivity (b).
Many anaesthetists across Europe work simultaneously in the OR and ICU, thus transfer of knowledge is to be expected.
Do epidemiological data regarding incidence and frequency distribution vary considerably in the ICU?
Epidemiology and reaction patterns differ in accordance with consumption trends (Fernandez et al. 2017).

A history of drug allergies needs to be documented in each hospitalised patient. Approximately 10-25% of patients admitted to hospital declare that they have had an allergic reaction, especially to antibiotics and non-steroidal anti-inflammatory drugs (Torda and Chan).
For ICU patients, drug allergy labelling might be translated to avoidance of certain drugs, use of broader-spectrum antibiotics and thus, increased antimicrobial resistance thereafter, as well as higher costs. Antibiotic selection is important for critically ill patients who require antibiotics for their diseases, in a setting where drug-resistant infections are becoming more common. Inappropriate antimicrobial selection is an important issue for antibiotic stewardship in ICU departments. Effective antibiotic allergy management is essential for antibiotic stewardship programmes (Macy et al. 2017).
The majority of patients with self-reported drug allergies can be tested, and in most cases the results of the tests are negative and patients can safely receive the drugs. More than 95% of patients who report penicillin allergy tolerate beta-lactams (Blumenthal et al. 2017). The gold standard for de-labelling patients is to perform skin tests, followed by drug challenge tests if the skin tests are negative. Antibiotic allergy is often misdiagnosed and testing is infrequently performed in the hospital setting, even though feasible (Chen et al. 2017). In the ICU the pool of healthcare providers who can perform antibiotic skin testing might need to be expanded (Rimawi et al. 2014). It has also been suggested that in ICU patients with confirmed hypersensitivity, de-sensitisation protocols can be used to achieve acute tolerance, (Macy et al. 2017; Blumenthal et al. 2017).
Do we know the clinical impact of applying these algorithms in patients with haemodynamic instability? Are patients with ileus suitable to undergo oral de-sensitisation regimes? Do we know the efficacy of desensitisation regimes to achieve acute tolerance in this patient population?
The diagnosis of immediate-type hypersensitivity reactions may be difficult both during the acute event, when early and aggressive treatment is required, and after the acute phase reaction, when identification of the culprit drug is required to prevent further exposure.
Why could immediate-type hypersensitivity reactions not be recognised and/or under-reported in critically ill patients?

Diagnostic difficulties for the acute event in the ICU

Establishing the diagnosis of acute immediate-type hypersensitivity is hampered by the complexity of organ dysfunction/insufficiency encountered in the ICU population and the multitude of drugs that are simultaneously administered. Clinical judgement is essential for the interpretation of acute clinical status deterioration superimposed on serious underlying pathology. Hypersensitivity reactions may be severe and manifestations may be similar to other disease states more commonly encountered in the ICU. The most frequent manifestations of drug hypersensitivity are cutaneous, cardiovascular and pulmonary. Due to vasodilator cytokines acute release, the most common anaphylaxis may present as distributive shock, similar to septic shock. Anaphylaxis might also be a cause for coronary artery vasospasm.
Is the clinical profile of drug hypersensitivity reactions occurring in the critically ill similar to those in non-ICU patients? Could the clinical profile be blunted in patients with immune suppression due to underlying disease and possibly, medication (steroids, antihistamines)?

Retrospective diagnosis of drug-induced immediate-type hypersensitivity is complex, and systematic studies in the critically ill population are lacking. In vivo and in vitro tests can only be performed 4 to 6 weeks after the acute event, as each hypersensitivity manifestation leads to mediators’ consumption, including histamine, leukotrienes, tryptase and others. In this timeframe, results may be false-negative, and thus patients in the ICU are unable to be tested even though they might require the drugs which are suspected to have caused the reaction.
Identification of the patients at risk is most important. The history of drug-induced hypersensitivity reactions has to be documented and the clinical manifestations have to be analysed, as some manifestations are not true hypersensitivity.
Identification of the culprit agent is hampered by the lack of diagnostic studies with optimal sensitivity and specificity (Table 2). 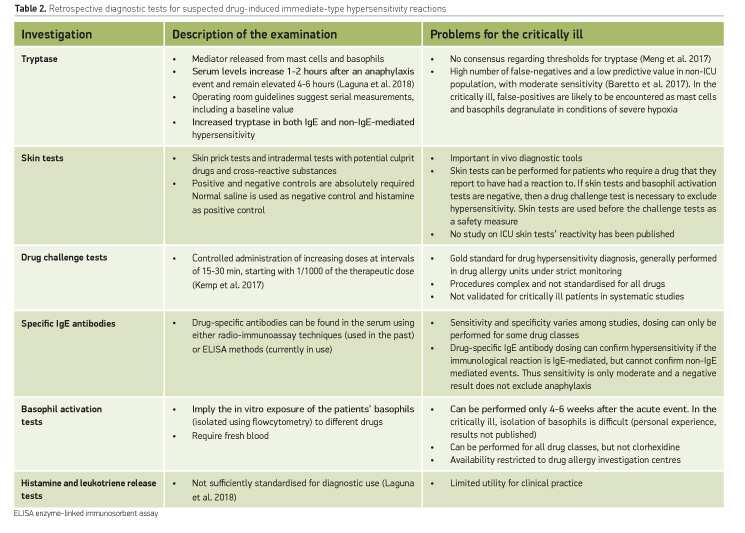 Are these diagnostic studies validated for the critically ill patients?
Retrospective diagnosis algorithms are still not harmonised across Europe and vary considerably, especially if the patient has access or not to a drug allergy investigation centre. Moreover, the performance of each retrospective diagnostic test is not perfect and sensitivities are only moderate, as shown in non-ICU patients. How could all these diagnostic possibilities be applied and interpreted in the critically ill? Systematic studies are lacking.

We have many questions and few answers regarding drug hypersensitivity in the ICU. Are systematic studies necessary? Definitely, yes. The true incidence of anaphylaxis in the ICU is difficult to estimate. The incidence of immediate-type hypersensitivity reactions to drugs has not been reported in the ICU population, even though in this setting, patients receive concomitantly many potential triggers for anaphylaxis. It is possible that these reactions are underreported due to difficulties in establishing the diagnosis and drawbacks in performing diagnostic studies. The impact on patients’ outcome, morbidity, mortality, and healthcare-associated costs are as yet unknown.
In the future, raising awareness regarding immediate-type hypersensitivity reactions might be reflected in epidemiological studies and might improve knowledge regarding these (possibly) not so rare adverse drug reactions in the critically ill.
Each department needs to have guidelines for acute immediate-type hypersensitivity reactions (recognition and management) and for the retrospective investigation of previous reactions. Immediate access to guidelines for anaphylaxis treatment and established referral pathways for investigation are required to confer optimum care in the ICU, and to ensure departmental preparedness to manage such patients.

Caring for very old patients in the ICU

Describes the epidemiology and outcomes for very old patients as known in 2018, along with a short introduction to the... Read more

A new paper reports an approach to growing tracheas by coaxing cells to form three distinct tissue types after assembling them... Read more

Liver support in the intensive care unit: mechanism of action and science

The idea of liver assist is extremely attractive for patients with liver failure, as the liver possesses huge capacity to regenerate.... Read more