Share
Download Article Back
In this article, I highlight that the most important thing intensive care physicians should stop doing is ignoring that they are prone to several cognitive biases. I will first support my statement by looking for conceptual caveats and cognitive bias in routine intensive care unit (ICU) care, and then move to specific patient and structural problems.
Intensive care is an interesting specialty. From all the early excitement in the 1970s, passing through two decades of intensive physiological use at the bedside, intensive care landed on the rough ground of modern randomised controlled trials (RCTs) in the late 1990s and early 2000s. The increasing number of critically ill patients coupled with new monitoring devices and important funding both from governmental and private agencies (including pharmaceutical companies) fostered research. In the early 2000s, the panorama looked promising, with positive trials coming out on a frenetic basis (Bernard 2001; Rivers 2001). Regrettably, the initial enthusiasm was followed by a wave of negative results (Ranieri 2012; PRISM Investigators 2017). Many interventions that seemed promising in the early 2000s were sequentially disproved or proved to be harmful, which has been the basis for the rationale of limiting excesses of interventions and treatments in the critically ill, the so-called “doing less” (Singer 2006).

What are the conceptual caveats in routine ICU care we should stop doing?

This section could be summarised in one sentence: Obtain less (not more) data and reduce treatment exposure considering it part of the disease and not of the healing process. Do so because we are all prone to cognitive bias.
The first part of the sentence brings a concept that is well-known to experts in behavioural science: information overload (Bawden 2008). Excessive information is known to reduce accuracy and increase confidence in the decision-making process (Hall 2007). This association can have disastrous consequences for critically ill patients, worsening the performance of important acute decisions and making physicians less prone to notice their own mistakes.
As the heart might be responsible for generating its own afterload, intensivists are also partially responsible for generating their own information overload. Examples include excessive use of haemodynamic monitoring in otherwise stable patients, pleiads of routine laboratory and imaging tests and inputs from several colleagues and healthcare workers (Manor-Shulman 2008). In the eagerness of having a quick diagnosis and treatment, intensivists generate data that will only aggravate the problem. Coupled with the increasing difficulty in accessing patient´s data due to poorly designed electronic health records, this creates an intensivist that has both information overload and information anxiety; that is, an individual exposed to too much data and that has trouble trying to access it (even the parts that indeed matter!). This results in a nightmare that is well known by most of us. A vignette is shown in Figure 1. 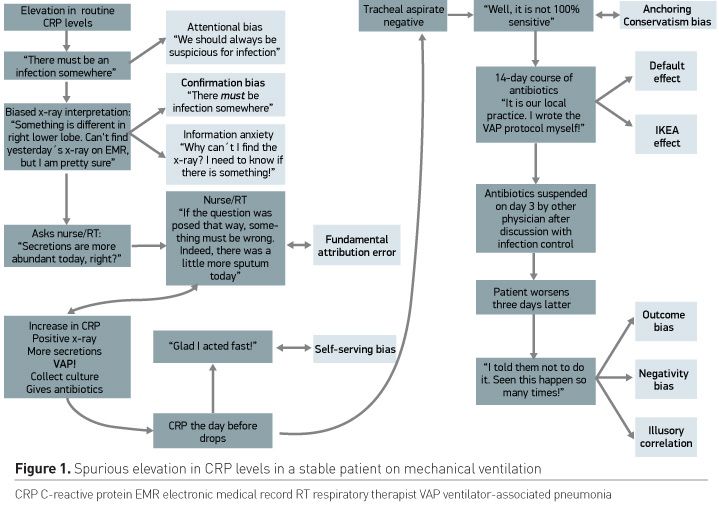 In the left part of this example, a series of types of cognitive bias occurred, triggered by a spurious elevation in C-reactive protein (CRP) levels that were routinely collected. Due to concerns of an untreated infection, the physician tries to find something that suits his/her keenness to explain the laboratory finding and somehow slack his fear of negligence. Secure physicians would probably ignore (or would not even have ordered) CRP levels and would choose a “wait-and-see” approach (Hranjec 2012). However, some physicians would embark on a destructive cycle of cognitive bias aiming at confirming their hypothesis. A similar scenario is conceivable for an apparently stable patient, who presents with an elevated lactate level, low central venous oxygen saturation etc. The problem, therefore, is the attempt to contextualise excessive information inside an otherwise unremarkable situation.
It may be stated that simply collecting less data is a childish suggestion and that all efforts should be made to use more data to improve treatment. I beg to disagree. A probabilistic interpretation of data is well suited in complex scenarios when we are accustomed to information (this applies to most Bayesian inference done in medicine); however, when data is new, time is short, and a decision is crucial, approaches that minimise choices based on less data may outperform complex models (Hardman 2003). This applies to many busy strained ICUs around the world.
Now let´s move to the right part of Figure 1. Damage has been done and our patient with a spurious irrelevant CRP elevation now has a ventilator-associated pneumonia (VAP) diagnosis. VAP has a doubtful attributable mortality but appears to be associated with prolonged mechanical ventilation and, obviously, higher costs (Melsen 2013). A VAP diagnosis leads to serious developments, such as antibiotic exposure, family distress (“Now, above all, he has a pneumonia!”) and even administrative issues (billing and benchmarking). Cognitive bias will not stop there. Despite evidence that guiding antibiotic time using CRP and/or procalcitonin levels are appropriate (de Jong 2016), the physician may now choose to embrace a conservative approach and apply a whole two-week course of antibiotics (the default effect). The same physician that relied on CRP to diagnose VAP is now shaky to stop antibiotics when CRP drops. However, if CRP dares to rise again in the following 48 hours, it is inevitable that concerns about “treatment failure” will arise and the circle of overtreatment will prevail. If physicians would consider that treatment is part of the disease and not an indissociable part of recovery, maybe the pros and cons would favour the first. In fact, using our infection vignette as an example, it is estimated that up to 20% of all patients receiving antibiotics will develop a serious adverse reaction (Tamma 2017). Maybe net benefit would be negative in our vignette?
The right side of the figure continues with a well-known sequence of cognitive biases that preclude proper patient management. The physician becomes emotionally tied to the diagnosis, knotted to the VAP protocol he wrote for the ICU (the “IKEA effect”, Norton 2012) and will fail to see evidence contrary to his hypothesis. If antibiotics are withdrawn in the next days by other physician and the patient eventually worsens, this will only further close the book on cognitive bias. While I used VAP for this example, the reader might find it suitable for many haemodynamic interventions (including the fluid bolus-diuretics conundrum, cardiac output measurements, etc).

Moving to the patient level

After the vignette, I hope that the reader considers that a more pragmatic approach to intensive care may be desirable. The cornerstone is transposing one of the Orwellian rules of writing to the ICU: “If it is possible to cut a word out, always cut it out” (Orwell 2013). Let´s replace “word” for “treatment” or “practice” and see what we can do. Examples are shown in Table 1. 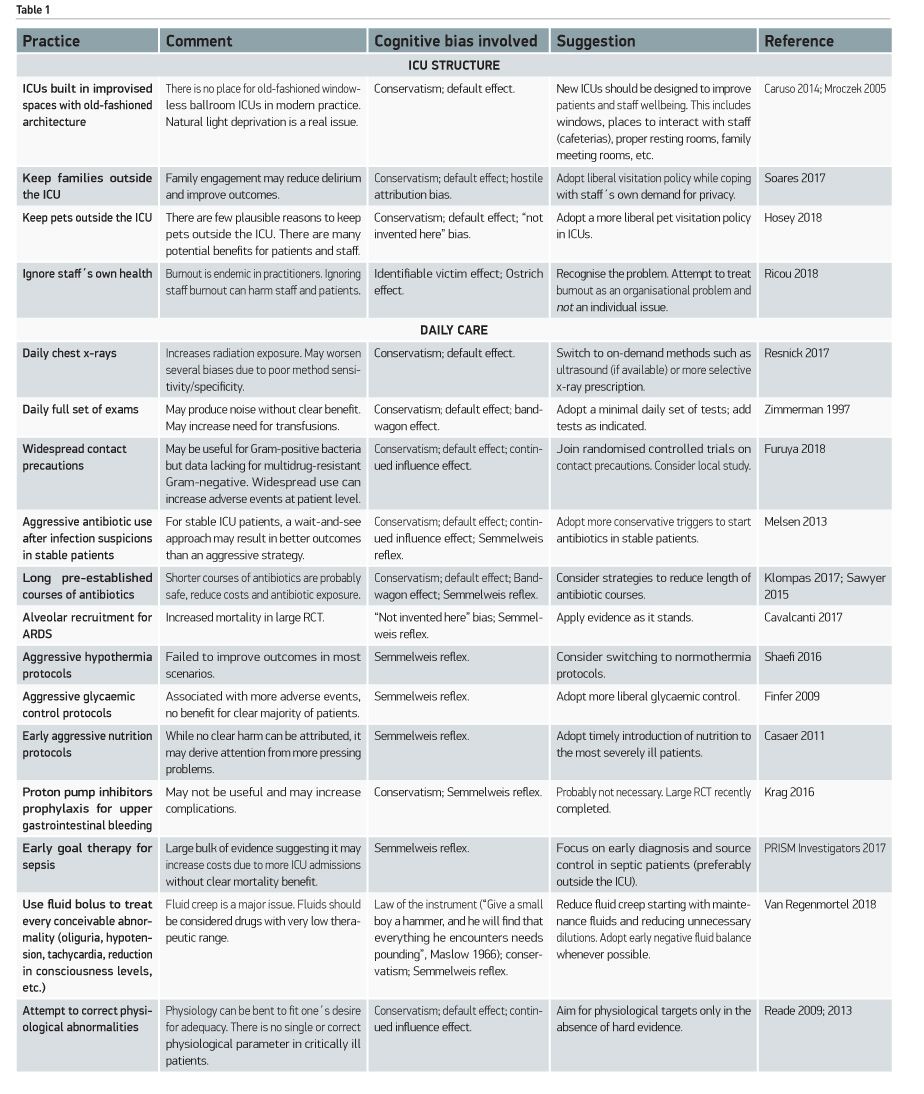 For each intervention, procedure and treatment shown in Table 1, one cognitive bias will have to be overthrown. This is not an easy process, since most of the teaching in medicine is indeed based on passing bias and abstract concepts from generation to generation. It is commonplace to hear that we should aim to keep a patient “normovolaemic”, “well-nourished”, etc., while it remains underappreciated that these terms are closer to a linguistic trick than to a medical practice. The first step to embrace a modern ICU is understanding that much of what we did and believed was part of habit and not science. This is the very reason why conservatism, Semmelweis reflex (Leary and Wilson 1991) and default effect are the most frequent cognitive bias shown in Table 1.
In the dawn of civilization in ancient Eridu, architects were more interested in rebuilding structures from scratch than preserving previous buildings. The Eridu fortress was rebuilt eleven times. As Paul Kriwaczek stated, ancient Eridu habitants were impatient with what was old and receptive to the new (Kriwaczek 2012). Intensive care should remember its roots but allow the new to be built upon its ground.

Interprofessional teamwork in the ICU

Panacea or illusion? Reflections on key research insights into interprofessional teamwork in the ICU with a critical yet optimistic... Read more

Our cover story this issue is Imaging. The radiology armamentarium is vast, with many imaging modalities available to aid... Read more

Recent advances and new challenges. It has been thought for years that cancer patients have not benefitted from intensive... Read more

Fluid management during shock from physiology to bedside. Shock is a common life-threatening, generalised form of acute... Read more

ICU, Intensivists, cognitive bias In this article, I highlight that the most important thing intensive care physicians should stop doing is ignoring that they are prone to several cognitive biases. I will first support my statement by looking for conceptual caveats and cognitive bias in r