Glycaemic control in critically ill patients: how tight should it be?

Those who favour liberal glycaemic control assert that hyperglycaemia is simply a beneficial adaptation in critically ill patients to provide fuel for vital organ systems. This view is supported by results from the NICE-SUGAR (Normoglycemia in Intensive Care Evaluation and Survival Using Glucose Algorithm Regulation) study which concluded that tight glycaemic control (TGC) led to moderate and severe hypoglycaemia and an increased risk of death.4

The other view is that hyperglycaemia, in the context of early nutrition, is maladaptive and harmful. Glucose overload in cells that do not need insulin for glucose uptake may cause mitochondrial damage and, while hypoglycaemia is a risk, it can be prevented.

To explore the relationship between blood glucose levels and prognosis, we carried out two studies, using an identical design, on patients entering either the adult surgical ICU (S-ICU) or adult medical ICU (M-ICU).5,6 In both studies, patients were randomly assigned to receive intensive insulin therapy (IIT: target maintenance level 80 to 100mg/dL) or conventional treatment (insulin only when blood glucose was between 180 and 215mg/dL and stopped again when falling below 180mg/dL). IV glucose was given on admission, followed on day 2 by early standardised parenteral (PN) combined with enteral nutrition (EN).

Pooling the results for the 2748 patients, IIT was associated with a clear reduction in hospital mortality of 4% (p=0.02) in the total population and 8% (p=0.006) among those patients who were in the ICU for at least 3 days.7

Further studies found that hyperglycaemia brought about cellular glucose overload in the kidney, which was associated with mitochondrial dysfunction and renal injury. Histological examination showed clear flattening of the tubules with loss of tubular epithelium and intraluminal debris or calcification in kidneys from the hyperglycaemia group.9 It was also found that hyperglycaemia induced cellular glucose overload in the liver and myocardium, causing mitochondrial dysfunction.10

In 7/9 human patients who had been treated conventionally there were enlarged mitochondria in liver samples with increased abnormal and irregular cristae. Only 1/11 patients given intensive insulin therapy displayed these abnormalities (p=0.005).11 The authors noted that the lack of effect on skeletal-muscle mitochondria suggested a direct effect of glucose toxicity rather than of insulinaemia.

Numerous mechanistic studies have confirmed that cells which are not dependent on insulin for glucose uptake can experience mitochondrial damage from hyperglycaemia in the context of critical illness. 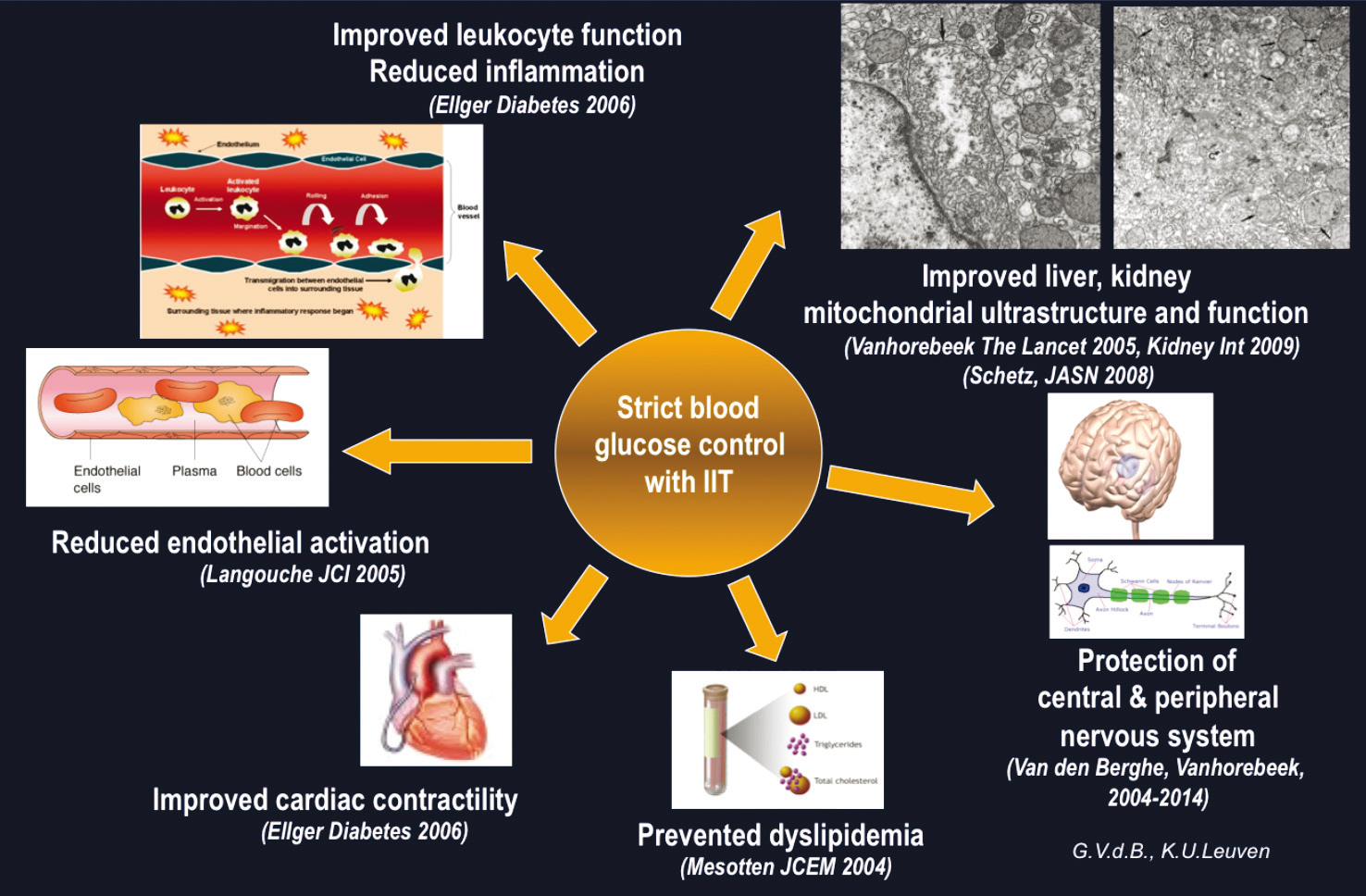 A post hoc analysis of the results from the S-ICU and M-ICU studies found a marked survival benefit of intermediate vs limited control, and a slight further improvement with tight control, while only tight control produced very marked benefits in terms of new kidney injury.5-7 With polyneuropathy, benefi t was only seen with the tightest control.

In children, it is critical to target relevant age-adjusted values; targeting adult fasting levels of glucose may be harmful or, at best, ineffective. Seven hundred critically ill infants and children who were admitted to the paediatric ICU (PICU) were randomly assigned to target blood glucose levels (2.8 to 4.4mmol/L for infants, 3.9 to 5.6mmol/L for children) with insulin infusion throughout PICU stay, or to a second group where insulin infusion was used only to prevent blood glucose exceeding 11.9mmol/L.12 BG was brought down to fasting levels in the intensive group and benefi ts of tight control were seen in multiple areas including shorter PICU stay (5.51 vs 6.15 days, p=0.017), lower C-reactive protein (9.75mg/L vs 8.97mg/L, p=0.007) and fewer infections (29.2% vs 36.8%, p=0.034). Hypoglycaemic episodes must be carefully managed to avoid rebound to high glucose levels. A comparison of children who had experienced hypoglycaemic episodes with those who had not, revealed no adverse effects on IQ, visual-motor integration or executive functions.

This contrasts with the findings of the NICE-SUGAR study which reported an increased risk of death in ICU patients who had experienced a hypoglycaemic episode.4 This was attributed not to any effect on organ function, rather to cardiovascular failure.

Several important differences between the studies need to be highlighted. First, different target levels were used, with the two study arms in the NICE- SUGAR study being much closer together. Compliance levels also differed: in the Leuven studies, 70% of patients in the intervention group achieved target levels compared to less than 50% in the NICE-SUGAR study.

Many of the glucometers allowed in the NICE-SUGAR study have since been found to be unsuitable for their purpose.13,14 Inaccuracies in measuring glucose can result in poor insulin titration and lead to large BG fluctuations and undiagnosed hypoglycaemia. Further errors could have been introduced through use of a too simple “if-then” algorithm that could be adapted or even set aside, unlike the computerised algorithm that has been developed at Leuven.15

Finally, in the NICE-SUGAR study, feeding was almost entirely via the enteral route whereas at Leuven, inadequate enteral feeding was supplemented with PN. It is possible that the NICE-SUGAR feeding protocol induced global substrate deficit through insulin-induced suppression of metabolism. On the other hand, PN in the Leuven studies may have increased the severity of stress-induced hyperglycaemia, with insulin infusion being required to counter the effect.

To investigate this, two RCTs were conducted to compare early vs late PN in critically ill adults (EPaNIC) and children (PEPaNIC).16,17 Both studies produced similar results, more pronounced in children, with patients experiencing more infections and a lower likelihood for live discharge with early PN. In a secondary analysis it was found that delayed recovery with early feeding was explained by the amount of proteins or amino acids consumed, rather than glucose.18 The likely mechanism is that amino acids suppress autophagy, a process which eliminates mitochondria that are damaged by hyperglycaemia.

Given these insights, our proposal is to re-do our original randomised controlled studies but under different conditions. In particular we will target fasting blood levels against hyperglycaemia up to 215mg/dL, and will not include early PN. This study, the “TGC-fast” study has received funding and is now in the process of being set up to recruit almost 10,000 patients.

How to provide better intensive care?

Interventions intended to support one organ can have unexpected implications on the patient, presenting physicians with critical... Read more

There is a renewed interest in novel extracorporeal technologies as a means of supporting individual organ failures. An emphasis... Read more

(2020-01-25 10:38)
HOW I GOT MY EX HUSBAND BACK WITH THE HELP OF REAL AND EFFECTIVE SPELL FROM DR Osasu My name is Olivia Jayden, I never thought I will smile again, My husband left me with two kids for one year, All effort to bring him back failed I thought I'm not going to see him again not until I met a lady called Jesse who told me about a spell caster called Dr. Osasu , She gave me his email address and mobile number and I contacted him and he assured me that within 48hours my husband will come back to me, In less than 48hours my husband came back started begging for forgiveness saying it is the devils work, so I'm still surprise till now about this miracle,i couldn't conceive but as soon as the spell was cast,i became pregnant and gave birth to my third child,if you need any assistance from him you can contact him via:email: [email protected] Or WhatsApp or call him now:
+2347064365391 . Dr.Osasu also cures: 1. HIV / AIDS 2. HERPES 1/2 3. CANCER 4. ALS (Lou Gehrig’s disease) 5. Hepatitis B