Extravascular lung water as a target for intensive care

The paper highlights the present clinical rationale for extravascular lung water measurement as a key to personalisation of haemodynamic therapy.

Importantly, EVLW can serve as a guide for personalisation of haemodynamic management. Thus, critical illness resulting in shock and tissue hypoperfusion refractory to fluid resuscitation can be considered as a target for monitoring of EVLW in combination with oxygen transport and metabolic parameters (Jozwiak et al. 2015; Monnet et al. 2018). Moreover, when integrated with treatment protocols, EVLW has a potential to improve clinical outcome (Monnet et al. 2018; Mitchell et al. 1992).

Methodologically, TPTD calculates cardiac output (CO) according to the Stewart–Hamilton principle, based on the analysis of thermodilution curve (Figure 1), by applying a thermal (cold saline) indicator. Primarily the TPTD monitor calculates intrathoracic thermal volume and pulmonary thermal volume by multiplying CO with the mean transit time and the down-slope time of the curve, respectively. Pulmonary thermal volume consists of pulmonary blood volume (PBV) and EVLW, representing the largest mixing volume for the indicator. The difference between intrathoracic and pulmonary thermal volumes is global end-diastolic volume (GEDV) (Sakka et al. 2000; Boussat et al. 2002). Thus, the combination of CO, EVLW, and GEDV can be a useful tool for clinical assessment of the volumetric status of the patient, especially in shock and ARDS. In addition, TPTD parameters can be used to calculate pulmonary vascular permeability index (PVPI = EVLW/PBV), in order to differentiate cardiogenic and non-cardiogenic types of PO (Jozwiak et al. 2015; Boussat et al. 2002; Kuzkov et al. 2006). The technique is suitable for application at the bedside and integrates pulse contour analysis for continuous CO monitoring and assessment of fluid responsiveness.

Since PO is a hallmark of ARDS, bedside assessment of EVLW has a great potential to optimise fluid therapy and respiratory support (Jozwiak et al. 2015; Michard 2018; Sakka et al. 2002; Jozwiak et al. 2013; Tagami et al. 2018). Both EVLW and PVPI increase in non-survivors of ARDS, peaking between days 2 and 4 of the lung injury (Sakka et al. 2002; Kuzkov et al. 2006; Sakka 2013; Martin et al. 2005). In ARDS, EVLW is increased in the overwhelming majority of patients (Kuzkov et al. 2006; Le Tourneau et al. 2012). Moreover, ARDS patients with a maximum EVLW > 21 mL/kg and PVPI >3.8 have a mortality rate of approximately 70% (Jozwiak et al. 2013). In contrast, diffuse alveolar damage, which is the ultimate pathologic pattern of ARDS, was confirmed in only 45% of the patients meeting the criteria of the Berlin definition (Thille et al. 2013). Thus, EVLWPBW > 10 mL/kg is an important threshold of PO and remains an important candidate to be integrated into the current definition of ARDS (Jozwiak et al. 2015; Michard et al. 2012). This is also consistent with Kushimoto et al. (2013) demonstrating that ARDS severity by the Berlin definition was associated with EVLW of 14.7, 16.2, and 20.0 mL/kg in mild, moderate, and severe forms, respectively, while PVPI followed the same pattern with values of 2.6, 2.7 and 3.5. 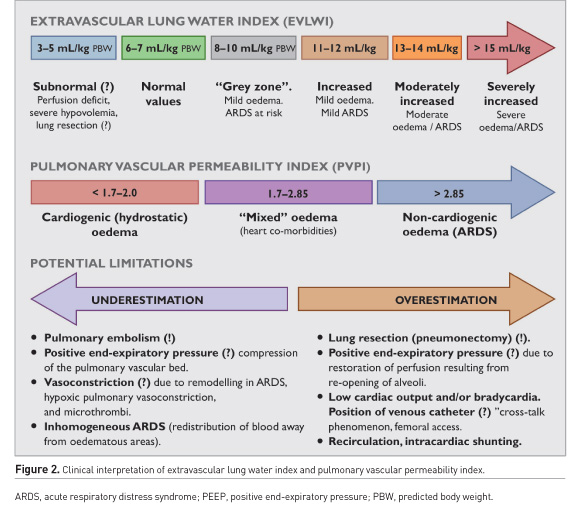 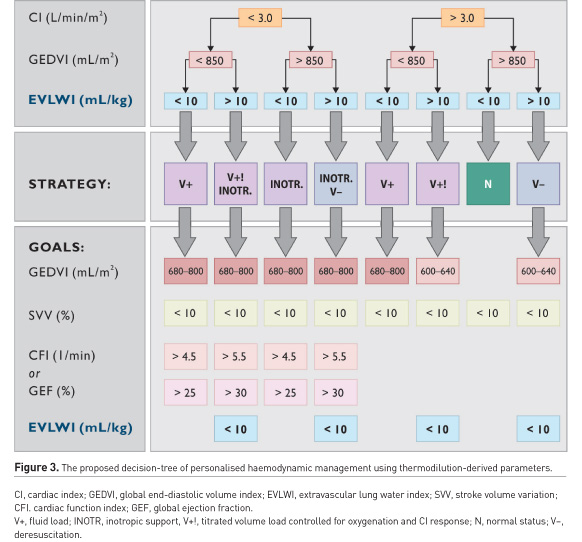 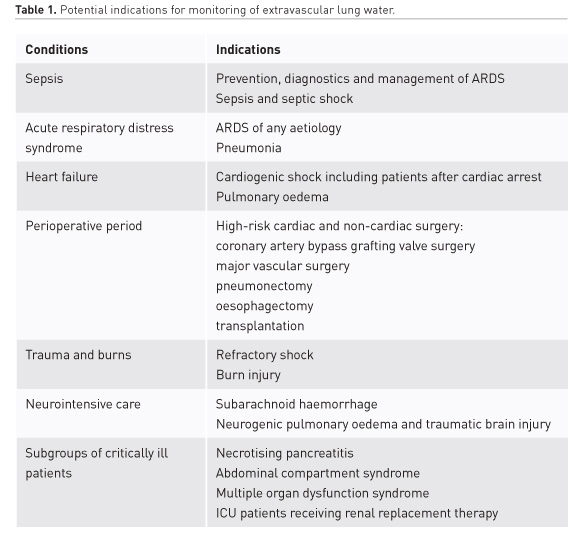 What is beyond ARDS and sepsis?

Pulmonary oedema with EVLW >7 mL/kg is not an uncommon finding after major vascular surgery and can be caused by increased permeability in the absence of overt heart failure. Thus, EVLW might help to distinguish between ischaemia-reperfusion lung injury, atelectasis and cardiogenic PO (Groeneveld et al. 2006).

In neurocritical care, EVLW assessment might be useful to avoid neurogenic PO (Brown et al. 2009). The evaluation of EVLW together with CO and volumetric parameters has been validated as an important tool in patients with subarachnoid haemorrhage (SAH) to prevent pulmonary complications and manage life-threatening cerebral vasospasm (Mutoh et al. 2007) Following SAH, EVLW might demonstrate a biphasic increase: a cardiogenic PO due to low cardiac contractility immediately after SAH, and most likely due to hypervolemia and systemic inflammatory response from day 7 of SAH (Obata et al. 2016). In traumatic brain injury, increased EVLW might be associated with trauma severity and increased intracranial pressure and warrants further investigations (Lubrano et al. 2015; Chaari et al. 2015).

Assessment of EVLW also can be proposed for personalisation of haemodynamic support in several other categories of patients, including necrotising pancreatitis (Huber et al. 2008), transplantation (Venkateswaran et al. 2013), multiple organ failure, and renal replacement therapy (Compton et al. 2007; Schmidt et al. 2016). It is important to bear in mind that the results of studies focusing on EVLW are strongly dependent on protocol and individualisation of target values (Trof et al. 2012).

Bedside assessment of EVLW has the potential to provide additional information regarding fluid status and to personalise therapy in a wide spectrum of ICU patients. Thus, EVLW plays an important diagnostic and prognostic role in sepsis, ARDS, circulatory shock, complicated perioperative period, and other high-risk patients, and was included into the current standards of their management (Cecconi et al. 2014). Assessment of EVLW should be an integral part of personalised resuscitation to improve outcome in patients at risk of PO with fluid restriction when EVLW exceeds 10 mL/kg. While TPTD remains a bedside “gold standard” in critically ill patients, evaluation of EVLW by using ultrasound has a great potential for further progress in other clinical scenarios.

Mikhail Kirov is a member of the MAB of Pulsion/Getinge and Philips. Vsevolod Kuzkov and Lars Bjertnaes declare no conflicts of interest.


Management of obese patients with ARDS »»

Results of a study conducted by the University of Pittsburgh School of Medicine suggests that sepsis is not one condition, but... Read more

What Did We Learn From Nutritional Monitoring?

Monitoring nutrition in the ICU is significantly different from monitoring other activities. For example, if we look at haemodynamics,... Read more

The following is an overview of the DIVINE trial (Dietary Management of Glucose Variabilty in the ICU) as well as a quick summary... Read more

Preventing malnutrition and enforcing nutritional guidelines   An overview of the key obstacles for the enforcement of... Read more

The Intensive Care Unit - Past, Present and Future

A quick look at why ICUs need to innovate and what lies ahead for the new ICU.  Read more