Share
Download PDF Back
Switzerland is a country of 8.2 million inhabitants, who mostly live outside one of the six major cities: Zurich (384,786 inhabitants), Geneva (191,557), Basel (174,491), Lausanne (132,626), Berne (128,848) and Winterthur (105,676) (Bundesamt für Statistik 2015). Switzerland is composed of 26 cantons that enjoy a great deal of independence from the federation. The jurisdiction of the emergency service and hospital structure mainly lies with these cantons (Wyss and Lorenz 2000), although smaller cantons collaborate on many aspects. For example, Basel University Hospital (its official name translates as “University Hospital of both Basels”) is a joint undertaking of the two cantons Basel City and Basel Country.
Healthcare System
Every Swiss inhabitant, regardless of nationality, is obliged to obtain healthcare insurance that in its base tariff covers the costs of healthcare and medication listed in a legal document. Insurance for accidents, both during work or leisure, is further provided through employers, who insure their employees, usually with one of the few major companies that provide this type of coverage. The government subsidises insurance fees for the needy.
The Swiss healthcare system is among the most expensive in the world. In a 2006 comparison of the costs of healthcare in OECD member countries, Switzerland came second after the United States, with average expenditure of 11.1% of GDP on healthcare (OECD 2010). However, in the most recent comparison of the quality and performance of healthcare systems among the 197 member states of WHO, Switzerland was rated second in the overall quality of its system (“attainment of WHO-goals”) and 20th in performance (where quality is compared to costs) (WHO 2000).
Emergency Medicine
As in most western countries, major emergency rooms are usually part of a university hospital, of which there are five in Switzerland: Basel, Berne, Geneva, Lausanne and Zurich. In 2006 there were 138 hospital-based emergency rooms in Switzerland, of which 21 (including the five affiliated to a university) provide care to more than 20,000 patients per year (Sanchez et al. 2006).
As pre-hospital emergency services are largely regulated (and often provided or commissioned) by cantons, there is a great diversity of modes of service. This article therefore focuses on the situation and numbers from Berne.
As the canton of Berne covers a large alpine area and its university hospital is the closest by air to most of the Swiss Alps, patients injured when farming the steep slopes or during sport make up a comparatively large portion of emergency patients here (see Table 1), leading to a relatively young population of patients (see figure 1). This may further explain why caring for hypothermic patients is comparatively common in the Berne University emergency room. 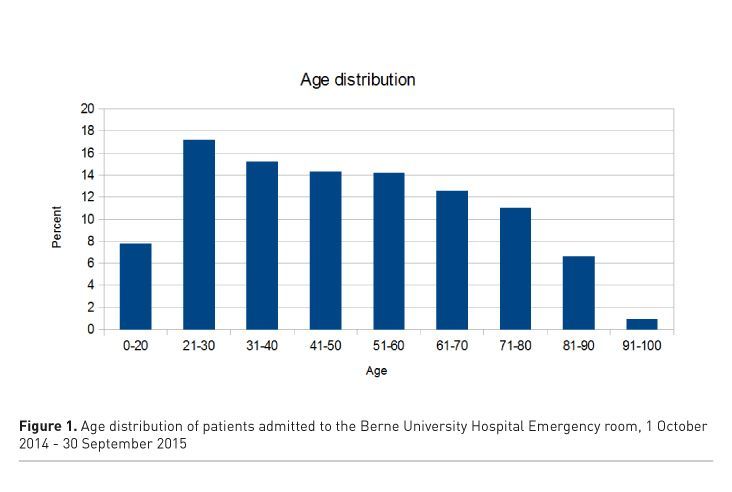 Pre-hospital emergency service in the canton of Berne is mainly provided by Rega and Air Glacier (both providing a physician-staffed helicopter rescue service) and the ‘Sanitätspolizei’ (translated as ‘rescue police’) on the ground. The Sanitätspolizei staffs one car with an emergency physician around the clock that can meet the emergency medical service at the scene if needed, but paramedics in the usual rescue operation are fairly well trained and are competent to provide a number of medical procedures and treatments, including administering selected medications or providing advanced airway management.
Once on their way to an emergency room, more seriously ill patients are typically transported to one of the larger hospitals by the Sanitätspolizei. Most patients in Swiss emergency departments, however, are walk-in patients who present themselves (and most of the time are treated and discharged: see Table 1). Around 60% of all patients presenting to the emergency room in Berne are discharged home. Only around 5.7% are admitted to the intensive or immediate care unit. Intensive care specialists can typically expect a complete diagnostic workup of patients transferred to the ICU, including collection of microbial samples, calculated antibiotics, lumbar puncture and the collection of procedural statements from all relevant disciplines. In Berne, almost the only measure we omit in the emergency room is inserting a central venous line into patients before admitting them to the ICU, because doing so could limit the ICU's options for extended haemodynamic monitoring, with either PICO catheters or a pulmonary artery catheter, which is usually inserted together with a central venous line.
Emergency Rooms
Most hospitals throughout Switzerland now operate as interdisciplinary units, but there are still some older systems, in which patients are separated along the lines of surgical care or internal medicine (Sanchez et al. 2006). The emergency room at Berne University Hospital is an interdisciplinary unit within the department of emergency medicine, intensive care and anaesthesiology and sees all adult patients with an interdisciplinary team. As in most other emergency rooms throughout the country, patients are classified according to the urgency of their treatment by specially trained nurses using a standardised triage model (Hallas 2006; Hollimann et al. 2011). Urgent treatment (for around 7.5% of our patients) is usually provided within one of the three shock rooms, while patients with minor complaints can be referred to an integrated ‘fast lane’, staffed with one general practitioner from 8am to 10pm every day. Discharged patients can also be scheduled to revisit within this fast lane concept.
Aside from patients who walk in or who are brought in through an emergency service, the emergency room at Inselspital Berne sees all non-planned patients referred to any of the specialities at the University Hospital from an outside clinic. In total, we see more than 40,000 patients a year, with numbers continually rising for the last five years. Around 18% of these patients are brought in by ambulance or helicopter, slightly below half (46%) present themselves and the remainder are referred to us from various sources, including external hospitals, general practitioners, the police, psychiatric institutes or prisons (see Table 1). Those patients presented by the police or referred from prisons are a special feature of Berne, as the university hospital here is the only one in Switzerland that runs a specialised ward for detainees with all medical care available. 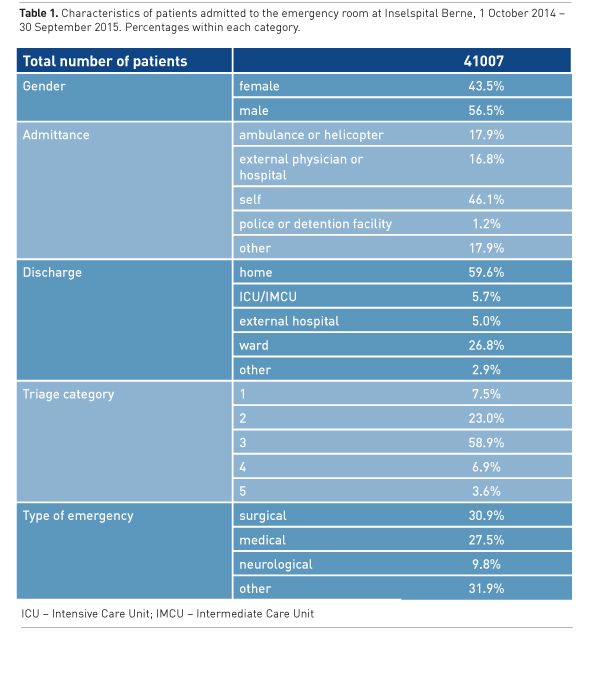 Physician Education and Training
Current undergraduate teaching of emergency medicine is rather sparse in Europe (Smith et al. 2007). Education of physicians working in emergency medicine in Switzerland is regulated through the Swiss Society of Emergency and Rescue Medicine (SSERM). It offers two types of degrees, termed 'certificates of ability': one for preclinical and one for clinical emergency medicine. Both curricula are available online (sgnor. ch/faehigkeitsausweise). While the certificate for preclinical medicine is available to every physician who has completed the three year curriculum, the certificate for clinical emergency medicine is only available once candidates have completed residency and have obtained a degree in internal medicine, surgery, anaesthesiology, intensive care, orthopaedic surgery, traumatology or cardiology. To obtain the certificate, one further needs to participate in various courses (including Focused Assessment with Sonography in Trauma (FAST), Advanced Trauma Life Support® (ATLS) facs. org/quality%20programs/trauma/atls and Advanced Cardiovascular Life Support (ACLS)) and complete an 18-month rotation in an accredited emergency room. The curriculum is based on the curriculum of the European Society of Emergency Medicine (EUSEM), and the catalogue of learning objectives is an adaptation of the English Emergency Medicine specific learning objectives. The degrees in clinical or preclinical emergency medicine further require that the student passes a final assessment. However, emergency medicine is currently not available as a separate residency training in Switzerland (Osterwalder 1998), and the two certificates of ability do not substitute for a residency programme, but may be completed as part of a residency training. Maintenance of certification requires physicians in Switzerland to obtain a predefined number of credits for continuous education activities, but currently does not involve reassessments.
Acknowledgements
The authors would like to thank Meret Ricklin, PhD and Sabina Uttiger, both from the Department of Emergency Medicine at Inselspital Berne, for providing data for this article.

The ongoing economic crisis in Greece and inflow of refugees has led to changes to the pre-hospital emergency medicine services.... Read more

Presents the main principles of the Norwegian acute healthcare system. Norway is a rather small country with a population... Read more

What happens before patients arrive in the ICU? We know that status pre-ICU is associated with outcomes after patients leave... Read more

Delirium (acute brain dysfunction) can be a complication of critical illness. Brain organ dysfunction can manifest as a... Read more

This article focuses on the type of fluid available and respective indications in the course of trauma resuscitation according... Read more

Emergency Medicine, Switzerland How emergency medicine is organised in Switzerland, focusing on Berne