Share
Download Article Back
The ongoing economic crisis in Greece and inflow of refugees has led to changes to the pre-hospital emergency medicine services.
Greece is a country of 10.1 million inhabitants, half of whom live in six cities: Athens, Thessaloniki, Heraklion, Patra, Larissa and Ioannina. In recent years the country drew media attention because of the financial crisis and the inflow of refugees, which often pushed state services and infrastructure to the limit. Nevertheless, along with problems, new chances emerged.

The Greek healthcare system is a mixed system, combining Social Health Insurance (SHI) and central financing of the National Health System (NHS). The country is divided into seven administrative health districts. There is an uneven distribution of public facilities and staff across the country, with most of them sited in urban areas (OECD/European Observatory on Health Systems and Policies 2017). Each region has several hospitals and smaller health units under its jurisdiction, but the pre-hospital emergency care services (PEMS) are an independent public institution. Until 2013 hospitals had separate limited ambulance services for non-emergency cases (transport of hospitalised patients and, when needed, biomedical material). An administrative reform in late 2013 discontinued hospitals’ ambulances services and transferred all patient transportation under the umbrella of PEMS.
You might also like: Pre-ICU health organisation in Norway

PEMS were developed during the mid-1980s with the foundation of the National Center of Emergency Care (NCEC or “EKAB”); which is entirely funded from the state budget. NCEC central is located in Athens, and the country is divided into 12 independent departments. Each has its own dispatch centre (DC) and is responsible for providing PEMS in a certain geographical area (ekab.gr/chorotaxiki-katanomi) (Figure 1). The NCEC phone number is 166; indirect calls can also be realised via the 112 phone number (European Commission Communications Committee 2017). The working model is a mixture of the classical European and American model (Al-Shaqsi 2010). Ambulances and DCs are staffed by emergency medical technicians (EMTs) with advanced training, while emergency medical service (EMS) physicians are also engaged in pre-hospital acute care as DC coordinators or mobile intensive care unit physicians at the scene. Education of PEMS staff apart from doctors is unified, but there are no official levels of PEMS training. Moreover, emergency medicine has not yet been formed as a separate subspecialty or specialty. Physicians participating in the system are exclusively employed by NCEC and come from different background specialties (mostly anaesthesiology, general surgery, and cardiology) (World Health Organization. Regional Office for Europe & European Union 2008). The only official postgraduate programme offered for medical doctors is the 12-month PEMS postgraduate educational programme in pre-hospital emergency medicine. 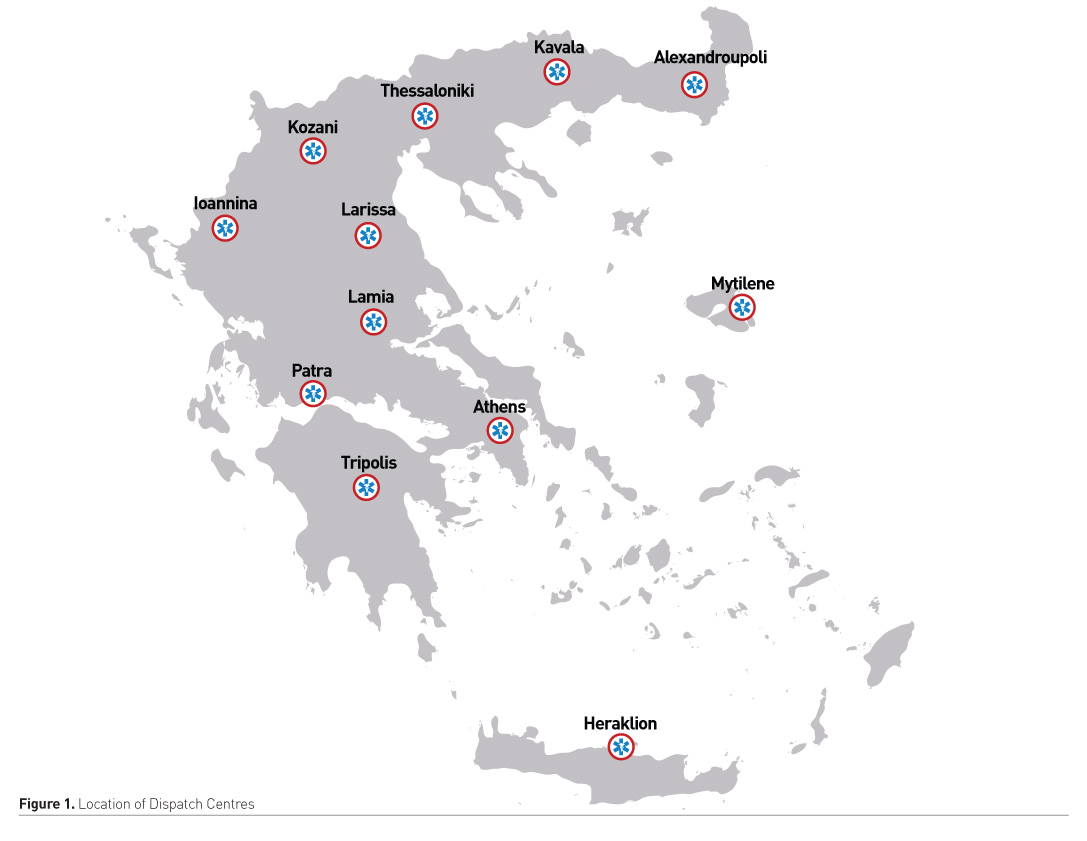 The numbers and data of this article come from the Thessaloniki DC in northern Greece, which is the second largest in the country. It answers an average of 32,000 phone calls and manages about 7000 emergencies every month (Aslanidis et al. 2016). For the same time interval, the biggest DC in Greece (Athens DC) answered 160,000 phone calls and managed about 30,000 emergencies.

The Greek healthcare system was not well prepared to cope with the challenges imposed by the deep and lasting economic crisis (Economou et al. 2014). A profound impact on almost every aspect of healthcare emerged (Laliotis et al. 2016). It is no surprise that over 200 articles are dealing with the subject Financial crisis and health in Greece after 2009 (Pubmed Search 2018).
Within this framework of constantly increasing population needs, underfunding of the public sector, uneven distribution of health resources, medical understaffing and a ‘brain drain’ phenomenon, the refugee crisis in the last years exacerbated an already very difficult situation. Only for the period January 2015- June 2016 the system had to deal with an inflow equal to almost 10% of the country’s population (United Nations High Commissioner for Refugees Bureau for Europe 2016).
Most published studies deal with the consequences of the aforementioned at hospital emergency department (ED) level. Higher use of public ED services, public hospital dental and obstetric services (Economou et al. 2014), neurological services (Bougea et al. 2016), higher incidence of physical abuse (Kontos et al. 2017a) and soft tissue infections are some of the findings reported (Kontos et al. 2017a). Still, the overall impact assessment of the economic and refugee crisis is biased by the lack of a standard quality of acute hospital care network system. There is no widespread periodical public reporting based on a standard set of quality indicators (e.g. hospital case-fatality rates for acute myocardial infarction [OECD/European Observatory on Health Systems and Policies 2017]).
At the same time, PEMS usage has increased over the years (Aslanidis et al. 2016) (Figure 2). The more interesting fact is the change of type of PEMS cases. 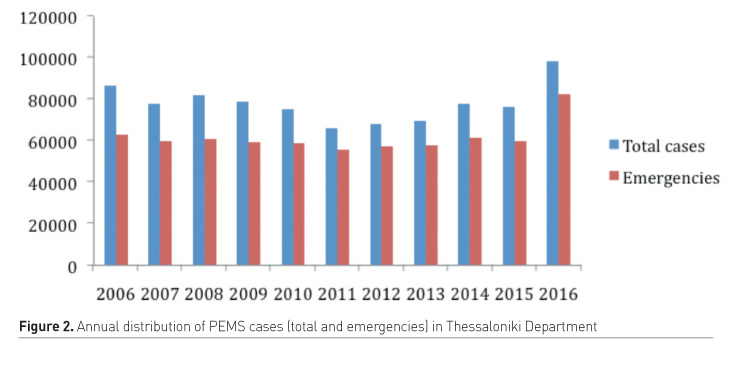 The only optimistic feature has been the decreasing trend of car accident-related trauma (OECD/European Observatory on Health Systems and Policies 2017; Aslanidis et al. 2016). On the contrary, suicides, violence-related trauma and acute alcohol intoxications cases steadily increased (Aslanidis et al. 2016). An increase in complications and exacerbations of chronic conditions (e.g. hypoglycaemias in diabetic patients, COPD exacerbations) managed by PEMS seem to confirm the high rate of unmet health needs reported in other studies (OECD/European Observatory on Health Systems and Policies 2017; Kotsiou et al. 2018).
In addition, managing medical emergencies for refugees’ camps appeared to affect PEMS workload, more in terms of quality than in quantity. The only study dealing with the subject comes from Northern Greece. During a 6-month period in 2016, medical emergencies from 15 refugees’ camps that were handled by PEMS contributed to an increase of ‘only’ 3-5% in the total number of emergency cases. However, the geographical distribution of the camps and, mainly, the character of the cases tell a different story. Most of the camps were located several kilometres away from the main city; thus, time engagement of PEMS for those cases often created dispatching problems. More than 70% of the cases concerned people up to 45 years old. In comparison with the general population, a high incidence of paediatric and obstetric emergencies were recorded. Trauma cases were also high (35%), with equally high rates of crime-related injuries (Nikolaidou et al. 2017).

It became obvious that both organisational and structural changes were needed in order to cope with the challenges posed by the aforementioned factors. Major efficiency-oriented and infrastructural reforms were initiated after 2010, all based on three priority axes: universal health access, transparent, modern and efficient health system administration; and fair and sustainable financing (OECD/European Observatory on Health Systems and Policies 2017). PEMS was not an exception.

During 2017 a primary care health plan was launched in order to prioritise primary care. Launching of fully autonomous emergency departments, mainly with staffing in hospitals is also part of that reform (OECD Health profile Greece 2017). The latter two are expected to have a great effect on PEMS usage.
PEMS DCs’ information systems have also been modified, in order to enhance management of emergencies and interconnectivity among different DCs in the country. Linkage of those systems with the existing hospital information systems is expected.
Also, an attempt to modernise ambulance vehicles, medical equipment, expand helicopter PEMS and launch naval PEMS has been initiated. Collaboration with other public services, both civilian and military, and with the private sector, which mainly contributed to the system with donations, is essential to this effort.

The termination of hospital ambulance services in late 2013 increased PEMS workload (Aslanidis et al. 2017). This triggered a discussion about the future official formation of different level of EMS.
The PEMS Public Vocational Institute curriculum has been modified. Future EMS staff must complete an extended curriculum of 1500 hours theory and 960 hours of ambulance practice before sitting for the National Accreditation Examination (Ministry of Health 2018). The change is tremendous, especially in practice, compared to the old syllabus that contained only 120 hours of ambulance practice. Programmes of continuing professional development for PEMS staff, alongside public educational programmes were also intensified.
Emergency medicine has been recognised as an official subspecialty and a national committee formed in order to suggest the minimum educational requirements, in accordance with the European Society of Emergency Medicine (EuSEM) curriculum (Härtel et al. 2017).

The information systems deployed during recent years (OECD/European Observatory on Health Systems and Policies 2017) have created a huge national data-gathering network. Data analysis to fully evaluate all these changes that took place as a PEMS response to the challenges posed by economic crises and inflow of refugees is underway.