Dysglycaemia in the critically ill

As has been pointed out, the benefits of tight glycaemic control in the ICU have by no means been clearly established or accepted. In 2010 a meta-analysis of seven prospective randomised studies concluded that intensive insulin therapy in mixed ICU patients was not supported by evidence.19

Another large multi-centre study in 45,000 ICU patients found that while hyperglycaemia, hypoglycaemia, and high glycaemic variability were each independently associated with mortality, diabetic status modulated these relations such that patients with diabetes may benefit from higher target glucose ranges than those without diabetes.21

What therefore is the best way to manage blood glucose in the ICU?

The digestion and absorption of carbohydrates is a complex sequence of events starting in the mouth with amylase, which breaks starches down into shorter-chain sugars. Dextrins and sucrose are broken down further by specific enzymes, while other enzymes (lactase and maltase) at the brush border of the gut contribute to the breakdown of lactose and the oligosaccharides. The end result is glucose, which passes into cells and is released into the bloodstream.

A systematic review of the literature in this area included RCTs which compared DSFs with standard formulas, finding that DSF was more effective in controlling glucose profiles. The requirement for insulin in patients with diabetes was lower when using these DSFs.22 The authors speculated that this may be due to the type of carbohydrate used in these formulations, which may be more slowly digested and absorbed than in standard formulas.

There are not many studies on the role of DSF in the ICU. A small study of DSF in hyperglycaemic, mechanically ventilated, critically ill patients assigned around 50 patients to each of three groups, two of which used DSFs while the third used a standard control formula.23 Insulin requirements were lower in the two DSF groups, while glycaemic control was significantly better.

An important physiological issue that we have to consider in feeding critically ill patients is the incretin effect. Following oral feeding, hormones released by the GI tract will stimulate the pancreas to release insulin. In healthy, non-diabetic subjects, administration of glucose by the IV rather than oral route results in the stimulation of much lower quantities of insulin, as the gut hormones are not produced in the same quantities. In diabetic patients, there is very little difference between the two routes of administration. 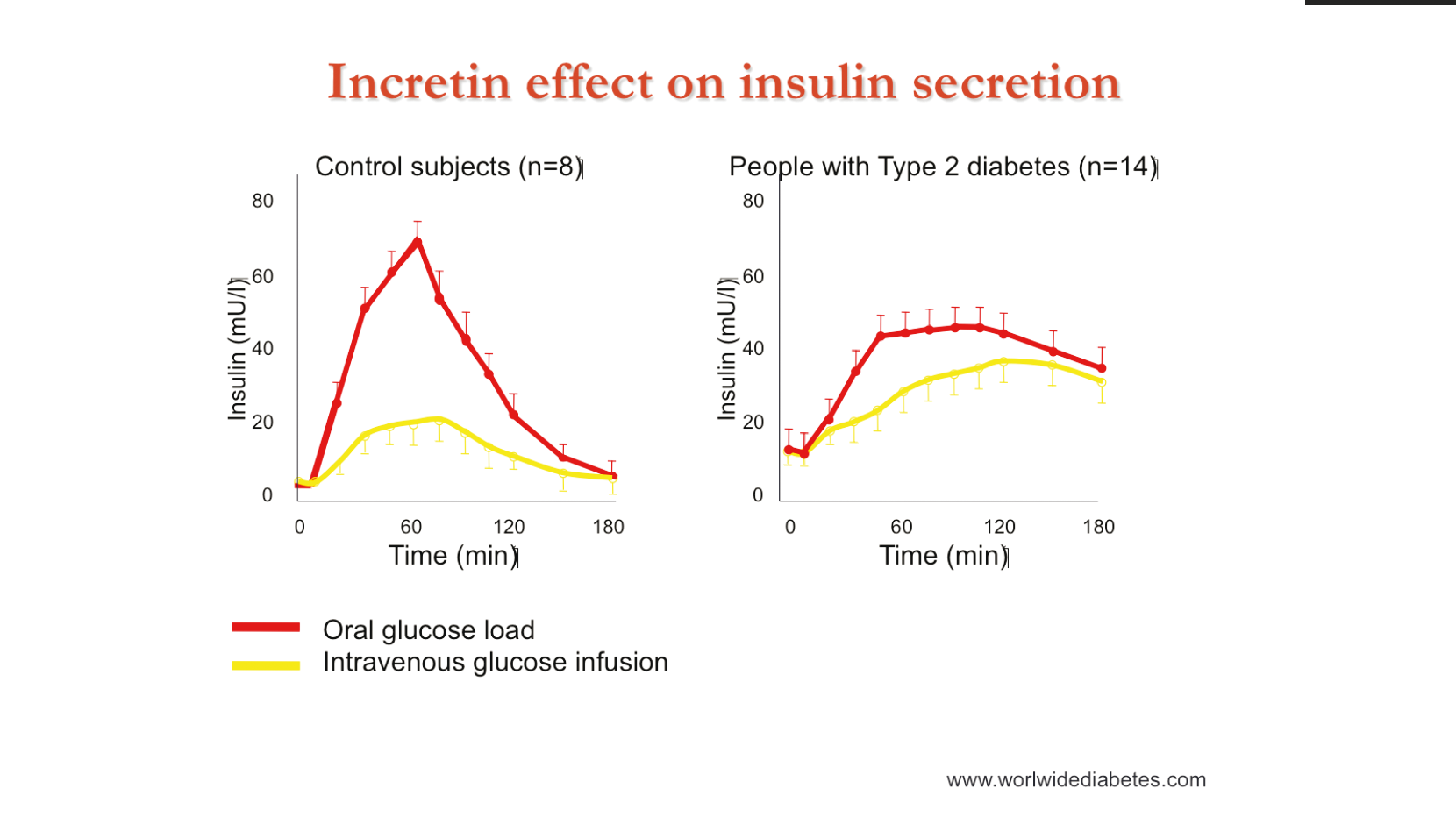 A meta-analysis of 13 studies examining the influence of enteral vs parenteral nutrition on glucose control in patients with acute pancreatitis confirmed that PN was associated with an increased risk of hyperglycaemia and therefore an increased requirement for insulin.24

In patients receiving continuous enteral feeding, if this is associated with a release of endogenous insulin then the amount of exogenous insulin needed to maintain a steady blood glucose level would be lower during feeding and higher during interruptions. Hence, the calculated insulin sensitivity would fall when feeding is interrupted and rise when feeding is restarted.

New guidelines for glucose control were published in 2010 just after the controversy between the Leuven studies and the NICE-SUGAR study.26 Unfortunately these guidelines reflect the uncertainty and lack of evidence: regarding carbohydrate intake it is not possible to suggest a general recommendation of maximal or minimal amounts of intravenous or enteral carbohydrates to be administered to critically ill patients regardless of the type, the severity of the pathology and the delay from onset of disease. It is also suggested that hyperglycaemia be reduced by restricting intravenous glucose in critically ill patients.

A pragmatic approach is to begin EN as soon as possible, adapting the infusion rate to the tolerance of the patient, trying to limit caloric debt rather than to achieve full matching of energy expenditure. In some centres, routine clinical practice includes the administration of low doses of IV glucose (50-100g/day) as a maintenance solution. As well as this, the use of dynamic scales for the dosing of insulin and attempts to minimise glycaemic variability are strongly recommended.

CO2 in the critically ill

CO 2 exerts potent effects on lung biology that could be clinically relevant in critically ill patients, in particular those... Read more

There are a number of complications related to the use of decompressive surgery. The most important thing to bear in mind is... Read more

Do we need yet another standard operating procedure? Variability in end-of-life care would seem to demand a standard... Read more

(2020-01-25 10:38)
HOW I GOT MY EX HUSBAND BACK WITH THE HELP OF REAL AND EFFECTIVE SPELL FROM DR Osasu My name is Olivia Jayden, I never thought I will smile again, My husband left me with two kids for one year, All effort to bring him back failed I thought I'm not going to see him again not until I met a lady called Jesse who told me about a spell caster called Dr. Osasu , She gave me his email address and mobile number and I contacted him and he assured me that within 48hours my husband will come back to me, In less than 48hours my husband came back started begging for forgiveness saying it is the devils work, so I'm still surprise till now about this miracle,i couldn't conceive but as soon as the spell was cast,i became pregnant and gave birth to my third child,if you need any assistance from him you can contact him via:email: [email protected] Or WhatsApp or call him now:
+2347064365391 . Dr.Osasu also cures: 1. HIV / AIDS 2. HERPES 1/2 3. CANCER 4. ALS (Lou Gehrig’s disease) 5. Hepatitis B

(2020-08-30 13:17)
I made a promise to tell my testimony all over the globe once my man come back to me and my husband came just as DR Iwisa told me when he helped me. I made the right choice to have contacted DR Iwisa the great spell caster who is capable of helping you solve your problems. My man left me to suffer and i never believed that he will come back to me again but when i contacted DR Iwisa he assured me that my man will come again. he gave me some list of items to buy but i could not get them in my country and so i sent him the money and he bought the items and prepared the perfect love spell. My husband ran back to me in 3 days time begging for forgiveness THIS IS SO REAL AND GENUINE. I was so surprise that the spell worked just as he told me. This is so amazing and i want you to believe because DR Iwisa is so real and i urge you contact him now on his email so that he can also help you the way he helped me. email is [email protected] and you can also contact him with his phone Call & WhatsAp +27730886631
https://superiorspellhome.webnode.com/