The aim of the present review is to summarise the current evidence for the use of biomarkers in facilitating therapeutic decision-making by guiding and tailoring the prescription and the duration of antibiotic therapy. The main benefits of this strategy are a potential reduction of antibiotics overuse in critically ill patients.

Overuse of antibiotics and its consequences represent a big challenge for healthcare services worldwide. One reason is the change in profile of inpatients observed during the last decades: they are increasingly older, have more comorbidities and are frequently immunosuppressed (Zuckerman et al. 2007). As a consequence, multidrug-resistant organisms are becoming very common as the aetiology of healthcare associated infections (Martin-Loeches et al. 2014), and frequently these pathogens are isolated in patients with infection acquired in the outpatient setting. Therefore, we have in combination the difficulty of prescribing antibiotics to more vulnerable hosts with more difficult to treat infections. Clinical signs and symptoms are in general of limited value. As a result the prescription of antibiotics, often a combination of broad-spectrum agents, is done in an early and empirical fashion (Klein Klouwenberg et al. 2015). However, administration of unnecessary antibiotics will develop bacterial resistance against these drugs.

Currently, the most important aspect to improve outcome is early recognition of infection and prompt initiation of appropriate empiric antibiotic treatment. Initiation too late or inappropriate antibiotic therapy is associated with adverse outcomes (Ferrer et al. 2014). In addition there is an unmet need for data regarding when to stop antibiotics in two particular clinical scenarios:

A biomarker or biological marker generally refers to a measurable indicator of some biological state or condition (Martin-Loeches et al. 2015). In the context of infection, the ideal biological marker would discriminate when a patient needs to discontinue or de-escalate an antibiotic course.

It is now clear that at least for patients with severe infections the timing of antibiotic onset is markedly associated with the outcome (Kumar et al. 2006; Ferrer et al. 2014). However, data concerning the ideal duration of antibiotic therapy is scarce, even though growing evidence from recent studies suggests that short courses of treatment are effective and safe. Interestingly, most of these studies did not use biomarkerguided protocols to reduce antibiotic use.

Two landmark studies specifically evaluated the impact of fixed durations of antibiotic therapy to treat severe infections in intensive care unit (ICU) patients (Chastre et al. 2003; Micek et al. 2004). The PneumA trial (Chastre et al. 2003) was a prospective randomised controlled trial (RCT) in 51 French ICUs, designed to assess whether 8 days was as effective as 15 days of antibiotic therapy in microbiologically documented late-onset ventilator-associated pneumonia (VAP) (n=402). No difference in the all-cause mortality rate was observed between the two groups (18.8% vs. 17.2%). In the subgroup of patients with VAP caused by non-fermentative Gram-negative bacilli, patients treated for 8 days had higher rates of recurrence of infection as compared to the longer treatment group (40.6% vs. 25.4%, p<0.05), but with no excess of mortality (23.4% vs. 30.2%, p=NS). In addition, the rate of emergence of multidrug-resistant bacteria was significantly lower in the 8-day therapy group (41.2% vs. 62.3%, p=0.04).

The second study (Micek et al. 2004) was a single-centre prospective RCT designed to evaluate the effectiveness and safety of an active discontinuation policy for the duration of antibiotic therapy for VAP (n=290). The active discontinuation policy consisted of a) initial administration of adequate antibiotic treatment and b) antibiotics should be discontinued if b.1) the infiltrates were considered to be non infectious aetiology or b.2) the signs and symptoms suggested that the active infection had resolved. The authors showed that the active discontinuation policy could safely decrease the duration of antibiotic therapy to 6 days in comparison to the standard of care, which was 8 days (p=0.001). Both groups presented comparable clinical outcomes, namely: hospital mortality, ICU and hospital length of stay (LOS) (p=0.357, p=0.798, p=0.865, respectively). In addition, the rate of VAP recurrence was similar in both groups (p=0.667).

A randomised controlled trial (RCT) on non-critically ill patients with complicated intra-abdominal infections demonstrated that, in patients with adequately controlled infections, a fixed short course of antibiotics (median duration of 4 days) produced similar outcomes, namely rate of septic complications, as compared to 10 days of therapy (Sawyer et al. 2015). Taken together, these findings all suggest that, even in ICU patients with severe infections, namely VAP and intra-abdominal infection, the duration of antibiotic therapy can be safely shortened to 6-8 days, regardless of the use of biomarkers.

On the contrary, with the exception of two RCTs (Jensen et al. 2011; Annane et al. 2013), all the other PCT-guided antibiotic stewardship trials showed that using very similar PCT-algorithms was associated with a shorter duration of antibiotic therapy. Of note, this reduction was achieved with no apparent harm; i.e., there were comparable ICU LOS, relapse/recurrence rates of infection as well as mortality rate between patients of the PCT-guided group and controls (Table 1). 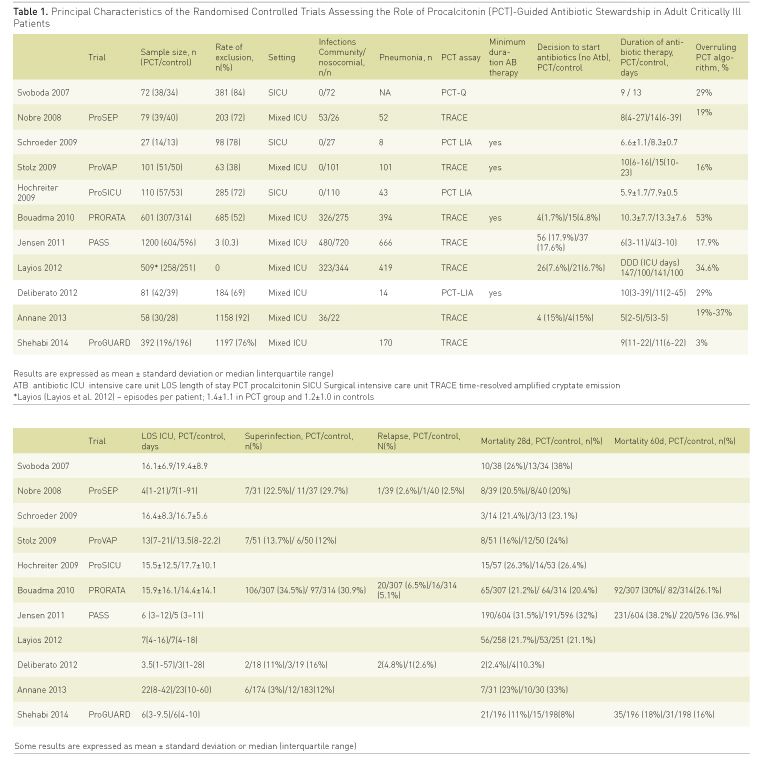 In a recent meta-analysis (Schuetz et al. 2012) it was clear that for ventilator-associated pneumonia (VAP), use of PCT-guided algorithms allowed a reduction of 3 days (from 14 to 11 days) in the mean duration of antibiotic therapy. However, in some trials the shortening of the antibiotic therapy courses was achieved due to excessively long and fixed antibiotic treatments in the control groups (Póvoa and Salluh 2012). This strategy, i.e., fixed and long courses of antibiotics in the control groups, may have led to an ‘artificial’ reduction of antibiotic treatment in the PCT-based arms. In addition, these trial designs also did not take into account data available for more than a decade from trials showing that a 6 to 8-day course of antibiotics is effective and safe to treat severe infections (Chastre et al. 2003;Micek et al. 2004).

How Can we Properly Use Biomarkers?

With the previously mentioned limitations in mind, we should ask: how can we properly use biomarkers such as PCT and C-reactive protein (CRP) to guide antimicrobial therapy (initiation and duration) in severe sepsis? (Vincent and Teixeira 2014). First, we believe that future clinical RCTs should use less strict entry criteria that would better reflect our real-life ICU patients with sepsis. Second, a great deal of effort must be put into conducting multicentre studies, involving a large number of patients, ideally in different regions of the world. Lastly, biomarker-guided strategies must be tested against a comparator that actually reflects the “best care” (i.e., implementation of the best available evidence), which increasingly balances toward shorter courses of antibiotic therapy instead of the highly variable, and usually longer than necessary, “standard care”. In our opinion, it means comparing PCT-algorithms with control treatment in which the maximum duration of antibiotic therapy is set up in 7-8 days (Chastre et al. 2003; Micek et al. 2004). Until these studies are performed and their results become available, clinicians should perhaps use a “double-trigger” strategy as proposed by Oliveira et al. (2013). In this RCT, in which a PCT-guided protocol was compared to a CRP-guided strategy, antibiotics were stopped according to clinical response to therapy associated with either a pre-established reduction in the circulating levels of these biomarkers or the completion of 7 full days of treatment, whichever comes first. In this single-centre study that evaluated patients with severe sepsis and septic shock, PCT and CRP were similarly effective in ensuring an early interruption of antibiotics [7(6-8.5) vs. 6(5-7) days, respectively].

Proposal of an Integrative Algorithm

Considering the critical revision of present data, we propose an integrative algorithm, incorporating the available evidence on using PCT or CRP-guided strategies, in addition to clinical and laboratory information, to reduce antibiotic therapy in critically ill patients. Our proposal is presented in Figure 1 (Salluh et al. 2014). It must be stressed that biomarkers represent only one of the available tools to promote antibiotic stewardship and should never be used as a single tool. Additional measures to reduce inappropriate antibiotic exposure should always be considered. Different strategies have been designed to implement and operationalise antibiotic stewardship in critically ill patients. Antibiotics are very powerful drugs, that when adequately and used in a timely manner make a huge difference in the prognosis of severe sepsis and septic shock patients. Antibiotics only treat infections, not sepsis-like syndromes. But it is also important to recognise that antibiotics are not innocent players; their use, in particular if prolonged and inadequate, is associated with increased duration of mechanical ventilation, LOS, mortality, recurrence of infection, toxicity, emergence of bacterial resistance and costs.

To approach this complex problem we need new approaches and helpful tools. A strategy like the one we propose, although not validated, puts together valuable and reliable information from different RCTs. This algorithm takes into consideration a “double-trigger” strategy (time/ clinic course and biomarker level) and could be implemented as a helpful tool in the daily clinical decision making process at the bedside.

Pedro Póvoa has unrestricted research grants from ThermoFisher Scientific and Virogates. The other authors state that they have no competing interest with the subject.

Where Are We Now? Acute kidney injury (AKI) has been recognised as a major public health problem. It affects >50% of patients... Read more

An overview of the recent advances in the diagnosis and treatment of immune system dysfunction in sepsis. Sepsis is defined... Read more

The aim of the present review is to summarise the current evidence for the use of biomarkers in facilitating therapeutic decision-making by... Read more

Acute respiratory distress syndrome (ARDS) seems to be underrecognised, under-treated and associated with a high risk of mortality, according... Read more