Early recognition and close monitoring of acute kidney injury (AKI) is vital in the ICU, given AKI’s high prevalence and effect on length of stay and risk of re-hospitalisation and death (McCullough et al. 2013). As more becomes known about biomarkers, intensivists need to be well-informed about the benefits of currently available kidney biomarkers. While serum creatinine is still the standard method to determine kidney dysfunction, it has major limitations. It increases too slowly to detect worsening of kidney function in a timely manner and it decreases too slowly when kidney function is improving. In addition, it largely depends on other variables (McIlroy et al. 2010; Mårtensson et al. 2010). Most other biomarkers for acute kidney injury are affected by inflammation, and most AKI patients have inflammation, as sepsis and septic shock are the primary cause of AKI (Zarjou and Agarwal 2011). Hence, these biomarkers have failed to reliably predict AKI in ICU patients (Bell et al. 2015).

The sphingotest® penKid immunoassay measures the plasma level of penKid, a stable surrogate marker for the instable Enkephalins (Ernst et al. 2006). Enkephalins are endogenous peptide hormones that are highly expressed in the kidney and regulate renal excretion (Denning et al. 2008; Sezen et al. 1998). penKid is an inflammation independent functional marker that indicates the actual kidney status by predicting the future change in serum creatinine. The highly dynamic nature of penKid enables close monitoring of the changes in kidney status, thereby supporting early clinical decision-making, e.g. regarding the use of nephrotoxic drugs, initiation of renal replacement therapy or discharge.

In a retrospective observational study, physicians from the Emergency Department (ED) Sant'Andrea Hospital, University of Rome Sapienza, analysed the blood of 101 patients admitted to the ED with sepsis (Marino et al. 2015). sphingotest® penKid was used to evaluate plasma levels of penKid and the results were compared to concentration levels of neutrophil gelatinase-associated lipocalin (NGAL). The results showed that penKid correlates with the severity of AKI in septic patients, as determined by RIFLE criteria, while sepsis patients without kidney failure display essentially normal penKid levels. NGAL is elevated above normal in patients with systemic inflammation, even without kidney injury.

Diagnosis of Kidney Dysfunction and Prediction of Adverse Cardiac Events 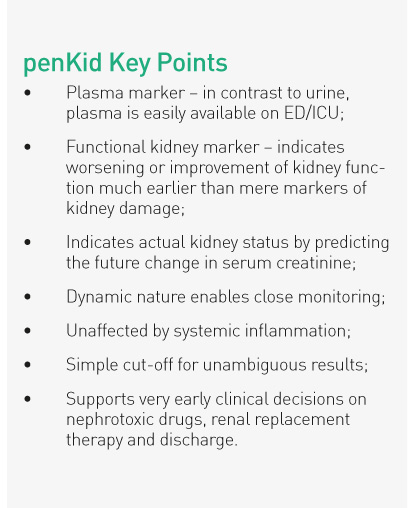 The AKIpredictor: An Online Calculator to Predict Acute Kidney Injury

An overview of the recent advances in the diagnosis and treatment of immune system dysfunction in sepsis. Sepsis is defined... Read more

The transport of critically ill patients for diagnostic or therapeutic procedures carries a particular risk and requires therefore... Read more

A Public Health Threat That Should Be Routinely Included Within Care Quality and Patient Safety Programmes This paper provides... Read more