Editorial Board Member since 2015

Advances in source control in patients with sepsis and septic shock

Share
Download Article Back
In the past decades there have been significant advances in the diagnosis and management of patients with sepsis and septic shock, and overall awareness has increased significantly (Angus and van der Poll 2013). Emphasis is currently on the early detection of sepsis and rapid initiation of fluid administration and antibiotic therapy, all of which have improved outcomes (Rhodes et al. 2017). Nevertheless, discussion remains about the targets for fluid resuscitation, the optimal type of fluid and many other aspects of sepsis management, and this directs scientific research in the field (Perner et al. 2017).
While there is consensus that antibiotic therapy and source control are the major therapies for severe infections, source control has been consistently ignored by many studies, and its exact role, particularly the timing and methodology used, remains uncertain. Source control is receiving only limited attention in the first hour of sepsis treatment, disproportional to its impact on outcome. It has proved hard to accurately define source control, and quantifying it is even more difficult. But insights into the role of source control are evolving, and both the epidemiology and methodology will surely receive more consideration in the next years. Currently, exact data on the impact of source control, or data that provide adequate guidance on the timing and preferred method for source control remain scarce.

The definition of source control has not changed over the years, yet this definition is more a conceptual approach, focusing on the goal of source control rather than the exact method to reach these goals. Source control is defined as the different measures that are used to eliminate the source of an infection, control ongoing contamination and restore premorbid anatomy and function (Schein and Marshall 2002). It is true that source control is most often thought of in patients with abdominal infections because of the ongoing contamination (De Waele 2016) but source control should be considered in every patient with sepsis or septic shock. In fact, up to 45% of patients with sepsis and septic shock require some form of source control (Bloos et al. 2017). Not every patient of course may require a surgical procedure, but also in patients with presumed non-surgical infections source control may be considered e.g. in patients with bloodstream, urinary tract or respiratory infections.
Most of the time the focus is on the first two goals of source control, namely eliminating the source of infection and controlling ongoing contamination. Source control can involve a surgical procedure, percutaneous drainage using a catheter (that either remains in place or not), incision of an abscess, removal of necrotic tissue or removal of an infected device e.g. central venous catheter or external ventricular drain.
Historically, the evidence came from non-randomised controlled trials, mainly in necrotising fasciitis, with multiple case series conducted in the 1990s (Elliott et al. 1996). The data were in favour of an aggressive operative approach. An expert opinion roundtable in the mid 2000s highlighted that appropriate source control should be part of the systematic checklist we have to keep in mind in setting up the therapeutic strategy in sepsis (Marshall et al. 2004).
A practical approach to define source control is rather ambiguous in some guidelines. For instance, in the recent Surviving Sepsis Campaign (SSC) guidelines from 2016 the recommendation was:
We recommend that a specific anatomic diagnosis of infection requiring emergent source control be identified or excluded as rapidly as possible in patients with sepsis or septic shock, and that any required source control intervention be implemented as soon as medically and logistically practical after the diagnosis is made (Rhodes et al. 2017).
Interestingly the recommendation was acknowledged as a “Best Practice Statement”.

Applying source control and its principles in critically ill patients poses specific challenges. First, the patient is more severely ill, with less room for compensating for the consequences or complications of a procedure; second, the urgency of the need for source control is equally different. Leaving a patient exposed to an untreated infection can have more severe consequences compared to patients who present without sepsis, even if antibiotic therapy and fluid resuscitation have been initiated.
The proportion of patients with sepsis that requires source control clearly depends on the type of infection that is causing sepsis. In the multicentre study by Bloos et al. (2014), 42% of patients with septic shock required source control. In this study, the majority of these procedures was surgical (85%), but this may vary according to the source of the infection, presence of ongoing contamination, surgical history and general condition as well as co-morbidities of the patient.

Based on the aspect that source control consists of those definitive measures to control a source of ongoing microbial contamination and to restore anatomy and function, definition of source control can be integrated in five categories (Table 1).

Source control has long been synonymous with a surgical procedure, mostly a laparotomy or other open intervention, but this is changing significantly. Firstly, laparoscopy and minimally invasive procedures have replaced open surgical procedures, although in critically ill patients laparoscopy may be less tolerated. The main evolution regarding source control has been the rise of percutaneous drainage of abscesses in many locations, either ultrasound or CT-guided (Soop et al. 2017). Table 2 provides an overview of the different interventions and how effective they are in regard to the different source control principles.

Open or endoscopic surgery is still the most controlled method of source control. It is very effective in completely draining collections or abscesses and debriding necrotic tissue. Also, restoration of anatomy and function is straightforward.
Percutaneous drainage (PCD) is effective in draining a large part of most collections, although mostly a small residual amount will remain. This is often managed by rinsing the catheter and collection in order to remove the last remainders of the infection. For multiloculated infections multiple catheters may be needed, and also more residual infection may have to be tolerated. Implicitly the residual infection may continue to produce signs and symptoms of infection and the response to the treatment may be more difficult to monitor. Debriding necrotic tissue is even more difficult and again a considerable amount of necrosis may need to be tolerated. Repairing anatomical lesions is not possible using PCD.
But also simple interventions such as device removal can be considered for source control. Removing an obstruction such as a urinary tract lithiasis or choledocholithiasis can be effective in draining the infection, but again no meaningful debridement is possible. Anatomy and function are mostly adequately restored after such a procedure. Open abdomen management can also be part of a source control procedure, effective mostly for draining the abdominal cavity. Restoration of anatomy and function will only follow later.
Strategies for source control are improving continuously and no doubt will do so in the future. The trend towards minimally invasive procedures will continue, with more advanced endoscopic (ultrasound-guided) procedures as the most important development. As an example, transgastric endoscopic drainage and necrosectomy for infected pancreatitis (van Brunschot et al. 2018) is a promising technique that obviates the need for open surgery, often fraught with complications.
It remains to be demonstrated that patient condition makes no difference in selecting the best source control procedure, and in studies reporting on new techniques severity of illness should definitely be considered to make sure that the most vulnerable patient benefits from the most optimal procedure.

Data supporting the role of source control are limited although several studies have recently focused on this important issue. From these data, two relevant aspects are consistently reported: source control adequacy and timing of the intervention.
The impact of source control seems to be unrelated to the administration of appropriate antibiotics. Several studies found that both are independent predictors of mortality (Bloos et al. 2015; Tellor et al. 2015), but there is consensus that without adequate source control, antibiotic therapy may have little if any effect (Figure 1). 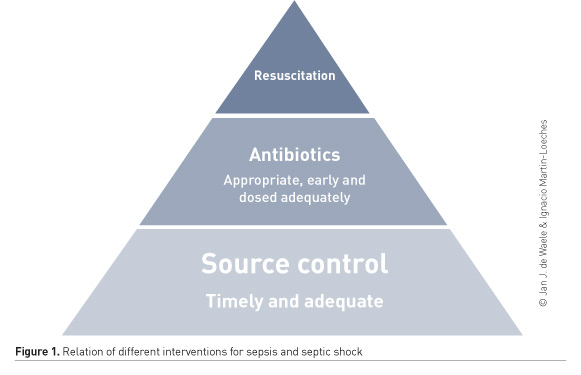 a) Adequacy of source control

b) Timing of source control

Delayed source control can be caused by a delay in diagnosis or in intervention after a correct diagnosis has been made; evidently both require different interventions. An accurate and rapid diagnostic process in patients with sepsis or septic shock, which runs in parallel with the resuscitation and other interventions is key for the former; for the latter, often organisational issues such as operating room or interventional radiology availability may be the primary reason.
The rationale for rapid source control is straightforward (Figure 2), yet few guidelines provide clear and evidence-based guidance on the timing of source control in patients with sepsis or septic shock. The SSC guidelines recommend controlling the source of the infection as soon as medically and logistically practical after the diagnosis is made (with the suggestion to do so within a 6-12-hour window after diagnosis) (Rhodes et al. 2017), whereas the English Royal College of Surgeons recommends controlling the source of the infection within 6 hours in patients with sepsis and immediately in patients with septic shock (Royal College of Surgeons of England 2011). The latest update of the Surgical Infection Society guideline on intra-abdominal infections cites 24 hours as the window in which the source needs to be controlled, unless when patients have sepsis or septic shock, when the intervention needs to be undertaken in a more urgent manner (Mazuski et al. 2017). 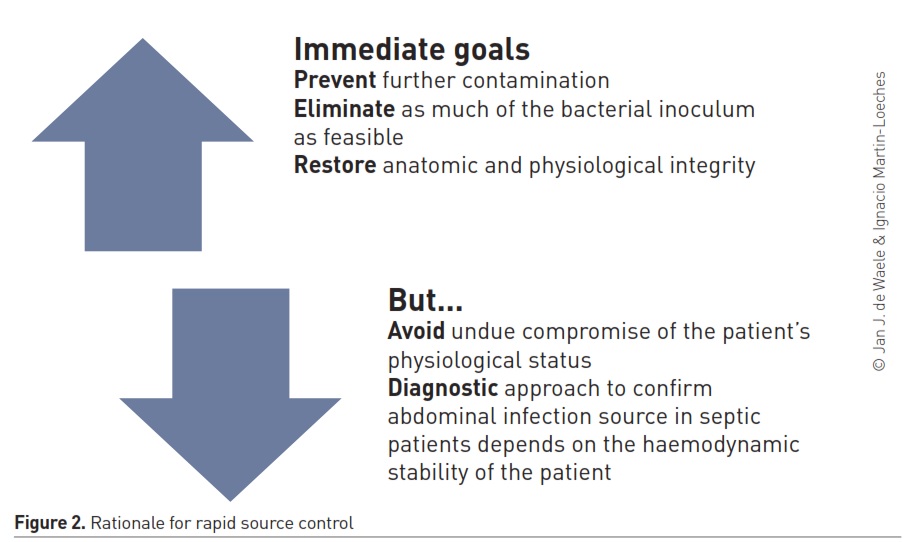 6. Where are we going from here?

It is clear that source control is an important determinant of outcome, but its exact role in critically ill patients, and the relevance of aspects such as timing and methodology of source control requires more attention. This will help us to provide evidence-based recommendations and may also inform targeted randomised studies on this topic. In the context of severely ill patients, not only the factors related to the intervention but also the patient condition, site of infection and relevant co-morbidities may be highly significant in determining outcomes.
Based on the complexity of severe illness, the range of infections where source control is relevant and the choice of source control interventions at our disposal, it is clear that a generalised approach will be inadequate and a highly personalised, carefully timed approach is the best path to follow.

Extravascular lung water as a target for intensive care

The paper highlights the present clinical rationale for extravascular lung water measurement as a key to personalisation of haemodynamic therapy.... Read more

Results of a study conducted by the University of Pittsburgh School of Medicine suggests that sepsis is not one condition, but... Read more

Fluid management during shock from physiology to bedside. Shock is a common life-threatening, generalised form of acute... Read more

Sepsis, septic shock, source control In the past decades there have been significant advances in the diagnosis and management of patients with sepsis and septic shock, and overall awareness has increased significantly (Angus and van der Poll 2013). Emphasis is currently on the early detectio