Summary: Differences in sex and gender may account for gaps in treatment and prevention of cardiovascular disease, but at the same time, it also gives the opportunity for personalised sex and gender-specific medicine.

Typical presentations in medicine are defined in ways that health care professionals can draw on past experiences and education to adequately diagnose, treat, and heal. Yet, when it comes to cardiovascular disease (CVD), a “typical presentation” may not be accurate for half of the population. CVD is the leading cause of death in the United States of both men and women according to the Center for Disease Control (CDC), yet the typical risks factors and presentation for the disease differ in clinically important ways. The impact of sex and gender in health and disease is especially illustrated with CVD as the “typical” criteria for presentation chest pain, diaphoresis, nausea, radiating pain to the left shoulder and jaw, were developed from research on men.

Sex and Gender Impacts on Quality of Care

Sex differences between men and women begin at the cellular level, affecting cellular gene expression and function that is unique to the chromosomes present in the cell (Garcia et al. 2016). Gender is a person’s socialisation that may extend beyond the binary to a larger range of association, expression, and identification. In CVD, sex and gender differences contribute to a lower perceived risk of morbidity in women than in men. When women, their physicians or other non-physician providers, are less aware and less proficient in identifying CVD because the “typical” presentation does not match their male counterparts (Saeed et al. 2017), mortality increases. In the United States, one out of five deaths in women is due to CVD.
You might also like:  Sex and Gender in medicine

When CVD risks are not recognised, women are also less likely to be given aggressive treatment for the prevention of CVD such as lipid-lowering therapy, aspirin, and therapeutic lifestyle changes even when they present with the same risk for atherosclerotic CVD (Abuful et al. 2005). Abuful also noted that physicians suspected chest pain as having an actual cardiac origin more often in men than in women. Physician gender bias in prevention and treatment strategies can lead to serious consequences. While differences in sex and gender may account for gaps in treatment and prevention of cardiovascular disease, it also gives the opportunity for personalised sex and gender-specific medicine. 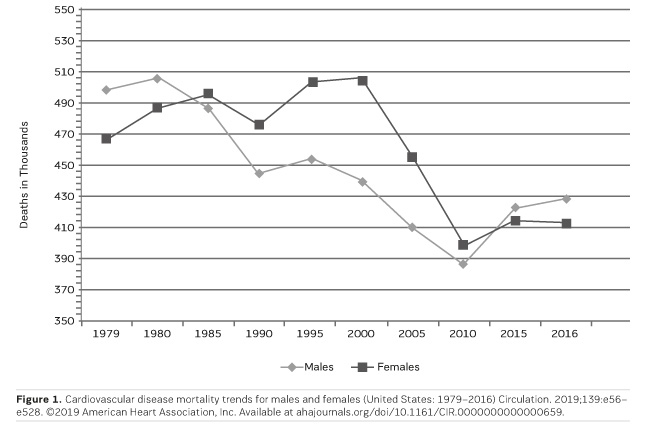 Traditional risk factors for CVD impact both men and women and include age, smoking habits, obesity, high blood pressure, elevated cholesterol levels, and diabetes (Saeed et al. 2017). In a 2017 review by Saeed, these indications themselves present differences in the risk associated with their contribution to the development of CVD in men and women. In a meta-analysis of 75 cohort studies, women smokers showed a 25% greater risk of coronary artery disease than male smokers. Women with type 1 diabetes mellitus had a 37% increased risk of all mortality, and twice the risk of fatal and non-fatal vascular events compared to male counterparts, also with type 1 diabetes. The typical presentation of CVD falls short here, as the calculated risks associated with traditional factors do not treat men and women equally.

Non-traditional risk factors for CVD are associated with the ability of women to bear children, associated with higher oestrogen levels in women, and associated with social and economic stressors. These include gestational hypertensive disorders, preeclampsia, gestational diabetes, autoimmune disorders, depression, and declining oestrogen levels (Saeed et al. 2017). Having increased blood pressure in pregnancy not only contributes to a greater risk for mortality in both the mother and baby, but also puts the mother at risk later on in life for developing high blood pressure and cardiovascular related disease (Ferranti et al. 2016). As women reach menopause, their oestrogen levels decline. Oestrogen protects and enhances the survival of cardiomyocytes within a woman’s heart when placed under stress (Kim et al. 2006). These risks support the notion that a typical presentation of CVD must be further defined to include the sex that it describes.

Risk for heart disease for both men and women:

Ischaemia in the setting of no obstructive coronary artery disease (INOCA) is associated with coronary microvascular dysfunction and adverse cardiac outcomes. More common in women, INOCA may explain the difference in heart attack symptoms and complicates the diagnosis and treatment of CVD. For example, if a cardiac catheterisation is the gold standard for diagnosis of CVD, but women have INOCA then some may be wrongly categorised as having no significant disease. Without using criteria that accounts for the impact of sex and gender, blood tests such as troponin may lead to patients wrongly “ruled out” from having CVD.

While both men and women may have chest pain when having a myocardial infarction, women are more likely to have ischaemia without “typical” chest pain symptoms and are more likely to face mortality without this traditional presentation (Canto et al. 2012). We need to reclassify “typical and atypical” presentations of CVD as this terminology contributes to bias that may lead to incorrect diagnoses. Instead, the development of guidelines and criteria that are sex and gender-specific will improve diagnosis and treatment options, and with increased recognition, we can decrease the mortality from CVD in women.

Mental and physical stress, whether experienced early or later in life, is increasingly recognised as significantly influencing the development of chronic diseases. Studies available show that the correlation between stress and CVD risk do not treat the sexes equally. Investigating the effect of socioeconomic status in puberty, a sub-study of the Ovarian Aging Study found that lower socioeconomic status for women in puberty correlated with lower levels of sex hormone-binding globulin (SHBG). SHBG is derived from an index of bioavailable testosterone, and is related to CVD associated hormone profiles (Bleil et al. 2015). Therefore, women that experienced lower socioeconomic status (SES), and the stressors that come with it, have a greater risk for CVD as they age from pubescence into adulthood. In a model by Miller, stress associated with lower SES early on in life heightens the response of macrophages and monocytes, creating a state of chronic inflammation. This inflammation, along with genetic susceptibility, can lead to chronic diseases such as chronic heart disease (Miller et al. 2011). In a study of the prevalence of Adverse Childhood Events (ACEs) over 23 states between 2011-2014, the mean score of ACEs was higher for women than in men, and was higher for multiracial communities than other races (Merrick et al. 2018). Women report experiencing adverse events in childhood more than men and these adverse events and stressors can lead to higher risks for CVD as they reach adulthood. These additional risk factors for women should heighten our awareness of the potential for CVD. Limited studies have purposefully looked into sex-related correlations on stress and cardiovascular risk, further qualifying the need for such research (Murphy & Loria 2017).

In a perspective from Murphy, there is substantial evidence pointing to several psychosocial disadvantages impacting young women, and this condition will most likely affect the metabolic and CVD risk in the next generation (Murphy & Loria 2017). 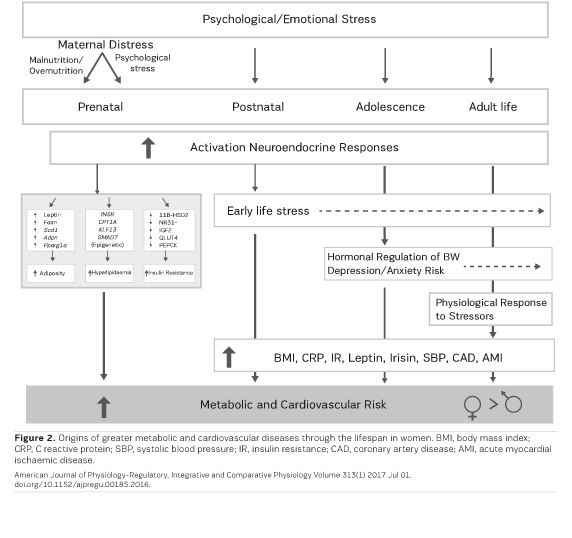 The overall decline in death from CVD between 1979 and 2010 can be correlated to the use of evidence-based strategies and implementation of guidelines that decrease risk factors. With increasing rates of death from CVD since 2010, where are the evidenced-based guidelines that take sex and gender into consideration? Including the impact of sex and gender in the development of diagnostic algorithms and treatment options could change the upward trend of mortality in CVD. We must have research that includes the differences in presentations and risk factors for both men and women. In 2014, the NIH released a policy requiring all preclinical research to include sex as a biological variable, and to require adequate justification to only study one sex.
Policy is helpful; however, we must have implementation in research and medical school curricula to ensure that the future generation of women is included in our definition of CVD. As we understand CVD differences due to sex and gender, we can tailor therapy, management, and preventive care to gain maximum use of medical care dollars and improve morbidity and mortality overall.

Miller GE, Chen E, Parker KJ (2011) Psychological stress in childhood and susceptibility to the chronic diseases of aging: moving toward a model of behavioral and biological mechanisms. Psychol Bull, 137(6): 959-997.

Summary: A presentation of a case study in light of the updated ESC guidelines on lipid control and new guidelines on diabetes... Read more

Educating Physicians to be Leaders

Summary: For the clinician leaders healthcare desperately needs, training has to begin in medical school and continue throughout... Read more

The Hospital as a Brand

Summary: The authors examine the process involved in creating a strong brand and the advantages that this can bring to an... Read more