Share
Download Article Back
Despite underlying physiological differences and a different set of risk factors, diagnosis, management, and treatment strategies for hypertension do not account for sex and gender variances.
Evidence-based guidelines for hypertension treatment from clinical trials are similar between males and females; however, most of these trials do not include any risk stratification of sex and gender (Wenger et al. 2018). Even from the start of medical education, students are taught a single set of risk factors and treatments to be applied to both sexes despite any underlying physiologic differences. The Center for Disease Control (CDC) estimates that 1 in 3 people have hypertension, and with half the population being female, the impact of not accounting for sex and gender variances can lead to poorer quality of care and worse outcomes.

Risk Factors: How Important are the Sex and Gender Differences?

Although hypertension becomes more prevalent with age in both males and females, the timeframe of onset is unique for each. Hypertension rates in premenopausal women are lower when compared to men of the same age cohort (Muiesan et al. 2016) whereas, after age 50, women have a higher rate of hypertension than men (Benjamin et al. 2018). Regardless of gender, all people with hypertension are at an increased risk of developing cardiovascular disease (CVD). The differences, however, fall within the risk factor profile. For example, men tend to have the more traditional risk factors whereas women often will present with less traditional risk factors (Tziomalos et al. 2014).

In females, onset of menopause is associated with a 2-fold increase in the risk of HTN and increased cardiovascular risk (Barton and Meyer 2009). Blood pressure levels at this time depend on age and duration of menopause, suggesting oestrogen deficiency to be a contributing factor. After a woman undergoes menopause, she is found to have an elevated BMI as compared to before, as well as abnormal glucose metabolism (Nuzzo et al. 2010). These sex-related factors may contribute to the development of metabolic syndrome, which in turn leads to an elevated blood pressure and increased risk of CVD.
There are currently multiple hypotheses regarding why women have a unique set of risk factors for hypertension compared to men, the first of which involves the role of female sex hormones. While a female is premenopausal, she is benefiting from oestrogen’s protective effects. Oestrogen has been found to activate nitric oxide, leading to inhibition of the sympathetic system, thus causing vasodilation (Samad et al. 2008). Women have more arterial oestrogen receptors than men, and a premenopausal woman, who has the highest level of oestrogen production, is able to most benefit from the vascular effect (Tadic et al. 2019). 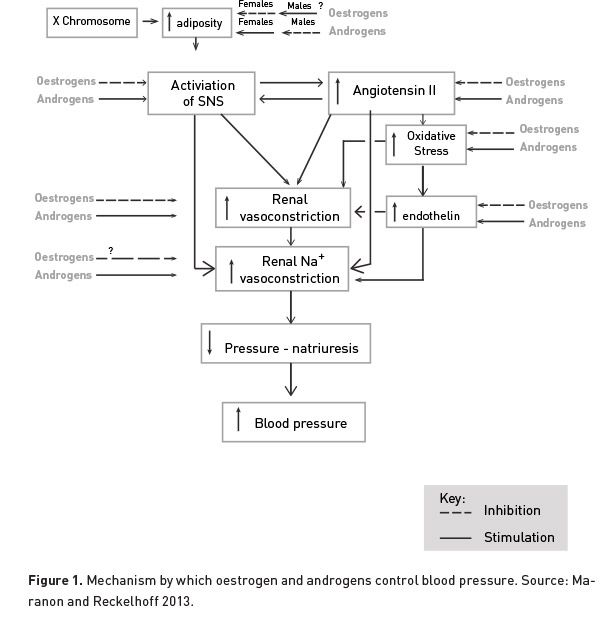 A second hypothesis regarding female-specific pathophysiology of hypertension suggests that a greater anti-inflammatory immune profile in women with hypertension may be a compensatory mechanism to limit increases in blood pressure. Evidence shows that ovarian hormones can reduce plasma renin levels and ACE activity, thus leading to decreased angiotensin 2 levels. Angiotensin type 2 receptors, which promote an anti-inflammatory profile, have greater activity in women (Lombardi et al. 2017).

Diagnosis and Treatment of Hypertension

Current guidelines in diagnosis of hypertension require multiple office visits with elevated blood pressure. Menopausal women often have more fluctuation in blood pressure measurements than men, which can lead to a lower likelihood of positive diagnosis (Kagitani et al. 2015). Despite the differences in risk factors, there is limited data regarding gender-specific screening strategies for hypertension.
The National Health and Nutrition Examination Survey (NHANES) from 1999-2011 showed a discrepancy of awareness and treatment of hypertension between gender. Young adults, particularly young males, were found to have poorer control of hypertension compared to all other age cohorts and age-matched females. The NHANES study estimated a difference of 28% of improved hypertension awareness, 60% difference in treatment for hypertension, and a 52% difference in control of blood pressure in younger women. The incongruity is hypothesised to be due to more frequent healthcare visits by young adult women versus age-compared men (Zhang and Moran 2017).
In November 2017, the American Heart Association published new recommendations for blood pressure control and treatment. These guidelines were based off the SBP Intervention Trial (SPRINT), a 2015 study that reported intensive blood pressure control was associated with lower all-cause mortality compared to standard blood pressure control in patients with high risk of CVD. The results of the SPRINT trial were eagerly awaited to aid in creating updated guidelines, but there have been significant critiques of the study and how broadly it can be applied. The average age of the participants was 70, and just about 30% of the participants were women (Wenger et al. 2016).
Treatment targets of hypertension are not gender-specific, and men and women generally demonstrate similar responses to medication. In women, thiazide-type diuretics are the preferred first-line therapy due to the additional benefit of protection from bone loss and hip fractures (Mosca et al. 2011). If there are any other known comorbidities, the patient should additionally be treated with a beta-blocker and an ACE inhibitor.
The side effect profile of antihypertensive drugs has been noted to vary between sexes. Women are 1.5-1.7 times more likely to develop side effects than men (August and Oparil 1999). With diuretic use, women are more likely to develop hyponatraemia, hypokalaemia, and arrhythmias. Women also more commonly develop ACE-inhibitor related cough and calcium-channel blocker-related peripheral oedema (August and Oparil 1999).
Physicians and researchers have previously considered the effectiveness of hormone therapy on blood pressure control. There have been multiple studies done with inconclusive results, some showing an improvement in BP control, some showing further increases and blood pressure, and some showing no effect.
REGARDS (Madsen et al. 2019) noted that increasing hypertension and incident ischaemic stroke was almost 2x more prevalent in women compared with men and suggested that blood pressure control and risk factor reduction utilise a sex-specific approach.

Comorbidities, Mortality, and Other Considerations

The leading cause of death in the United States is heart disease, and the primary modifiable risk factor for heart disease is hypertension. Although a larger percentage of men (24.4%) die from heart disease than women (22.3%), women are more likely to develop adverse consequences as a result of their hypertension (Arias et al. 2013). For each 10 mmHg increase in SBP in women, there is a 25% increased risk of developing CVD. In men, the risk is only increased by 15% (Wei et al. 2017).
A study that analysed blood pressure control rates among hypertensive women with CAD showed that women who had a prior MI or revascularisation procedure were at a higher risk for stroke, MI, and death (Sava et al. 2019). These women were also women with elevated blood pressures and also more likely to develop left ventricular hypertrophy, diastolic dysfunction, increased arterial stiffness, diabetes, stroke, and chronic kidney disease (Wenger et al. 2018).

Sex and gender are important facets of a patient’s healthcare experience. Although there are numerous similarities in risk factors and treatment between the sexes, there are gender-related differences in underlying physiology and pharmacokinetics, as well as social and environmental factors, that can affect clinical decision-making. Further research with an accurate representation of the general population is becoming more prominent, but without exploring these concepts with medical students, patients will not be receiving the best possible personalised care.

Closing the Cycle of Research, Prevention, Diagnosis, Monitoring, Treatment With a Finger Sensor

(I expert, I question, I answer)  Have you got something to say? Visit https://healthmanagement.org/blog/index or contact... Read more

How the Brain Works: Looking Inside to Target Treatments

Summary: Groundbreaking study at the University at Buffalo uses brain stimulation to assess how large-scale patterns of brain... Read more

A visionary radiologist explains how the European Society of Medical Imaging Informatics is bringing imaging and informatics... Read more

McKesson Corporation has announced that the McKesson board of directors... Read more