Encouraging health app use with seniors

Prevention, patient autonomy and use of digital goods

A digital health coaching platform offers sustainable support of the elderly population to improve their mental, emotional and physical fitness.
The German healthcare system is still one of the  best in the world. Nevertheless, for many years the contribution of healthcare to society has still largely been interpreted through the framework of cost reductions. increasingly, however, the willingness of the involved actors to improve healthcare in the sense of a holistic, patient-oriented understanding is growing. This is now being addressed in more and more social debates under the heading of “valuebased healthcare” (Porter 2010). Here, the quality of service provision is placed in relation to its costs and thus the so-called “value” of a health service for the individual is evaluated (Lehr et al. 2016).
Recently, support has also increasingly been given to measures in the field of prevention that make a value-oriented contribution to promoting self-help and patient autonomy (Landry 2015, Boulos 2011). This is reflected in the adoption of the German Prevention Act, which came into force in its essential parts on 25 July 2015, thereby increasing support for health self-help (Albrecht 2016). The German Social Code book V (§1) also states that health is the duty of every individual: “The insured are jointly responsible for their health; they should contribute to preventing the onset of illness and disability and to overcoming their consequences through a health-conscious lifestyle, early participation in preventive health measures and active participation in medical treatment and rehabilitation."
Value-based healthcare requires the cooperation and joint responsibility of all institutional and private actors involved in care. The human being, ie the consumer of the health service, is placed at the centre of attention. Thereby, more and more people want to actively commit themselves to their health. This can also be clearly felt in the healthcare market, as more and more essential impulses in the design of new health products emerge from the consumer side.  Consumers are more open to technological innovations than institutions which clearly sets them apart from most healthcare players. This openness also corresponds to a “cultural change towards a more sovereign and active shaping of one's own health actions” (Knöppler et al. 2016).
Consumers in the healthcare market are demanding digital goods, including those in the field of prevention (Figure 1). they are assigned to the so-called “second health market”. According to general understanding, the second health market comprises, in particular, over-the-counter medicines and individual health services, fitness and wellness, health tourism as well as, to some extent, sports, leisure, nutrition and housing. In addition, digital
goods are also becoming increasingly important as a preventive instrument in the first health market. The first health market comprises the area of “classical” healthcare, which is largely characterised by statutory health insurance and private health insurance, including long-term care insurance and to a lesser extent by employers (ie continued payment of wages in the event of illness), the state (ie contributions to health insurance) and other social service insurance institutions.

Overall, there are increasing efforts on the part of the players to assume the remuneration for digital goods for the insured (Albrecht 2016). Nevertheless, the sluggishness of institutional providers means that digital goods still play a subordinate role in the first health market compared to the second health market, which is why the dynamic development of digital health services has so far been observed predominantly in the second health market. Thereby, digital health applications (so-called "mHealth" range from simple solutions to complex medical applications. (Figure 2).

In view of the fact that the lifespan in Germany has increased by well over ten percent in the relatively short period of 40 years, due in part to medical progress and significantly better working, living and housing conditions, the market is set for steady growth in health apps. The proportion of people over 65 in the total population will rise from 21% today in 2030 to over 29%. According to the Federal Statistical Office, the number of people in Germany who are 65 years and older already amounts to almost 17 million. Nowhere else in Europe is this share as high as in Germany, at 20.6%.

The market development outlined above represents a great opportunity for innovative digital solutions such
as online platforms and health apps. Young people in particular are demanding digital goods in the form
of health apps, as these promise immediate positive effects on the improvement of their health. Increasingly, health apps are also experiencing increasing demand among senior citizens, as older people are becoming more technology-savvy and, for their part, interest in technology-supported health services is steadily increasing.
The elderly become ill more frequently and for longer periods of time and often suffer from several illnesses simultaneously. The psychological stress associated with this can promote the occurrence of depression. these include particular burdens such as fears of loss related to one's own identity, one's own professional role as a result of relinquishing a professional career, changes in family circumstances (eg when children leave home), independence and one's own life (ie the inevitability of one's own death). Cognitive abilities also change over the years.

People in old age are subject to strong changes, which require a high degree of change management. This and the associated physical and psychological challenges require completely new coping competences, which are adequately addressed by proVITALcoach through a holistic concept for the maintenance and improvement of mental, emotional and physical fitness. proVITALcoach sets itself the goal of enabling older people, their relatives and nursing staff to take effective measures and make necessary adjustments for the maintenance of the health of senior citizens. The extension of the so-called “health span,” ie the life span in good physical and
mental health, is particularly important. proVitaLcoach strives for this through the following measures:
• Building, maintaining and improving physical fitness and reducing over- and under-exertion
• Building, maintaining and improving mental and emotional fitness
The functional scope of proVITALcoach is aimed to be expanded by psychological components using current neuroscientific findings applied in the form of guided self-tests, checklists and tasks derived from them. Furthermore, for the extended version of proVITALcoach a superior coaching concept including a coaching guide will be developed. The objective here is to help people already in earlier age groups to actively shape ageing and to achieve a fulfilled life through a positive assessment and attitude towards ageing and the associated changes in their lives.
In addition, proVITALcoach addresses digital information exchange between the user of the application and an optional authorised person who looks after the user. The software including various coaching mechanisms will remind the user and help him to perform certain activities (eg taking medication, fitness exercises), thus supporting elderly people in their everyday life.

Relatives  according to a Bertelsmann study published in 2016 (Knöppler et al. 2016), proVITALcoach is assigned to the group of health services to promote indirect intervention and thus strengthen self-efficacy,
adherence and security. proVITALcoach is realised by means of an online platform in connection with a
health app. In addition to the intelligent technology, proVITALLcoach includes professional coaching(Figure 3). 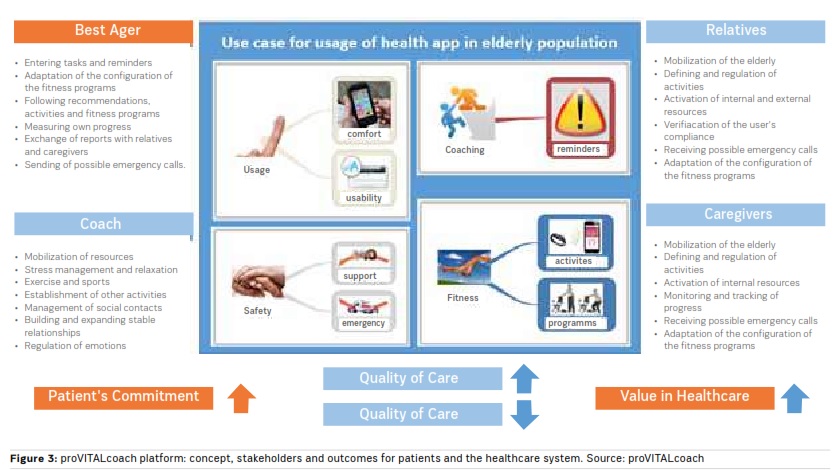 proVITALcoach addresses the following primary target groups:
• The elderly who take the initiative to contribute to their own health and fitness.
• Caregivers and family members who look after or care for elderly.
• Institutions (associations, nursing homes, retirement homes, other inpatient facilities,etc.).
The secondary target groups of proVITALcoach are:
• People with disabilities and chronic illnesses
• All fitness enthusiasts who value comfortable operation, coaching and safety.

proVITALcoach, a multifunctional personalised mobile health app positioned in the second healthcare market,
combines features and programmes developed by personal, fitness and health coaches to support best agers and their potential caregivers. The psychologically relevant content will be implemented in the form of guided self-tests and checklists and will be developed together with psychologists applying recent neuroscientific findings. Self-tests and checklists serve to assess the psychological health status of the user and to automatically develop a coaching concept using intelligence and tested rules. This serves as a basic of development of personalised tasks, memories and fitness programmes and thus extends the health app in the sense of holistic, value-oriented approach for the elderly population.
As part of the coaching concept, proVITALcoach will also develop a coaching guideline that will guide qualified coaches beyond the application of the health app to support the elderly in the challenges and opportunities of old age. The health app functions as a core technological element and will be sold individually as a digital good via an app store, as well as embedded in personal and/or media supported coaching. proVITALcoach thus contributes to increasing "value" by improving self-preventive measures for seniors, contributing to cost reductions in the healthcare system.
Caregivers can support their caregivers and family members their elderly relatives by creating appropriate compliance  tracking programmes. The primary focus on elderly users and caregivers allows them to truly focus on elderly unique needs of this generation and their families. dedicated “best agers” stay healthier and actively contribute to a higher “value" in healthcare. Elderly people who are not used to mobile technologies are encouraged by their children to get in touch and benefit from the solutions offered and their user-friendly applications.

Stringent dietary adjustments, albeit effective in delaying ageing, are not attractive to the majority of people. Thus, pharmaceuticals... Read more

Why embracing Artificial Intelligence is beneficial for all

In many ways Artificial Intelligence (AI) may seem like a new concept in healthcare, mainly due in part to the recent traction... Read more

Radiologists, more than any other medical specialty, feel the professional and emotional ‘whiplash’ that began five or so years... Read more

Blockchain and GDPR compliance for the healthcare industry

Blockchain and its application in healthcare  Read more