Stringent dietary adjustments, albeit effective in delaying ageing, are not attractive to the majority of people. Thus, pharmaceuticals or natural substances that mimic caloric restriction, like spermidine, are emerging as an alternative and feasible strategy to promote healthy ageing.

We are in an era of artificial intelligence, big data, and machine learning, where humans are living longer than ever before. However, this unprecedented life expectancy is not coinciding with a parallel increase in healthy life years. In fact, age-related chronic diseases, including cardiovascular and metabolic disorders, are on the rise worldwide. As such, an extended life span comes at the expense of disability and poor quality of life. Hence, medicines that specifically counteract the underlying mechanisms of premature health decline in ageing are urgently needed to alleviate the enormous burden of age-related diseases on public health and economies. As a result, geroscientists, ie scientists studying ageing and related diseases, have taken the quest to find effective interventions to reverse ageing. Actually, recent experimental discoveries of compounds that ostensibly mimic a healthy diet and tackle the world’s most common ailment - ageing itself - led to a growing belief that healthy ageing is within reach.

Caloric restriction promotes health and prolongs life: is it time to fast?

The impact of food on our health has been long recognised, not only with it being the source of energy and nutrients necessary for growth and development, but also as a remedy to treat diseases or even avoid them altogether. Almost every aspect of our feeding behaviour can profoundly affect both our health and the pace of ageing. This is true for diet composition, the amount of food consumed, the timing of meal intake during the day, and the duration of time between different meals. In this regard, dietary or caloric restriction – reduced food intake without malnutrition – is well known to promote health and extend lifespan in almost every tested organism, ranging from unicellular organisms to flies, mice, and monkeys. The startling benefits of caloric restriction are believed to be due to re-routing energy utilisation from growth towards cellular maintenance and repair processes. One such cell-protecting process is autophagy (the Greek word for ‘self-eating’), which is crucial for cellular homeostasis. Besides adaptation to stress, autophagy plays a key role in cellular housekeeping, whereby potentially toxic cellular components, such as damaged organelles and protein aggregates, are degraded, and the end-products serve as new building blocks for cellular recycling or can simply be used as a fuel for energy production (Abdellatif et al. 2018).

As we age, autophagic activity declines, leading to disproportionate accumulation of cellular waste. Furthermore, present-day dietary regimens repress autophagy, which naturally evolved as a cell survival process in ancient history when humans used to undergo prolonged periods of fasting during times of food searching or hunting. In contrast, nowadays we tend to suppress every hunger attack by overindulging in hyper-caloric foods, which inherently block autophagy. Accordingly, caloric restriction can counteract contemporary faulty feeding practices and, at least in part, re-establish normal autophagic activity. Autophagy, by restoring cellular fitness and homeostasis, can, in turn, improve health and possibly prevent age-related disease and may even protect from premature mortality. However, caloric restriction is still far from being a routinely used anti-ageing medical intervention for at least two reasons. Firstly, adhering to strict dietary regimens for extended periods is challenging and practically difficult to reinforce on a population level. Secondly, the efficacy and safety of long-term caloric restriction in the elderly is still to be established clinically amid concerns regarding its effect on aged subjects suffering from osteoporosis, infections or injuries, let alone chronic food abstinence in some enthusiastic individuals, which may cause malnutrition. That said, there is a great interest in developing other therapeutic and pharmacological interventions, which could mimic the metabolic effects and bring about many physiological benefits of caloric restriction without having to endure cumbersome dietary adjustments.

A promising alternative to caloric restriction is caloric restriction mimetics –compounds that induce autophagy without rigorous fasting periods or cutting down total daily caloric intake. One such caloric restriction mimetic is the polyamine spermidine (Madeo et al. 2018). Spermidine occurs naturally in every cell in our body and regulates some vital cellular functions, including protein synthesis as well as cell proliferation and differentiation. Amounts of spermidine, which decline with age, are affected by its biosynthesis and more importantly by food intake. Therefore, spermidine levels in different body tissues can be increased by a higher intake of spermidine-rich foods, such as wheat germ, soybeans, aged cheese, shitake mushrooms, green peas, nuts, apples, pears, and broccoli (Figure 1). Given that spermidine has the ability to activate autophagy in a similar fashion to caloric restriction, it is conceivable that spermidine could be used to treat, delay or maybe even prevent ageing and related disorders. 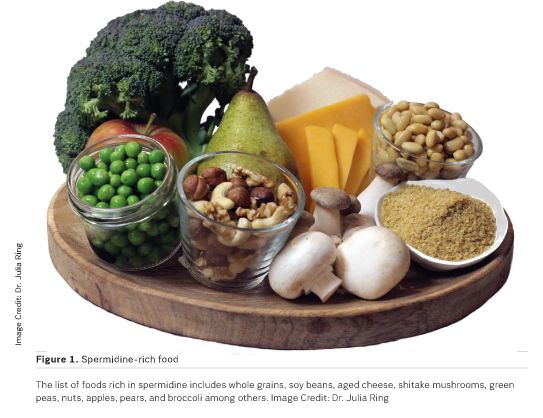 Cardioprotection and lifespan extension by spermidine

Growing experimental evidence supports the notion that spermidine has a great potential to be used as an effective anti-ageing compound. In fact, dietary supplementation of spermidine to aged mice prolongs their life by at least 10%, which could be increased to 15% or even 25% upon its life-long administration (Yue et al. 2017).
With ageing, both the heart and vasculature show signs of deterioration, including compromised functional reserve as well as myocardial and vascular stiffening. Consequently, ageing, especially when accompanied by other risk factors like obesity and hypertension, substantially increases the likelihood of cardiovascular disease. Given that the leading cause of mortality in humans is cardiovascular disease, spermidine-mediated lifespan extension was tested for possible cardiovascular improvements. Indeed, spermidine was found to turn back the ageing clock and improve cardiac health (Eisenberg et al. 2016). At the organ level, both cardiac structure and function were improved in spermidine-fed aged mice. At the cellular level, spermidine increased metabolic fitness by revitalising the function and restoring the structural integrity of mitochondria – the cellular powerhouse. As for the vasculature, spermidine feeding does not only reduce vascular stiffness in aged mice (LaRocca et al. 2013), but also delays the development of hypertension in salt-sensitive rats, which were protected from hypertensive cardiac and renal disease. Remarkably, activation of autophagy was found to be a prerequisite for such extraordinary cardiovascular benefits of spermidine. Taken together, spermidine seems to mimic caloric restriction and extend lifespan, while protecting the circulatory system, at least, in preclinical testing (Figure 2). 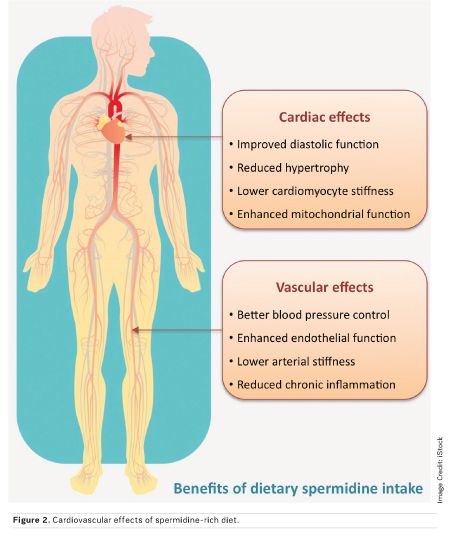 The relationship between ageing and spermidine intake in humans has been examined epidemiologically within the BRUNECK Study, in which a total of 829 individuals were recruited in Bruneck (South Tyrol, Italy) and followed up for 20 years (1995-2015). All participants underwent regular clinical evaluation, and their dietary spermidine intake was monitored by means of comprehensive food questionnaires under the guidance of specialised nutritionists (Kiechl et al. 2018). The study revealed that a higher intake of spermidine was associated with lower blood pressure and reduced risk of heart failure and other cardiovascular diseases (a composite of acute coronary artery disease, stroke, and vascular death). Furthermore, overall and cardiovascular-related mortality was reduced in those subjects consuming higher amounts of spermidine in their diet, even after correcting for possible confounding factors, such as caloric intake, age, sex, body mass index, diabetes, hypertension, physical activity, smoking, and alcohol consumption. More recently, the safety of spermidine administration to the elderly was examined in a pilot clinical trial recruiting patients with a subjective cognitive decline. Spermidine-rich plant extracts were well-tolerated by the patients and had a positive impact on memory performance (Wirth et al. 2018). Although these findings still await further validation in larger/more rigorous clinical trials, they collectively provide initial evidence for the potential therapeutic application of spermidine in the future.

The medical and socio-economic burden of ageing will continue to stimulate researchers to develop effective strategies that target ageing itself. The possibility that a simple and natural molecule like spermidine, could have profound health-promoting effects and may even promote longevity without the need for radical adjustments of feeding behaviour is quite captivating and extremely encouraging. That being said, the upcoming years will reveal whether spermidine and other caloric restriction mimetics are suitable remedies for clinical use. Until then, eating a few more nuts wouldn’t do any harm nonetheless.

The authors acknowledge support from the Austrian Science Fund (FWF) through the grants P27637-B28 and I3301-B31 (ERA-CVD, MINOTAUR).

Next Article: The role of social media in cardiology

Wirth M et al. (2018) The effect of spermidine on memory performance in older adults at risk for dementia: A randomized controlled trial. Cortex 109:181-188.

An overview of the application of personalised medicine in cardiology and the potential benefits it offers for improved cardiovascular... Read more

Implementation and integration challenges Over the last few years, we have seen a rapid rise in the popularity of Artificial... Read more

AI-based prediction in clinical settings: can we trust it?

AI is proving its worth in delirium prediction   An AI model used for prediction and prevention of delirium in elderly... Read more