Sex and gender in medicine

Healthcare has not been immune to the gender gap, but the implications go deeper than one would expect.

Biological differences between males and females have a profound impact on how we approach their healthcare needs in terms of pathophysiology and treatment for a vast array of diseases. However, health education and research currently do not adequately highlight these differences. Sex and gender are an essential aspect of precision health, where every cell has a sex and can influence pathophysiology and gender is reflective of environmental factors. Understanding both leads to optimal treatment and is essential to a better understanding of the disease process.

A person’s sex is genetically influenced and, based on external genitalia, is usually assigned when born. Gender refers to an individual’s socialisation leading to both identity and expression and has a much broader expanse of possibilities. Understanding these differences, summarised pictographically by the Canadian Institutes of Health Research in Figure 1, is essential as we strive for more individualised patient care and an increased knowledge of health and disease. 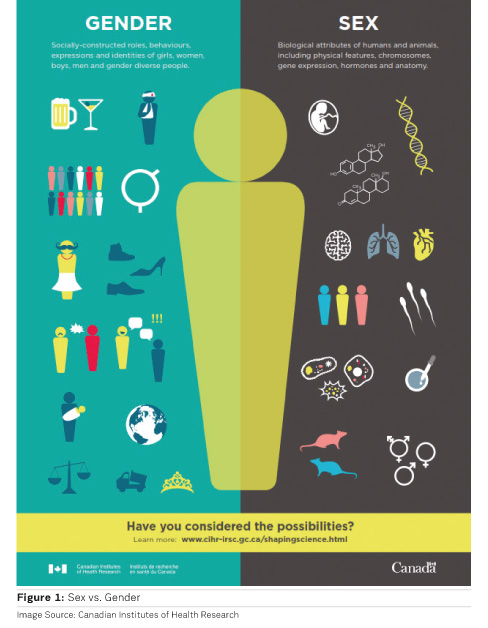 Research has been wildly behind in understanding the differences between sex and gender. This is evident even starting at the preclinical phases of clinical trials, which tests drugs on non-human subjects. A review article looked at sex bias in research on mammals in 10 biological fields and found that a male bias was noted in 8 disciplines. This was most prominent in neuroscience, with single-sex studies of males occurring 5.5 times more often than females (Beery and Zucker 2010). An underlying foundation of excluding females has been that females have more biologic variables, particularly with hormone cycles and pregnancy, which can create more confounding variables and make data analysis more difficult.

However, it is essential that we address these variables so that we can ensure that this data is applicable to human females when clinical trials progress to further phases. For example, women are diagnosed with anxiety disorders 2.25 times more often than men, but most animal studies on pharmacology for anxiety are done on male rats. Similar trends have been noted in other studies discussing strokes, multiple sclerosis, and pain (Beery and Zucker 2010).

Even in human articles, as evidenced by Figure 2, we can see a clear bias for male subjects in almost every field, except three: reproduction, endocrinology, and behaviour physiology. This perpetuates the idea that female subjects are only relevant when determining reproductive value and analysing hormonal differences (Beery and Zucker 2010). 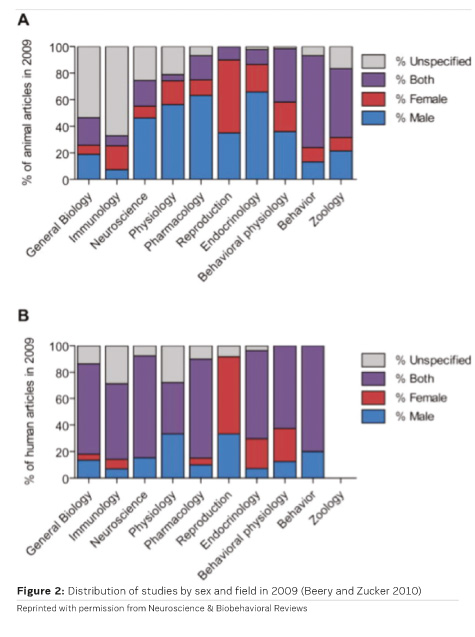 The gender imbalance in healthcare is mostly at the leadership level. Up to 80% of those that provide healthcare are women, but only 3-9% actually make it into leadership positions. This lack of women in leadership may be due to unconscious bias and outdated societal stereotypes and has a negative influence on patient outcomes (Rotenstein 2018).

Rock Health, a venture fund that has been surveying women about gender diversity since 2012, has noted that the percentage of women on healthcare executive teams and boards has remained stable since 2015 (Tecco and Huang 2018). These findings, shown in Table 1, make it clear that the fight for gender equality is still pervasive even within the medical field, which in turn, has made it more difficult to push for the attention to gender gaps in medical knowledge. It’s essential that women play a central role on these boards so that more diverse ideas and suggestions about how research and medical practice can be put forth and older notions can be challenged. 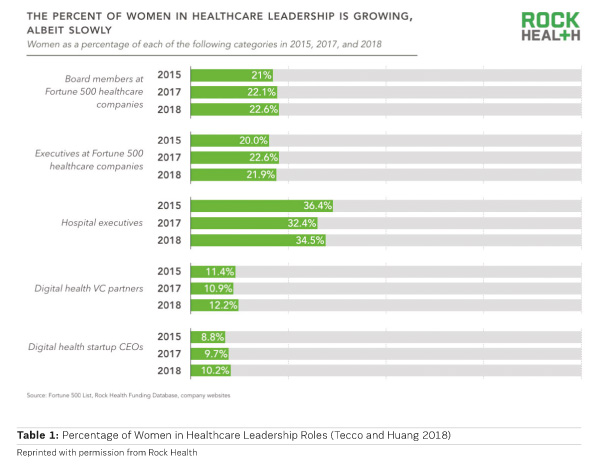 It has been shown in corporations that with increase in diversity at the senior leadership level, there is a reported increase of up to 74% more in equity and assets. Recognising that high performing women physicians are less likely to stay in an organisation where they perceive a glass ceiling and the cost for decreased physician engagement and increased burnout should lead the health care industry to work on mechanisms for promoting more women into traditionally male-dominated leadership roles (Kimball 2015).

Lives could be saved by evaluating the differences, not only in the disease process but in the management provided by physicians. In a study by Tsugawa, there was a decrease in mortality for Medicare patients cared for by female physicians (Tsugawa 2017). Interestingly though, female physicians score lower in patient satisfaction scores than their male colleagues as reported by Sotto (Sotto-Santiago 2019). Just as in understanding what the drivers are for differences in disease states, we should learn what female physicians are doing differently that may increase care quality (Tecco 2018).

In a survey conducted by the American Medical Women’s Association (AMWA) between September 2004 and June 2005, students were asked to rank the extent of how certain topics across several disciplines were included in their curriculum and how prepared they were in certain clinical skills. The most frequently mentioned topics students would have liked to see more of, included abortion and contraception (42%), sex/gender-specific information on any topic (20%), and rape and domestic violence (20%). Other highly-ranked topics included female sexuality, sexual orientation, and gender identification, and adolescent girls’ issues. Furthermore, some students commented about how there are also deficiencies in many aspects of male healthcare, and some of the survey topics were not addressed in men. A couple of students also commented on how women’s healthcare topics were isolated when they should be approached with a balance between both sexes.

This information suggests that not only do medical schools not spend enough time addressing gender disparities in healthcare, but also students actually want to know more about these topics. It is no secret that each new generation has an increased awareness and personal connections to problems such as the ones mentioned above. However, physicians continue to lack serious training in addressing these topics at any level. These conversations are never easy, and that makes it essential to start talking about how to approach patients with sensitive subjects early on in medical training to make it a more empathetic process. Furthermore, physicians also should be aware of what resources exist at their institutions to help support patients for long-term healthcare impacts that will persist beyond their first visit.

So where do we go from here?

Research focusing on both human male and female participants has been increasingly emphasised and has improved over the past few decades, especially with pressure from national and international organisations to do so. However, while the sex bias has a relatively easy fix, addressing gender bias has its own sets of limitations. How do we measure gender when it exists on a spectrum of possibilities? With the ever-changing landscape on how we view gender, how do we attempt to avoid stereotypes and come up with an unbiased scale?

Furthermore, how do we analyse the intersection of sex and gender to understand how to individualise therapy? These questions certainly have no easy solution, but it is important to start the conversation and push for a solution through greater inclusion of women as leaders and addressing the gender inequality at every level of medical training.

«« How Culturally-Sensitive Care Can Improve Your Bottom Line


No trust, no digitalisation »»

Canadian Institutes of Health Research. Have you considered the possibilities? Available from cihr-irsc.gc.ca/e/documents/igh_s17_infographic_gender_sex-en.pdf.

Tecco H, Huang M (2018) What 600 women told us about working in healthcare in 2018. Rock Health. Available from rockhealth.com/reports/women-in-healthcare-2018/.

Summary: Modern nursing is a multi-layered field of work with increasing work density and complexity, which requires a high... Read more

Lions Health 2019 has offered new insights and discussions on how creativity is being embraced by the healthcare industry.... Read more

The two-day forum presents its 2019 themes   Lions Health focuses on the creation, conception and execution of awe-inspiring... Read more

A leadership model for the health care sector   In medical institutions, leaders are required to ensure, through delegation... Read more

Providing excellent care inside and outside of the traditional hospital... Read more

An accomplished health care executive with more than 35 years of financial... Read more