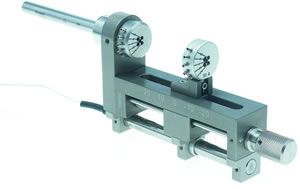 The MicroDrive is a fully developed, fourth generation device, used for positioning electrodes during stereotactic interventions. Up to 5 electrodes can be reloaded during the operation, so that the recording can start with a minimum number of electrodes. A resolution of 50 µm enables the operator to achieve precise positioning of the electrodes. Every full rotation, a haptic feedback is given by the MicroDrive. When using the optional depth sensor, the stereotactic position of the electrodes is transferred and recorded automatically in the ISIS MER system. The MicroDrive and the accessories are autoclavable at 134°C. The MicroDrive may also be used independently of the recording system and is adaptable to all common stereotactic systems. The MicroDrive can be used to target point localisation by micro electrode recording and deep brain stimulation, implantation of Medtronic and St. Jude DBS electrodes, evaluation and localisation of the target area during lesions, and more.
a:1:{i:0;a:2:{s:4:"name";s:8:"Options:";s:3:"val";s:28:"for stereotactic stimulation";}}
× × × × × × × × × ×
[email protected]
Im Hausgrün 29,
79312 Emmendingen
× × × × × × ×