Ultrasound color flow mapping (CFM) has been extensively used in clinical diagnosis. Velocity of blood flow is calculated through a leg-one auto-correlation [1] method using the beamformed and filtered receiving signals. The magnitude of velocity relative to the direction of ultrasound beam propagation can be obtained and thus is applicable to detecting a laminar flow, which is widespread in the human blood circulatory system. A typical instance can be found in the carotid artery, where the flow pattern is close to a parabolic profile. The maximum velocity can be calculated by an angle correction for the measured value. Similarly, the laminar flow is also found in some fairly large and straight arteries, such as the femoral artery, cerebral artery, brachial artery, and abdominal aortic artery, as well as a number of veins. A maximum blood velocity at peak systole associated with spectral Doppler analysis and a high resolution B-mode image can usually be employed to diagnose arterial plaques [2, 3].
However, not only the laminar flow, but also a more complicated flow can be discovered in some bifurcations or bended vessels, such as carotid bifurcation and bulb. Some studies [4-6] have shown that formation and growth of arterial plaques is particularly prone to taking place in a vessel with a complicated shape, where a vortex flow can be found. Such complex flows cannot be detected by conventional CFM as it only measures a one-dimensional velocity. Moreover, the laminar flow will completely change even in a long and straight vessel when the flow is blocked by a plaque. Investigation of blood flow, particularly in pathological or curved vessels, requires an advanced flow-measuring method, where both the absolute magnitude of the velocity and the flow direction should be obtained for an optimal diagnosis.
In our new generation device, a novel ultrasound-based technology called V Flow will be demonstrated that can dynamically visualize the blood flow , avoiding the inconvenience of angiography. Rather than a series of static images, the fluidity will be displayed with dynamic arrows indicating the flow process. Both the magnitude and direction of the flow can be measured at any location in the vessel.

In conventional color Doppler imaging, ultrasound beams are emitted into the region of interest (ROI). One color image line requires multiple transmissions since the velocity has to be estimated using as many samples as possible to increase the accuracy. The number of samples used is called the ensemble size and is usually 8 to 16, with a compromise of accuracy and frame rate. One image contains a number of image lines and each color line needs many emissions. Thus, the frame rate of a color Doppler image is decreased by a factor of ensemble size compared to a normal gray-scale B-mode image.
By increasing the pulse repetition frequency (PRF), the frame rate of the color Doppler image can be increased. this also increases the maximum detectable velocity and reduces the aliasing problem. However, the PRF is also restricted to the maximum scanning depth as there has to be enough time for a round trip of the waves. For example, examination of a common carotid artery requires an image display with a depth of 4 to 5 cm. The maximum PRF is then around 15KHz, which is calculated by PRF = 1/(DepthX2/c), where c is sound speed with an average of 1540m/s in human tissue.If the ensemble size is 10, then the frame rate will be around 15 Hz for an image with 100 lines. This process is also illustrated in Fig. 1. The temporal resolution is low for some arteries with high velocities such as the carotid artery, particulary when there is a stenosis. Another drawback is that the time interval for line-by-line scanning is extremely long for the color Doppler imaging due to multiple transmissions of one lines. This results in an asynchronous display of a color image since each image line denotes the velocity at a different time.
To increase the frame rate and reduce the time difference among images lines, multiple images lines should be beamformed at one transmission. This is the major limitation for a conventional ultrasound platform as it requires  ahuge amount of data to be processed in very short time. In our new ultrasound system, a much more powerful and newly structured platform with an extremely high frequency is used, and is very flexible due to the availability of arbitrary beamforming methods. Therefore, multiple image lines will be obtained after a single transmission, and continuous Doppler transmission can be achieved, avoiding a transient state, and thus continuous filtering can be applied for removing clutter.
To derive the direction of velocity of flow at any location, multi-directional transmissions and receptions are employed as shown in Fig. 2, and then a true velocity with accurate direction can be calculated by an angle-compounding technology as shown in Fig. 3, which shows an example where compounding and regression analysis of two angles is applied giving more angles, resulting in an over-determined system. The velocities at any location are obtained as long as the area is scanned by the multi-directional beams. The focused beam is transmitted alternatively and used to generate B-mode image lines. The interleaved transmission ensure both a highly sensitive vector flow image and a high-resolution B-mode image.

In order to demonstrate the blood flow more intuitively, an innovative display has been developed. The velocity at arbitrary location within the ROI can be derived at each time instance and thus the fluidity of particles such as red blood cells in a vessel can be illustrated by continuously updating their position according to the calculated velocity as shown in Fig. 4. In this system colored arrows are used to present both velocity and direction of flow. The length of the arrow also denotes the velocity. The measured results can be displayed slower than real-time with an ultra-high frame rate up to over 400 Hz, so complex flow patterns with an extremely high velocity can be captured. Snapshots for flows such as laminar, turbulent, secondary, vortex and contra flows can be demonstrated intuitively in this unique imaging technology, an integral part of the ultrasound diagnostic V flow system.

The manual guide Fig. 5 demonstrates the manipulation of V Flow. A linear probe L11-3U should be used for V Flow. Choosing "carotid" as test mode will show "V Flow" on the control. Each square box in Fig. 5 denotes a main manipulation. each of which has a series of sub manipulations:
In each manipulation, the machine status is denoted 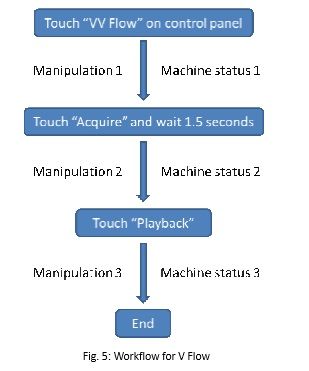 V Flow has been applied to different types of flow in the carotid artery to find any difference in comparison to the conventional CFM method.
Case 1. Laminar flow in the flat carotid artery as shown in Fig.6 - No angle steering for CFM
When the carotid artery is almost parallel to the probe surface and no angle steering is manipulated, the conventional CFM gives a corrupted images and does not indicate the flow direction. In the same condition, V Flow clearly and explicitly shows the blood flow because it is not Doppler-angle dependent. This totally different from conventional Doppler which is highly constrained by the Doppler angle. 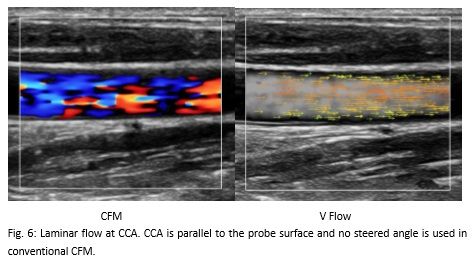 Case 2. Laminar flow in the flat carotid artery as shown in Fig. 7 - Angle steering for CFM
When the carotid artery is almost parallel to the probe surface and Doppler angle is steered, conventional CFM shows a uniform forward flow towards the probe. The laminar flow profile cannot be interpreted. In contrast V Flow not only indicates the flow direction with intuitive arrows, but also represents the character of laminar flow, indicating fast flow in the center and slow flow near the vessel wall. 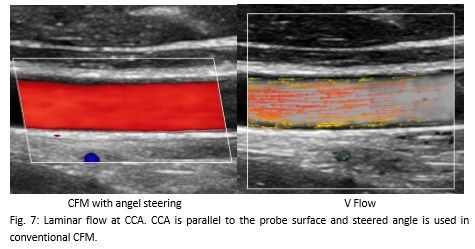 Case 3. Laminar flow in the angled carotid artery as shown in Fig. 8
When the carotid artery is angled from the probe surface, sometimes the blue color appears within the red color. Is that reverse flow? V flow reveals the secret. The blue color area is easily explained with V flow, where part of the flow shifts with a certain angle. Conventional CFM mistakenly interprets it as a reverse flow, which is incorrect 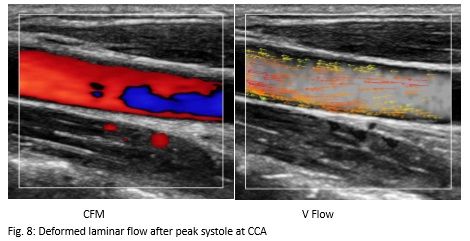 The paper presented a novel visualization for human blood flow, in which color arrows are displayed, instead of the color map of a conventional Doppler ultrasound image. The color arrows show both the velocity and direction of the flow, which is also dynamically and intuitively demonstrated when the video is displayed.  Clinical results are showing that the new method gives much more detail with different types of flow in the carotid artery compared to conventional CFM. Further extensive clinical research will highlight the real clinical value of using V Flow, and will open new ways for investigation of the pathologies of vessels.

Thanks to its continuing effort in innovations, Mindray is proud to introduce a new breakthrough in speckle reduction called... Read more

Moving From 2D to 3D Ultrasound : The Ease of the Transition is in the User Interface