Central nervous system (CNS) malformations are one of the most common congenital abnormalities. Ultrasound has been used for nearly 30 years as the major imaging modality to help diagnose fetal CNS anomalies [1]. Currently, the standard 2D planes used for ultrasound assessment of the central nervous system in fetuses include the Trans-Cerebellar Plane (TCP), the Trans-Thalamic Plane (TTP), and the Trans-Ventricular Plane (TVP). However, with the use of 3D, the acquisition of the Median or Mid-Sagittal Plane (MSP) adds a new and very clinically useful perspective.
The orientation of the Mid-Sagittal Plane provides a unique view of the intracranial structures such as the corpus callosum (CC) and an axial view of the cerebellar vermis (CV). Several studies[2~8] have proven that the observation from the MSP is critical for the clinical diagnosis of Agenesis of the Corpus Callosum(ACC) and Dandy-Walker Syndrome. Unfortunately, due to the various imaging conditions such as poor fetal position, acoustic shadowing, and operators’ scanning skills [5], the MSP is particularly difficult to obtain from a 2D ultrasound. Xie et al[6] showed that a successful acquisition of the MSP from 2D ultrasound is only about 35.5%. Because of the low acquisition rate of MSP in 2D scans, clinicians can only conduct indirect examination based on several transverse planes of the fetal brain in many cases, leading to a high rate of misdiagnosis of the CC or CV related diseases.
TCP, TTP, and TVP are the most critical planes in a fetal CNS examination. The anatomic landmarks in these planes include the cavum septi pellucidi (CSP), thalami, cerebellum, cisterna magna, and lateral ventricles. In addition to observing the morphology of these structures, measurements of this anatomy is also important to prenatal ultrasonography. The standard measurements of the fetal head include the head circumference (HC), biparietal diameter (BPD), and occipitofrontal diameter (OFD) from the TTP. The width of the cisterna magna (CM) and transcerebellar diameter (TCD) are obtained from the TCP and the width of the lateral ventricles (LVW) from the TVP.
Currently, the common workflow used to acquire these standard images with measurements is a physically demanding and time consuming process. The sonographer must image each of the required transverse planes individually and make the measurements on the appropriate anatomy manually. This can be challenging since some of the views can be difficult if not impossible to acquire in 2D, such as the MSP, and the measurements are user dependent which can be subjective and inconsistent. The constant manipulation of the transducer over extended periods of time has been proven to increase the possibility of developing Repetitive Stress Injuries.
Today, 3D ultrasound has been widely accepted for fetal imaging and the major advantage is the ability to obtain many views from one volumetric dataset. However, many physicians have not yet adopted the use of 3D acquisition in practice due to a lack of knowledge required for 3D acquisition versus 2D imaging, the difficulty in recognizing some views of the anatomy from a totally unfamiliar display such as the C Plane, and the need to learn new methods for rotating, translating, and manipulating the 3D volumes which can be very daunting and time consuming initially. For example, according to a recent report [7], for a skilled sonographer to manually acquire the MSP it usually takes between 65~186s with the average time being 90.7±8.6s.
Therefore, a faster and more user friendly method to automatically display the standard planes with the required measurements in a fetal CNS examination could significantly boost both the quality and efficiency of clinical diagnosis.

In order to acquire the standard planes and the regular measurements in the fetal brain fast and accurately, Mindray has developed an innovative software tool named Smart Planes (available on the DC-9 Ultrasound System) to detect the MSP, TCP, TTP, TVP and measure the BPD, OFD, HC, TCD, CM, and LVW automatically.
The workflow of Smart Planes is as follows (Fig1):

If the user is not satisfied with the automatic results, the planes can be manually adjusted by translating or rotating the X, Y, Z knobs on the control panel and/or the measurements can be modified by selecting the Edit button. It is worth noting that any changes of MSP’s location will also cause the redetection of the other three standard planes but modifications of any one of the transverse planes will not affect the other standard planes.
In addition to the regular biometric calculations, measurements of the Cerebellar Vermis and the Corpus Callosum can be obtained in the MSP. This information is essential in the diagnosis of CV and CC related diseases. Vinals F et al. [2] proposed a relevant curve between CV related measurements and gestational age from the statistics of a large number of clinical data. If necessary, users may refer to this paper to evaluate whether the measured values are normal or not.

Machine Learning, a field of computer science, allows for the construction of computer algorithms that can learn from and make predictions on data. Learning-based detection is an innovative methodology in medical image analysis that applies the theories of machine learning and pattern recognition to detect interested anatomic structures. The basic idea of learning-based detection is to simulate the visual recognition process of a human by automatically selecting the appropriate features from the training dataset and further constructing the mathematical model to distinguish the attribution of input samples.
For Smart Planes, the training dataset consisted of over 5000 images of the general standard planes in fetal CNS (i.e., MSP, TCP, TVP, and TTP) that contain important anatomical structures (i.e., cerebellum, cavum septi pellucidi, corpus callosum, lateral ventricle and so on). The image features were first extracted using advanced image processing algorithms and then further applied to the training/learning algorithms to generate the final detection model. Based on the trained detection model, Smart Planes can automatically provide the likelihood of the input plane being one of the standard planes (MSP/TCP/TVP/TTP).
In volumetric geometry, an image plane in 3D ultrasound data is given by:
ρ=cosƟ cosɸX+ sinƟ cosɸY+sinɸZ
The algorithmic goal of Smart Planes is to calculate the appropriate parameters [ρ,θ,ϕ] that generates a target plane that fits the detection model best.
Fig.2 shows the workflow of standard plane detection. The optimal standard plane is detected based on the features learned from positive and negative samples. In practice, MSP is first detected and the transverse planes (TCP, TTP, and TVP) are searched along the direction perpendicular to MSP. The search strategy is based on human anatomy which can both save the computational time and improve the robustness of detection. 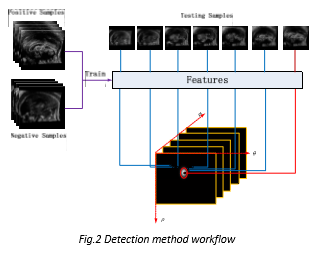 Some typical case studies are as follows:
Case 1: Normal case
GA:25W3D   Age:31
A normal case is shown in Fig. 3. Quadrant A shows the image of TCP that includes CSP, thalami, cerebellum and cisterna magna. Quadrant B shows the image of TTP which includes CSP, thalami and hippocampal gyruses. Quadrant C shows the image of MSP which includes CSP, corpus callosum and cerebellar vermis. Meanwhile, three reference lines of different colors are visualized in MSP to show the projection position of each standard transverse plane (TCP, TTP, and TVP) relative to MSP. Quadrant-D shows the image of TVP which includes lateral ventricles and CSP. In addition to time-saving, another advantage of Smart Planes is that one can observe anatomical structures in different planes which may provide more information and confidence of diagnosis. For example, observation of both MSP and TCP can assist the user to better understand the full view of the cerebellar vermis, which is often helpful in the diagnosis of Dandy-Walker Syndrome. 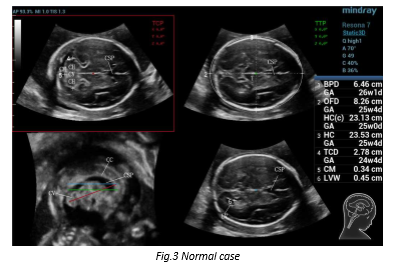 Case 2:  Partial Agenesis of the Corpus Callosum (ACC)
GA:24w0D  Age:32
A partial ACC is shown in Fig. 4. The cavum septi pellucidi is very small and the length of corpus callosum is very short (MSP in Fig.4A). Moreover, this case is accompanied with dilation of the bilateral ventricles (TVP in Fig.4A). MRI confirms these findings (Fig.4B).

Case 4: Dandy-Walker Syndrome and ACC
GA:24W0D    Age:32
A fetus with both Dandy-Walker Syndrome and ACC is shown in Fig. 6. The size of the cerebellar vermis is smaller than normal and the shape of the cerebellum is different from the norm (MSP, TCP in Fig.6 A). What's more, the cavum septi pellucidi is very small and the length of corpus callosum is very short (MSP in Fig.6A). MRI confirms these findings (Fig.6B).

Case 5: Misdiagnosis as Dandy-Walker Syndrome in 2D - Diagnosed Correctly from Smart Planes
GA :24w0D  Age:33
Fig. 7 shows a case which was misdiagnosed as Dandy-Walker Syndrome from 2D ultrasound in another hospital. After acquiring the MSP using Smart Planes in Shenzhen People’s Hospital, the cerebellar vermis was found and the size was normal, which means the fetal vermis was indeed normal (MSP, TCP in Fig.7 A). The patient also had an MRI which confirmed the findings using Smart Planes (Fig.7 B).

Smart Planes acquisition requires correct positioning of the fetal head before beginning the 3D acquisition. The view of the fetal head is from the same view that the BPD is acquired in 2D. Specifically, the midline of the fetal brain relative to the horizontal cut plane of the ROI should be less than a 40° angle. The anatomical structures are best displayed when they are perpendicular to the ultrasound beam.
The ROI is positioned just above the anterior edge of the skull to just below the posterior edge of the skull (see Fig.8); however, the ROI size should not be too large as this will lead to a scan with too much unrelated information which may degrade the image resolution and the accuracy of detection.

The detection of the MSP is crucial because all the transverse plane detections are based on MSP. If the user is not satisfied with the MSP, the MSP can be adjusted manually and the TTP and TVP will be recalculated based on the new MSP.
During 3D acquisition, it is recommended to observe the 3D acquisition in process to ensure there is no acoustic shadowing in the scanning plane. Positioning the midline so the cerebellum is positioned more anteriorly can be effective in avoiding the acoustic shadowing from the petrous ridges.

Mindray provides a robust solution of the automated detection of the TCP, TTP, MSP, and TVP as well as the automated measurements of the BPD, OFD, HC, TCD, CM, and LVW for evaluation of the fetal central nervous system through Smart Planes. The methodology was specifically designed to enable the auto-detection of the 4 standard planes and the auto-calculation of the 6 regular measurements with both precision and speed (less than 1.5 second). The clinical trials have demonstrated Smart Planes can significantly simplify the process of fetal brain examination (20-30w) and assist doctors with an efficient and accurate diagnosis.

1.1 Background Ultrasound is a standard way to evaluate fetal anatomies. For the examination of fetal brain, one of the most... Read more

Fetal Brain , Imaging, Ultrasound, Mindray Central nervous system (CNS) malformations are one of the most common congenital abnormalities. Ultrasound has been used for nearly 30 years as the major imaging modality to help diagnose fetal CNS anomalies.