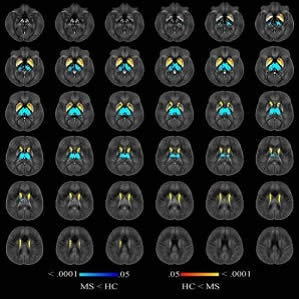 Share
Download PDF
Researchers have tested a new MRI technique, called quantitative susceptibility mapping (QSM), to track iron levels in the brains of multiple sclerosis patients. They found that brain iron levels can help identify those at a higher risk for developing physical disability, according to a new study published in the journal Radiology.
Multiple sclerosis (MS) is a disease that attacks three critical components of the central nervous system: the neurons (nerve fibres), myelin (the protective sheath around the neurons), and the cells that produce myelin. Common symptoms of MS include weakness, spasticity and pain. The disease can progress in many patients, leaving them severely disabled.
Brain atrophy is the current gold standard for predicting cognitive and physical decline in MS, but it has limitations, said study lead author Robert Zivadinov, MD, PhD, professor of neurology at the Jacobs School of Medicine and Biomedical Sciences at the University at Buffalo (UB). "Brain atrophy takes a long time to see," he pointed out. "We need an earlier measure of who will develop MS-related disability."
Iron is vital for various cellular functions in the brain, including myelination of neurons, and both iron overload and iron deficiencies can be harmful. In this study, the researchers compared brain iron levels in people with MS to those of a healthy control group using the highly accurate QSM technique. A brain region with more iron would have higher magnetic susceptibility, and one with less iron would have lower susceptibility. The mapping technique was performed on 600 MS patients, including 452 with early-stage disease and 148 whose disease had progressed.
Compared to 250 healthy control participants, MS patients had higher levels of iron in the basal ganglia, a group of structures deep in the brain that are central to movement. However, the MS patients had lower levels of iron in their thalamus, an important brain region that helps process sensory input by acting as a relay between certain brain structures and the spinal cord.
The lower iron content in the thalamus and higher iron content in other deep grey matter structures of people with MS were associated with longer disease duration, higher disability degree and disease progression, according to the research team. "Iron depletion or increase in several structures of the brain is an independent predictor of disability related to MS," Dr. Zivadinov said.
This association with clinical disability persisted even after adjusting for changes in the brain volumes of each individual structure.
The findings point to a potential role for quantitative susceptibility mapping in clinical trials of promising new drugs, Dr. Zivadinov noted. Current treatments involving anti-inflammatory drugs do not prevent MS patients from developing disability.
Source: Radiological Society of North America
Image Credit: RSNA


AI tools in radiology: who pays and how? »»

Paediatric head trauma is an important cause of morbidity and mortality in children and may be seen in the setting of accidental... Read more

A new study that will be presented next week during the annual meeting of the Radiological Society of North America (RSNA) shows... Read more

In a study presented at the annual meeting of the Radiological Society of North America (RSNA) in Chicago, researchers using... Read more

(2020-08-10 11:27)
I was diagnosed with multiple sclerosis in 2014 but had my first symptoms in 2012. both my legs were spasming mostly at night which made sleeping difficult. I tried Copaxone for about 5 years or so. The Copaxone causes joint pain, I have tried several types of medications but all made me sick. In 2019 I went to a care facility, life was too difficult at home for my husband and family. I was advised by one of the nurse at the care facility to try natural treatments, She introduced me to Mayaka Herbal Clinic, spoke to my husband about it and he went online to research, My husband read lots of positive reviews from other people who used the product from Mayaka Clinic, We decided to start me on the treatment. Its been 7 months since I completed the treatment, It has made a tremendous difference for me. all my symptoms including poor vision, pain, fatigue, and other symptoms stopped Visit RICH HERBAL GARDENS website ww w . richherbalgardens .com
Please login to leave a comment...

Some patients with COVID-19 are at higher risk of neurological complications... Read more

The COVID-19 pandemic puts much strain on healthcare resources. One... Read more