Share
Download PDF
Research on preterm brain development has focused on infants born less than 32 weeks into gestation (very preterm). An Australian investigation, results of which have been published online in Radiology, focused on preterm infants born between 32 weeks up to 37 weeks into gestation. Researchers used magnetic resonance imaging (MRI) to show that moderate and late preterm (MLPT) children are susceptible to interruptions of the rapid brain development which normally occurs toward the end of pregnancy. Developmental abnormalities can lead to long-term problems for prematurely born children.
Approximately 80 percent of preterm births involve MLPT babies, a figure which has risen over the past two decades. To address the lack of large-scale studies on brain development abnormalities, a team of researchers conducted an investigation of the problems associated with MLPT births, including reduced brain volume and brain injuries related to premature birth. The study was led by Jennifer M. Walsh, MBBCh, BAO, MRCPI from the Royal Women's Hospital in Australia.

Figure 2. (a) Sagittal T1-weighted image shows brain fronto-occipital distance (FOD). (b) corpus callosum (CC), anteroposterior distance (AP), genu, midbody (MB), splenium (SP) measurements.
Disruption of Developmental Trajectory
Dr. Walsh and her colleagues compared MRI scans of two groups of children: 199 MLPT infants and 50 term-born infants whose births occurred between 38 to 44 weeks of gestation. The team analysed differences in the size and maturation of several structures within the brain, and found an association between MLPT birth and smaller brain size at term-equivalent age.
Reduced brain volume was not the only disadvantage affiliated with middle to late preterm birth. Gyral folding was less mature in MLPT infants compared to full-term controls, leading to a decrease in the brain's surface area. Furthermore, myelination was less developed in one area of the brain. Myelination is crucial during brain development since it insulates some nerve fibres.
The team also searched the MRI scans for any signs of brain injury, since bleeding into the brain or inadequate blood flow can damage the brains of preterm babies. It is sometimes possible to detect the cause of an injury, such as oxygen starvation or nutritional deficits, although in many cases no clear explanation is apparent to account for the slowed brain development compared to infants who are not born early. Injury rates were found to be similar for the two groups of infants. 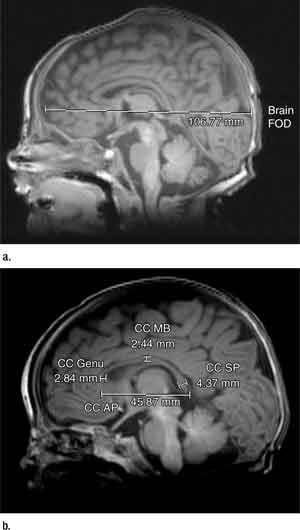 Figure 3. (a) Axial T2-weighted image shows deep gray nuclei (DGN) width, anteroposterior (AP) distance, and surface area. (b) Coronal T2- weighted image shows lateral ventricle atrial measures and transverse cerebellar diameter (TCD).
Treatment Will Depend Upon Continued Research
Brain growth is complex at any stage, but it is especially rapid during the last two months of pregnancy when neurons and other cells vital to normal function form and organise. The study's results indicate that births occurring during such a vulnerable period can have devastating developmental consequences. In contrast to babies born very prematurely, who are assisted by medications and early intervention to catch up with their full-term peers, less is known about the effects of such treatments on MLPT infants.
Additional research is planned, including an assessment of additional MRI data about brain function and structure. Follow-up of the infants in the study, though their later childhood years, will help scientists learn more about long-term outcomes for children born with brain abnormalities related to preterm birth. Until then, an understanding of what causes or contributes to the alterations in development is the first step toward designing treatment interventions to improve prognoses for MLPT infants.
Source: RSNA
Image Credit: RSNA
Figure 1. (a) Axial T2-weighted image shows brain and bone antero¬posterior distance (APD). (b) Coronal T2-weighted image shows brain and bone biparietal diameter (BPD), interhemispheric distance (IHD), right superior extra-axial distance (RSAD).

The levels of low radiation, which children with heart disease are exposed to during X-rays, does not increase their lifetime... Read more

A team of researchers has presented a study at the 2014 annual meeting of the Society of Nuclear Medicine and Molecular Imaging,... Read more

In a world premiere at this year’s annual meeting of the Society of Nuclear Medicine and Molecular Imaging, scientists have... Read more

Cloud Services for Enterprise Imaging Cost control, elasticity and scalability, and outsourced accountability for data security   Today’s modalities are creating images at an exponential rate – and the evolution from departmental to multi-specialty...

Changing views in Computed Tomography   For care providers, the pressure to cut expenses results in an ever-increasing need for standardization and precision medicine. The CT scanner SOMATOM Edge Plus provides diagnostic imaging at the appropriate...