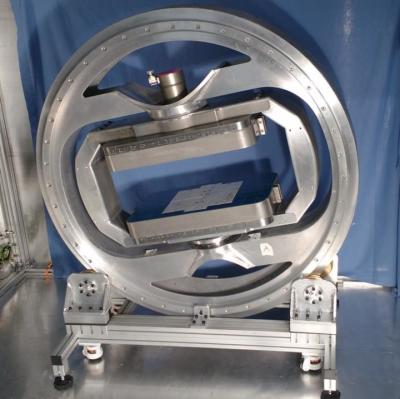 Share
Download PDF
Researchers from Imperial College London have developed a prototype for a ‘mini’ MRI scanner specifically to fit around a patient’s leg.

The proof-of-concept study, published in Magnetic Resonance in Medicine, used animal knees to test the technology which uses a specifically-designed magnet and rotates around an individual leg.

Knee injuries, such as those of the anterior cruciate ligament, affect millions of people and in particular women. These injuries tend to be common to the tendon, meniscus and the ligaments, however the difficulty in treatment comes from these areas not being visible on typical MRIs due to the water molecules. Dr. Karyn Chappell of Imperial’s  MSK Lab  explains how the ‘mini’ scanner utilises ‘magic angle’ technology to successfully view this area of the body.

The ‘magic angle’ effect is caused by the angle between the collagen fibres and the magnetic field which can alter the brightness of the images on an MRI. Dr. Chappell explains that by manipulating this angle, we can build a brighter, clearer picture of the knee and the injuries it may have.

This research was funded by the National Institute for Health Research. Human trials of the ‘mini’ scanner are hoping to start within the year.

The team behind the ‘mini’ scanner say that there is potential for this technology. As whilst the patient is sat, the scanner can rotate the leg and orientate magnetic fields in different directions, tackling the long wait times of typical MRI scans in hospitals. There is also the possibility that this could lead to use on other joints such as the ankles, wrists and elbows.

It has been highlighted that patients suffering from a concussion can have CT scans which show no irregularities and patients... Read more

A study of more than 135 million imaging exams, published in the Journal of the American Medical Association, has shown that... Read more

Can AI Read a Cardiac MRI Faster than a Human?