Share
Download PDF
The European Congress of Radiology in Vienna last week saw the launch of the clinical decision support web portal for iGuide as well as reports on pilot projects.

Radiologists outlined their experiences of clinical decision support for imaging at one of the informal “Coffee and Talk” sessions at the European Congress of Radiology in Vienna last week.

Boris Brkljačić, professor of radiology and Vice-Dean at the University of Zagreb School of Medicine, Croatia reminded delegates that the value proposition of clinical decision support (CDS) is clear, consistent, complete and appropriate referrals. CDS reduces the need to vet imaging requests, reduces the number of avoidable (phone) consultations, makes the justification process more traceable and reliable, reduce sunnecessary or duplicate exams, helps raise the diagnostic yield of exams carried out and contributes to a reduction in waiting times. The ideal is to request the right test the first time.

Lluis Donoso, director of the diagnostic imaging department at the Hospital Clinic of Barcelona and HealthManagement’s Imaging Editor-in-Chief has piloted the European Society of Radiology’s iGuide in Barcelona with 80 GPs.

The ESR iGuide is a CDS system that uses referral guidelines for medical imaging developed by the European Society of Radiology based on the American College of Radiology (ACR) Appropriateness Criteria.

Prof. Donoso reminded the audience that iGuide has the advantages of being structured, consistent as well as educational. The reason for the exam is the necessary minimum but it does not replace other/ additional clinical information.

The guide is consistent: referrer and radiologist see the same appropriateness information. The educational aspect is that referrerss are guided towards tests with higher diagnostic value if appropriate. The data is traceable: workflow interactions are (anonymously) tracked, so patterns can be analysed and where necessary addressed.

Studies have shown that once CDS is introduced

The clear reasons for imaging exams facilitate more targeted protocols and performance of tests, making the best use of personnel and equipment, noted Donoso.

Henriettae Stahlbrandt, Vice Chair of the Department of Radiology, Höglandssjukhuset Eksjö, and President of the Swedish Society of Radiology, presented the results of a pilot implementation of iGuide. This pilot was implemented in a clinical non-university hospital setting in a region with 350,000 inhabitants, 215.000 exams a year and 300 coworkers. The iGuide was translated into Swedish by radiologists - there were close to 11,000 exam names in their spreadsheet that needed translation, adaptation and mapping. The pilot included the internal medicine department at Eksjö hospital as well as 4 GP clinics - Stahlbrandt advised regular visits. The pilot ran from April 2017 and the evaluation was by questionnaire before and after implementation. 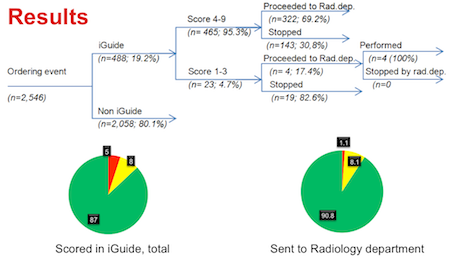 The 1.1% in the requests sent to the radiology department  amounted to 4 requests, and all were justified. During the project period, the percentage of inappropriate exams ordered went down. Following the pilot, the doctors were generally positive to about the programme, but want more user-friendliness and larger screens.

When asked about outliers, when doctors order inappropriate tests, the panel agreed that it is useful to have the evidence base in clinical decision support systems, to convince clinicians not to order a study, if there is no or poor evidence. And this can also be convincing for patients. They also recommended that clinicians translate the exam names into the local language, as clinical expertise is required.

With the implementation of the Basic Safety Standards (BSS) (2013/59/Euratom) in Europe, all imaging exams must be justified and comply with radiation protection standards. The iGuide answers this need. The iGuide is available as an integrated part of electronic referral workflows or as a stand-alone tool.

At ECR 2018 the web portal was launched. Users can consult evidence-based guidance through two simple workflow options and receive immediate feedback on which imaging test has the highest diagnostic value for the selected clinical indication. The iGuide has over 1800 indications, and includes dedicated content for oncologic and paediatric imaging.

The ESR iGuide portal can be accessed free of charge by ESR members and by others only until 30 September 2018. From October 1, subscription options are available for individual users. Institutional access is on offer for healthcare organisations, and there is also an option of countrywide licences to governments and health authorities.

ECR2018: The bionic radiologist of the future

Results from clinical trials of digital breast tomosynthesis in Sweden and Norway were reported at the recent European Congress... Read more