A provocative new book by Loyola Medicine radiation oncologist James S. Welsh, MD, “Sharks Get Cancer, Mole Rats Don’t: How Animals Could Hold the Key to Unlocking Cancer Immunity in Humans,” explores how animals can help us understand how the immune system can be used to fight cancer.

Dr. Welsh is a professor in the Department of Radiation Oncology of Loyola University Chicago Stritch School of Medicine.

After publication, the book, published by Prometheus Books and distributed by Penguin Random House, initially was named to Amazon’s list of Hot New Releases in Oncology and Medical Research and reached No. 1 on Barnes & Noble’s lists of new books in Immune System Physiology and Immunology.

“Dr. Welsh explores the scientific history of cancer like never before,” said Norman Wallis, PhD, executive director of the American College of Radiation Oncology. “With examples ranging from galaxies to dinosaurs, creepy mammals to disgusting sea creatures, and even particle physics, he weaves a story as good as any novel. And it comes together in a way that suggests a future cure for cancer.”

Dr. Welsh explores fascinating examples of how, in both animals and humans, the immune system in some cases effectively kills tumour cells, while in other cases cancer cells escape detection. He also explains how, contrary to popular belief, it’s possible to catch cancer -- as in the case of Tasmanian devils (marsupials in Australia the size of small dogs). 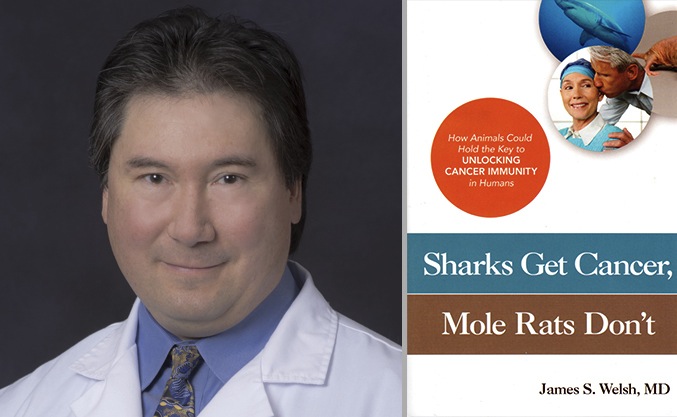 Tasmanian devils are on the verge of extinction due to a virulent form of contagious cancer. Similarly, clams on the Atlantic seaboard are vanishing due to a contagious leukaemia transmitted in sea water. Dogs can contract a contagious cancer as well, but usually overcome it spontaneously. Thereafter, the dogs become impervious to this type of cancer, providing an intriguing clue about the role of the immune system in cancer.

Animals offer many tantalising clues about the nature of cancer in humans.

Contrary to myth, sharks do get cancer. But naked and blind mole rats generally are not susceptible to the disease. In humans, an uncommon form of dwarfism called Laron syndrome confers near total cancer immunity. In another unusual phenomenon, a man died from ovarian cancer after receiving a kidney transplant from a woman who had the disease. In an even odder case, a tapeworm developed “cancer,” which spread throughout the patient’s body.

And in perhaps the book’s most extraordinary case, Dr. Welsh describes the seemingly miraculous cure of one of his patients, named Daniel, who had advanced metastatic melanoma. (Dr. Welsh first wrote about the case in a 2014 Discover magazine article.)

The highly aggressive cancer had spread to Daniel’s liver and bones, and he appeared to have only a few months to live. Daniel suffered excruciating pain from a tumour in his femur (thigh bone). Dr. Welsh offered Daniel local radiation to shrink the tumour, relieve the pain and reduce the risk of a fracture. This palliative treatment was intended only to relieve symptoms, not cure the disease.

But three months later, a CT scan found no trace of cancer anywhere. Daniel benefitted from a rare phenomenon called the abscopal effect, in which localised treatment not only shrinks the targeted tumour but distant tumours as well. It appears the local radiation somehow stimulated Daniel’s immune system to attack cancer throughout his body.

Earlier attempts to fight cancer with immunotherapy were disappointing. These treatments strengthened the immune system, but also boosted the strength and number of previously unrecognised or underappreciated immunological guardian cells that actually protect the tumour.

Using Sugar To Detect Cancer: A Game Changer For Screening

Early detection of cancer, usually through advanced medical imaging, is crucial as it increases the chances of survival and... Read more

An international team of scientists has shown that the brains of patients with schizophrenia have the capacity to reorganise... Read more