Share
Download PDF
In the ICU setting, nearly 25 percent of patients who receive mechanical ventilation develop muscular weakness severe enough to impair their quality of life. New research shows that mechanically ventilated patients treated with vasopressor medications had a more than three-fold increase in the odds of developing ICU-associated weakness.
Notably, each day that a patient received a vasoactive medication, the odds of developing weakness increased by 35 percent, according to the research published in the journal CHEST. These findings highlight the unintended adverse effects of treatment and suggest possible interventions or avoidance strategies.
Patients with shock, a life-threatening condition causing a decrease in blood flow to the body, often require treatment with vasopressor medications that raise the blood pressure and restore blood flow to vital organs.
Survivorship from critical illness is improving; however, patients often inherit many burdens including severe persistent weakness. To investigate possible causes of weakness, lead investigator Krysta S. Wolfe, MD and colleagues conducted a retrospective analysis of data from two clinical trials that studied the effects of engaging in early versus late physical and occupational therapy on functional outcomes and the development of weakness. Their analysis focused on 172 mechanically ventilated patients, some of whom experienced shock. Of these patients, 80 demonstrated ICU-associated weakness when discharged from the hospital.
The researchers found that the use of vasoactive medications was associated with a greater than three-fold increase in the odds of developing weakness. To better understand how vasopressors might be causing weakness, the researchers divided the data according to whether the patients received vasopressors that stimulate beta-adrenergic receptors (norepinephrine, epinephrine, dopamine, and dobutamine) and those that do not (phenylephrine and vasopressin).
Further analysis of data showed only vasopressors that stimulate beta-adrenergic receptors were associated with weakness. In fact, the incidence of ICU-associated weakness increased along with the cumulative dose of norepinephrine, but not with vasopressin or phenylephrine. 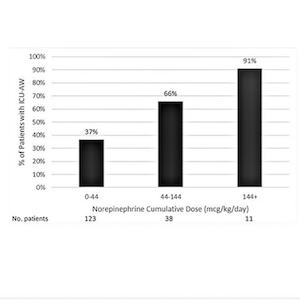 Figure 1: The proportion of patients with ICU-acquired weakness significantly increases with increasing cumulative dose of norepinephrine (Chi² for trend P value < .0001).
"Vasopressors are medications commonly used in the ICU that have not traditionally been thought to independently contribute to the development of weakness. Recognition of this potential effect of vasopressors is important and can help direct future study and targeted interventions, such as early physical therapy, to reduce the risk of developing weakness during critical illness," says senior investigator John P. Kress, MD, FCCP, who is Dr. Wolfe's colleague at the University of Chicago's Department of Medicine, Section of Pulmonary and Critical Care, Chicago, IL.
The findings also suggest that noradrenergic vasopressors may not be the best choice for patients at heightened risk of ICU-associated weakness. The investigators recommend that the potential connection between vasopressors and weakness after critical illness merits further investigation.
Source: Chest
Figure 1 Image Credit: Chest
Cover Image Credit: PishT via Wikimedia Commons

«« #EUSEM18: Sepsis in the over 70s presents differently

Researchers from Imperial College London have created an artificial intelligence system that could help treat patients with... Read more

When is mechanical ventilation harmful to the lung?

Ventilator-induced lung injury is a multifaceted problem that has progressively become a preoccupation for intensivists and... Read more

Sepsis remains the most common cause of vasodilatory shock worldwide. The mainstay of haemodynamic treatment of septic shock... Read more