Share
Download PDF
Virginia Tech researchers say a new group of antibiotics shows potential in fighting the bacteria Staphylococcus aureus (staph) and the antibiotic-resistant strains commonly known as MRSA. The discovery, published in Medicinal Chemistry Communications, shows that the new antibiotics are unlike contemporary antibiotics because they contain iridium, a silvery-white transition metal.

New transition metal complexes do not easily breakdown, which is important for delivery of antibiotics to where they are needed to fight infections in the body. Although these compounds contain iridium, the researchers say tests have shown that they are nontoxic to animals and animal cells. The new antibiotics effectively kill the bacteria without inhibiting mammalian cells. A version of the antibiotic was tested for toxicity in mice with no ill effects.

The research team is currently testing the compounds in human cell lines and, so far, the cells have remained normal and healthy.

"So far our findings show that these compounds are safer than other compounds made from transition metals. One of the reasons for this is that the compounds in this paper that target MRSA are very specific, meaning that a specific structure-function relationship must be met in order to kill the bacteria," explains Joseph Merola, a professor of chemistry in the College of Science and a corresponding author of the study.

The next step for the team is to "identify various characteristics of these antibiotics, such as their stability, their distribution and concentration in animal tissue, their penetration into white blood cells, and their metabolism in animals," says Joseph Falkinham, a professor of microbiology in the College of Science and an affiliate of Virginia Tech.

In both the U.S. and Europe, the spread of MRSA (methicillin-resistant Staphylococcus aureus) is a major threat to people in hospitals and other healthcare facilities. In 2013, invasive MRSA infections were responsible for an estimated 9,937 deaths in the U.S.

When people contract the bacteria in a hospital setting, the infection can be life-threatening and cause pneumonia and infections in the bloodstream and in surgical wounds, according to the CDC.

Staphylococcus aureus is a bacterium commonly found on the skin and nose, which is how it spreads into hospitals and other medical facilities. 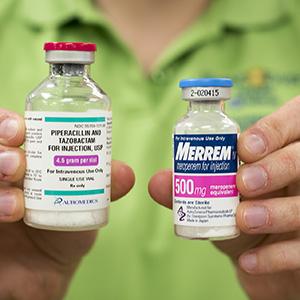 In other new research, a trio of antibiotics (Meropenem, piperacillin and tazobactam) has been shown to be effective against MRSA in test tubes and laboratory mice, in a study published online in Nature Chemical Biology. The researchers also found that the combination did not produce resistance in MRSA bacteria.

Principal investigator Gautam Dantas, PhD, an associate professor of pathology and immunology at Washington University School of Medicine hopes that the same strategy may work in people, and notes that using the drug combination to treat people has the potential to begin quickly because all three antibiotics are approved by the FDA.

A promising new drug for sepsis will have its first clinical trials thanks to a new grant from the British Heart Foundation .... Read more

New guidelines on the prevention and control of multidrug-resistant Gram-negative bacteria in hospitals have been published by... Read more