Share
Download PDF
At this years 39th International Symposium on Intensive Care and Emergency Medicine, Professor Jerry Nolan, a consultant in anaesthesia and intensive care medicine at the Royal United Hospital, Bath, talked about new developments in CPR during the Max Harry Weil Lecture, one of the most important presentations at #ISICEM19. Dr. Max Harry Weil is considered to be a huge mind in critical care medicine and is often referred to as the Father of modern day critical care.
Prof. Nolan began with an overview of cardiopulmonary resuscitation and measures that can be taken to have the biggest impact on survival. He explained that it's what goes on, very early on, for out of hospital cardiac arrest (OHCA) that has the biggest chance of making an impact. He talked about community response - the interaction between the bystander who has witnessed somebody collapse and  makes contact with the EMS and communicates with the dispatcher through which the EMS is activated. This initial contact is very important.
Prof. Nolan pointed out that one of the big problems we face is that around 25% of all OHCA are not initially detected by the dispatcher. This may be due to confusion around the communication coming from the scene, or the description for example of breathing, when in fact the patient is gasping after cardiac arrest and other similar aspects. In order to improve this communication, Prof. Nolan highlighted the use of Artificial Intelligence (AI). AI could potentially be used to assist dispatchers in making those decisions on whether a caller is likely to be describing someone in cardiac arrest.
Prof. Nolan mentioned a start-up Danish firm Corti that uses artificial intelligence to help emergency dispatchers identify signs of cardiac arrest over the phone. The software works by listening in during emergency calls and by looking at a number of verbal and non-verbal patterns of communication such as the caller's tone of voice, the subject's breathing status and so on. In a recent paper published in Resuscitation, the machine learning framework, trained to recognise cardiac arrest from recorded calls, was compared to the actual recognition and time-to-recognition of cardiac arrest by medical dispatchers. 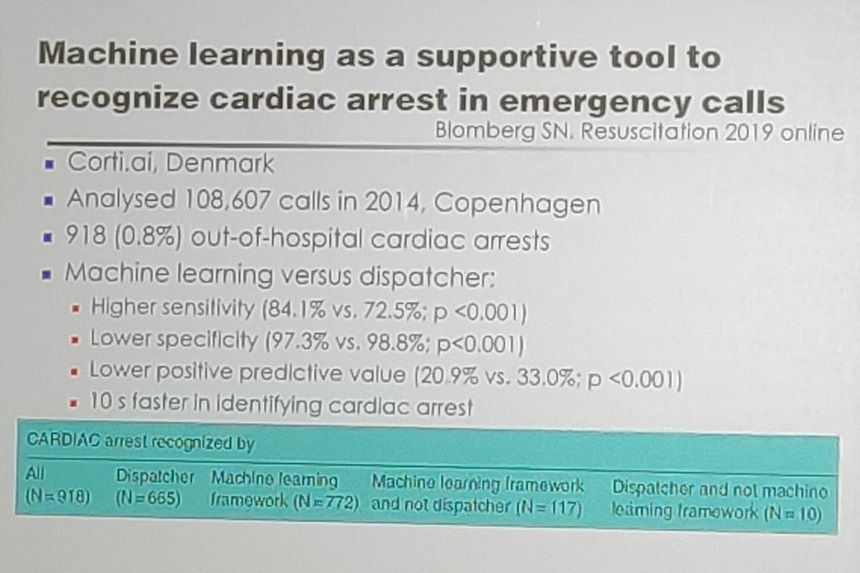 Machine learning had higher sensitivity but lower specificity and a lower positive predictive value. Time-to-recognition was significantly shorter for the machine learning framework compared to the medical dispatchers. These findings suggest that machine learning could be an effective decision support tool for emergency medical dispatchers.
Prof. Nolan highlighted that overall the AI system is 10 seconds faster in making that call and thus, this system can assist dispatchers in correctly identifying OHCA. He also mentioned that responders and volunteers could also sign up to app systems so that they can be alerted and directed to the scene of the cardiac arrest or via the nearest automated external defibrillator (AED). It would be possible to  mobilise all the volunteers and get them on the scene and start CPR and possibly deliver a defibrillator shock. These days, there is an increasing proportion of defibrillators being used by on-site volunteers. If you are shocked by a bystander using an AED on site, your chances of survival are somewhere between 60 and 70% and the overall survival rate as a consequence is much higher.
Source: Prof. Nolan's presentation at ISICEM - ICU Management & Practice Coverage
Image Credit: ICU Management & Practice; Prof. Nolan's presentation slides

Professor Jean-Pierre Frat presented the results of the FLORALI-2 trial at the 39th International Symposium on Intensive Care... Read more