Share
Download PDF
Professor Giovanni Landoni, the Head of Research, Anesthesia and Intensive Care Department, IRCCS San Raffaele Scientific Institute, Milan, presented the results of the MYRIAD trial at the 39th International Symposium on Intensive Care and Emergency Medicine. The study, 'Volatile anesthetics versus total intravenous anesthesia for cardiac surgery,' was just published in the New England Journal of Medicine.
The MYRIAD (Mortality in Cardiac Surgery Randomized Trial of Volatile Anesthetics) trial is a pragmatic, multicentre, single-blind, controlled trial that included 36 centres in 13 countries. Study patients were scheduled to undergo elective coronary artery bypass grafting (CABG), the most common major surgical procedure that is performed worldwide. Patients were randomly assigned to an intraoperative anaesthetic regimen that included a volatile anaesthetic (desflurane, isoflurane, or sevoflurane) or total intravenous anaesthesia.
In his presentation, Prof. Landoni pointed out that if you're working in the ICU, you know volatile agents because they allow an easy daily sedation interruption or implementation of sedative rotation; maybe sometimes they allow you to treat refractory status asthmaticus disorder or refractory status epilepticus. He mentioned that there are at least three ways to administer volatile agents in the ICU. But in this trial, patients were randomised in the cardiac surgical theatre. Prof. Landoni highlighted the cardioproective properties of volatile agents that probably do exist since there are thousands of articles that state that this effect is present in humans. Several observational and randomised trials suggest the beneficial effects of volatile agents when used perioperatively in patients undergoing cardiac surgery, hence this trial was performed in CABG patients because this is a very standardised procedure and is a perfect model of ischaemia perfusion injury.
The trial included a total of 5400 patients out of which 2709 were assigned to the volatile agents group while 2691 were assigned to the total intravenous anaesthesia group. Patients in the total intravenous anaesthesia group did not receive any volatile agents. The primary outcome of the trial was death from any cause at Year 1. Secondary outcomes included death from any cause at 30 days, nonfatal myocardial infarction at 30 days or death at 30 days, death from cardiac causes at 30 days and 1 year, hospital readmission and duration of stay.
The hypothesis of the trial, as highlighted by Prof. Landoni, was that the 1-year incidence of death from any cause would be 3% of the total intravenous anaesthesia group compared to 2% in the volatile anaesthetic group.
At one-year follow-up, 2.8% patients in the volatile group and 3% patients in the total intravenous anaesthesia group died. At time of 30-day follow-up, 1.4% patients in the volatile anaesthetist group and 1.3% in the total intravenous anaesthesia group died. Overall, no significant difference was observed between the two groups in any of the secondary outcomes nor was there any significant difference in mortality over time. Therefore, intraoperative anaesthesia with a volatile anaesthetic did not result in significant lowering the number of deaths at 1-year follow up as compared to total intravenous anaesthesia. The same was found to be true for outcomes of death at 30 days. The incidence of adverse events also did not differ significantly between the two groups. 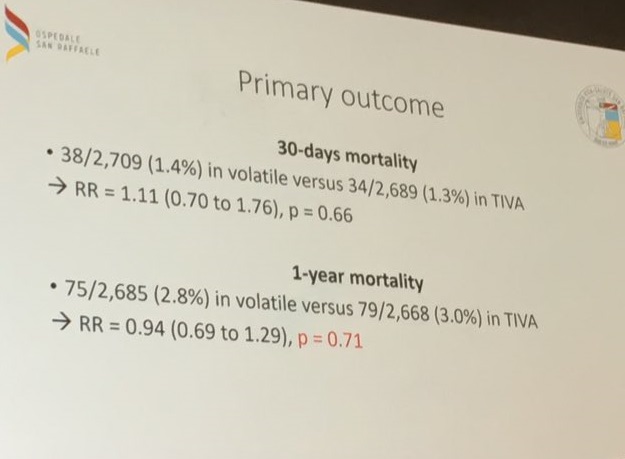 According to Prof. Landoni, we found no difference in patients with low ejection fraction, young patients, those who were already on beta-blockers, those who underwent multiple bypass or those who received different combination of intravenous  agents for anaesthesia induction. No difference was observed for secondary outcomes either. He did point out that there was a reduction in haemodynamically significant myocardial infarction in the volatile group. He concluded that we are using powerful drugs and probably their effects goes beyond the perioperative period, but when we routinely apply volatile agents, the overall effect is no different when compared with total intravenous anaesthesia. He suggested that these findings should not be translated into new settings because these are very powerful drugs that still need to be studied further.
Source: Prof. Landoni's presentation covered by ICU Management & Practice
Image Credit: Prof. Landoni's slides; ICU Management & Practice

Professor Jean-Pierre Frat presented the results of the FLORALI-2 trial at the 39th International Symposium on Intensive Care... Read more

At the 39th International Symposium on Intensive Care and Emergency Medicine , Dr. Michael Pulia discussed the challenges of... Read more