The increased recognition of proteins in critical illness

Share
Download PDF Back
There are many new concepts and old controversies surrounding nutrition in critical care such as: the role of trophic feeding, permissive underfeeding, the use of immune modulating agents, and the optimal timing of nutrient delivery. However, enteral nutrition and protein delivery have consistently been found to be beneficial.

Traditionally, the concerns in the ICU were about meeting energy requirements while protein levels were rarely considered. Early work carried out in the 1920s by Cuthbertson had largely been forgotten until the 1980s.

Conditions in the ICU result in loss of muscle mass: patients are immobile, often have minimal energy and protein delivery, and undergo little or no resistance exercise.30-32 Twenty-one days after a single blunt injury, 16% of total body protein is lost, 67% of it from the muscle.33 Resting energy expenditure (REE) increases progressively over the first week to 40% above normal and can still be elevated after three weeks. 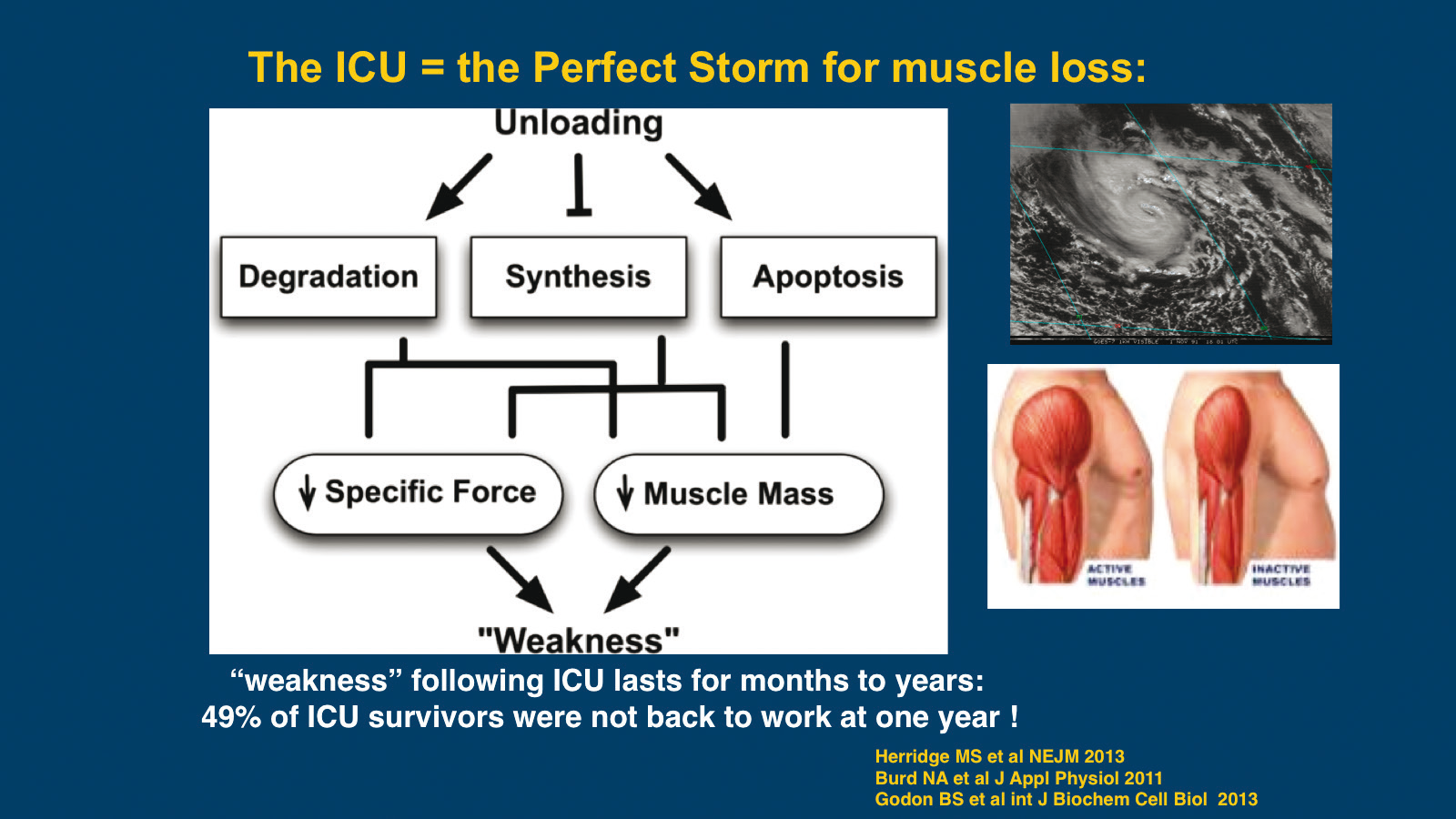 Conventional methods of analysis may not give a true picture of the rate of muscle loss. Ultrasound of the rectus femoris muscle in ICU patients showed a loss of around 10% within 10 days; but biopsies showed a thinning of muscle collagen fibres by 17.5% and when using a ratio of DNA to cellular protein, a loss of 29.5% is seen.34 Significant inflammatory changes in skeletal muscle were observed despite patients being given an average of 0.7g/kg/day of protein.

A recent study investigating mechanisms of chronic muscle wasting in elderly ICU patients found that most parameters such as proteolysis, autophagy and inflammatory cells normalised at six months, but satellite cells remained consistently depressed.36 Satellite cells appear to regulate the ability of muscle to recover from major loss, therefore if these cells are compromised, there is a decreased ability to regenerate muscle. ICU-acquired weakness and muscle wasting has a complex aetiology but increased protein degradation, reduced protein synthesis and often limited protein intake play a part.37

The loss of muscle mass is dramatically increased on admission to an ICU. If inadequate protein is not supplied to these catabolic patients muscle lost during hospitalisation may never be regained. It has been reported that short term amino acid infusions improve protein balance and small randomised clinical trials with parenteral nutrition show modest benefi ts in muscle strength and fatigue.38-41

Questions still surround the optimal target for protein. There are numerous studies supporting protein delivery in the ICU from 0.8g/kg/day up to 2.5g/kg/ day. Large observational studies of ICU patients report most critically ill patients receive around 0.6g/kg/day of protein. Several studies consistently support that the goal for protein delivery should be at least 1.5g/kg/day and possibly higher.41-45

There is no consensus as yet on the upper limit. Some clinicians advocate delivery of up to 3g/kg/day (in adolescent patients), but guidelines are generally consistent in recommending an upper limit of 2.5g/kg/day.46,47 There are potential issues with excess protein including azotaemia, hepatic protein synthesis and altered mental status which are more theoretical than observed.48,49

A number of studies have demonstrated that infusion of exogenous amino acids can improve whole-body protein balance, without increasing amino acid oxidation rates in critically ill patients.38,50,51 A higher protein intake was generally associated with an improved nitrogen balance, with dosages of 2g/kg/day being more successful than lower intakes.52

There is also concern that protein delivery may affect the autophagy balance. Nutrient delivery inhibits autophagy but activates cellular protein synthesis so there is not a simple direct relationship between feeding (or starvation) and autophagy.

Could anabolic resistance be a factor in ICU patients? Anabolic resistance is driven by an insensitivity to the anabolic effects of amino acids, particularly leucine. Although we do not have definitive answers for overcoming anabolic resistance we do know that certain approaches, such as hypercaloric PN or EN, hypocaloric feeding, use of anti-inflammatory, and appetite stimulants do not work.

On the other hand we know that certain interventions work consistently to protect lean body mass: protein supplementation, delivered by pulsed bolus; early enteral feeding, which protects the gut barrier and decreases systemic inflammation; metabolic modulation with nutrients such as leucine, arginine, and specialised pro-resolving molecules (SPMs); glycaemic control, resistance exercise and support for the microbiome. Other interventions appear to work in other patient groups but have not yet been confirmed as of benefit in the ICU.

In conclusion, there is good evidence to support protein in the ICU is beneficial although delivery must be individualised. An upper range of 2.5g/kg/day is considered safe. Optimal protein intake may be different in the acute compared to the prolonged phase of illness. Due to the heterogeneous nature of the ICU population decisions must be made on an individual basis. Aggressive protein delivery combined with resistance exercise may improve muscle kinetics, metabolism and regeneration. Most of our evidence currently comes from observational trials, which may not be consistent with RCTs and there are still many unanswered questions.

More than half of ICU patients in a new study experienced delirium for long periods during their stay. Sedative-associated delirium... Read more

ICU, Nutrition, proteins, Nestle Nutrition Institute, Nestle symposium ESICM LIVES 2017 There are many new concepts and old controversies surrounding nutrition in critical care such as: the role of trophic feeding, permissive underfeeding, the use of immune modulating agents, and the optimal timing of nutrient delivery. However, enteral nutr

(2020-01-25 10:39)
HOW I GOT MY EX HUSBAND BACK WITH THE HELP OF REAL AND EFFECTIVE SPELL FROM DR Osasu My name is Olivia Jayden, I never thought I will smile again, My husband left me with two kids for one year, All effort to bring him back failed I thought I'm not going to see him again not until I met a lady called Jesse who told me about a spell caster called Dr. Osasu , She gave me his email address and mobile number and I contacted him and he assured me that within 48hours my husband will come back to me, In less than 48hours my husband came back started begging for forgiveness saying it is the devils work, so I'm still surprise till now about this miracle,i couldn't conceive but as soon as the spell was cast,i became pregnant and gave birth to my third child,if you need any assistance from him you can contact him via:email: [email protected] Or WhatsApp or call him now:
+2347064365391 . Dr.Osasu also cures: 1. HIV / AIDS 2. HERPES 1/2 3. CANCER 4. ALS (Lou Gehrig’s disease) 5. Hepatitis B

Real Spellcasters 2020/Get your ex Lover back no matter why he left you
Hello friends,I am Campbell matt, This is my testimony on how my ex lover come back to me..i want to say a very big thanks and appreciation

to Dr Ikhile solution home for bringing back my lover who left me for almost 2 year,i feel like my life is completely over, so one day as i

was surfing on the internet for recommend spell caster who will help me to bring my lover back, Finally i met a writing how so many

testimony talking about how DR IKHILE help to restore relationship back,so i decided to give it a try so i contacted the spell caster

called DR IKHILE Website http://solutiontemples.com and explain my problems to him,and he cast spell love spell luckily within 24 hours my

lover really called me and started apologizing for all he had caused me.and be begging me to accept him back and will are livingtogether

and happily marriade, I am the happiest woman on earth today because DR IKHILE has done a wonderful deeds in my life and i will continue to

him. his Website:http://solutiontemples.com, Email [email protected] Call or Whats App +27789518085 you can text me on my number