Multidrug-Resistant Gram-Negative Bacteria in the ICU

Share
Download Article Back
Severe infections by antibiotic resistant gram-negative bacteria are frequent in ICU patients. They are associated with high morbidity and mortality.

Bacterial infections in patients hospitalised in the Intensive Care Unit (ICU) are frequent, and they elicit an increase in morbidity and mortality. The emerging development of antibiotic resistance in gram-negative bacteria (GNB) is of concern, since they are the most frequent infectious agents in critically ill patients with comorbidities or prolonged hospital stay, surgical patients and patients with invasive biomedical devices. The most frequent severe infections by GNB are caused by Acinetobacter baumannii, Pseudomonas aeruginosa, Klebsiella pneumoniae and Escherichia coli. These bacteria have developed multiple mechanisms of resistance to various types of antibiotics in the last decades, at a faster rate than the development of new drugs against them. This issue is a matter of concern for the World Health Organization (WHO).

Multidrug-resistant bacteria (MDR) are those which display resistance to three or more groups of antibiotics. Gram-negative bacteria have developed increasing antibiotic resistance; they also possess the capability to find new forms of resistance and are able to transmit them through certain genetic elements such as plasmids and transposons. The Centers for Disease Control and Prevention (CDC) classifies 18 germs into one of three categories: urgent, serious and concerning, according to their development of antimicrobial resistance. The major MDR gram-negative bacteria can be found in the first two groups (CDC 2019; Tacconelli 2014; Tacconelli 2019). According to data from the National Healthcare Safety Network (NHSN), in 2008, 13% of infections caused by E. coli and Klebsiella, 17% of those caused by P. aeruginosa and 74% of those caused by A. baumannii in the ICU were classified as MDR, showing a trend of increasing resistance in the last ten years. Likewise, 22.3% of K. pneumoniae positive cultures on invasive biomedical devices were classified as MDR, with an 8% to 15% increase in carbapenem resistance (CDC 2019; Tacconelli 2014; Tacconelli 2019; Hetzler 2022).

In general, MDR-GNB can be classified into four phenotypes: 1) Third-generation cephalosporin-resistant Enterobacteriaceae (3GCephRE) and carbapenem-resistant Enterobacteriaceae (CRE), 2) carbapenem-resistant P. aeruginosa, 3) K. pneumoniae and 4) carbapenem-resistant A. baumannii. These are considered by the WHO as pathogens of critical priority due to their high pathogenic burden and few treatment options (Tacconelli 2014; Tacconelli 2019; Hetzler 2022). Infections caused by MDR gram-negative bacteria (MDR-GNB) in the ICU include ventilator-associated pneumonias (VAP) mainly due to A. baumannii and P. aeruginosa, catheter-associated urinary tract infections (CAUTI) mostly caused by Escherichia coli and K. pneumoniae, and surgical site infections (SSI), commonly caused by P. aeruginosa, K. pneumoniae and A. baumannii (Gatti 2021; Tedja 2015) (Figure 1). 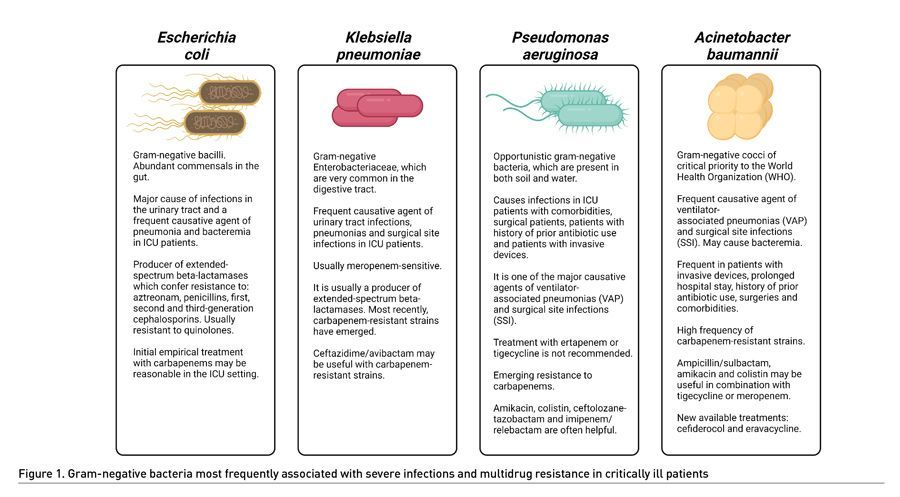 Mechanisms of antibiotic resistance can be classified into four groups (Figure 2). The first mechanism consists of enzymatic inactivation through the production of enzymes capable of hydrolysing or inactivating several types of antibiotics, particularly beta-lactams; these are known as producers of beta-lactamases, which are capable of progressively expanding their resistance spectrum. Beta-lactamases are classified as follows: 1) based upon the molecular structure of the active enzyme site and amino acid sequences, 2) based upon the functional profiles of hydrolysis and inhibition, and 3) phenotypically, extended spectrum beta-lactamases (ESBLs), AmpC beta-lactamases, cephalosporinases and carbapenemases. ESBLs inactivate most penicillins and cephalosporins (including third and fourth-generation cephalosporins), as well as aztreonam; nonetheless, they often harbour additional genes or mutations for resistance to other antibiotics and are most frequently produced by E. coli, K. pneumoniae, K. oxytoca and Proteus mirabilis, but they are also used by Enterobacteriaceae such as P. aeruginosa, A. baumannii and S. maltophilia (Hetzler 2022; Tamma 2022). Carbapenem-resistant Enterobacteriaceae (CRE) are defined as such when resistance to at least one carbapenem is documented, due to production of carbapenemases and/or amplification of non-carbapenemase beta-lactamase genes. The most clinically relevant of them are carbapenemase producing-Klebsiella pneumoniae (KPC-KP), New Delhi metallo-beta-lactamase (NDM)-producing Escherichia coli and Verona integron-encoded metallo-beta-lactamases (VIM) produced by Enterobacteriaceae. Other important carbapenemases are imipenem hydrolysing metallo-beta-lactamases (IMPs) and oxacillinases (Hetzler 2022; Tamma 2022). 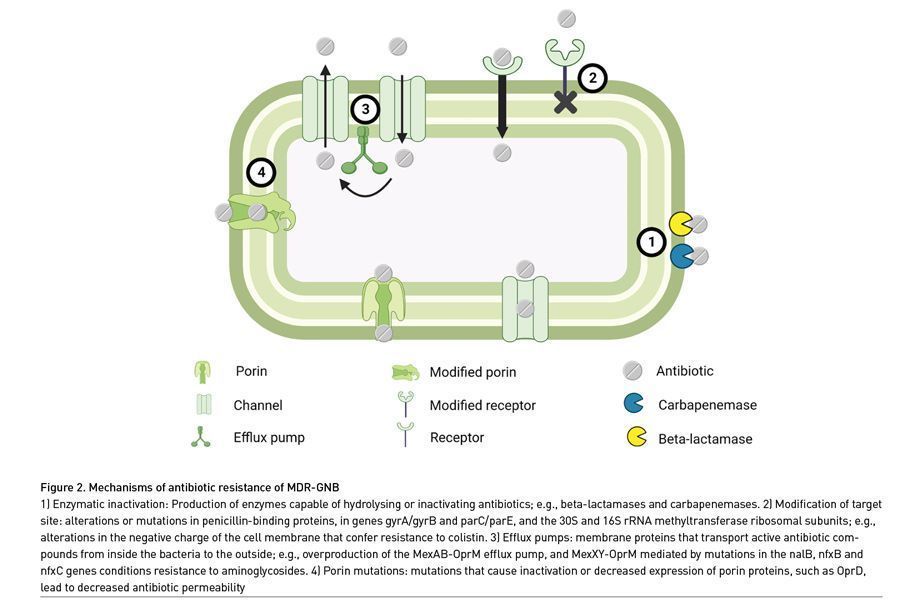 The second mechanism of resistance is via modification of the antibiotic’s target site in the bacterial membrane, by modifying the binding proteins and thus avoiding its effect, or through changes in the polarity of the membrane in order to repel the antibiotic, as is the case with colistin. The third mechanism is generated through the expulsion of active compounds of antibiotics from inside the bacteria through efflux pumps, commonly observed in resistance to aminoglycosides, macrolides and fluoroquinolones by P. aeruginosa (Zhanel 2004). The fourth and last described mechanism of resistance consists of mutation of genes that encode porin-type proteins, thereby decreasing permeability to antibiotics (Hetzler 2022; Tamma 2022).

Important Considerations for Diagnosis and Treatment

When severe infections are suspected, early empirical antibiotic treatment must be prompted. In a patient without hypotension or clinical findings suggestive of tissue hypoperfusion, it is recommended to start antimicrobial therapy within the first three hours, bearing in mind the following considerations: 1) the host’s context, risk factors such as comorbidities, immunological and nutritional status, age, sex, antibiotic exposure in the last 30 days, chemotherapy or other relevant treatments, 2) source of infection, organ or biomedical device, 3) local epidemiology and patterns of susceptibility, and antibiotic resistance in the last six months, and 4) clinical guidelines for particular infections (Tamma 2022). In case of septic shock, which is characterised by hypotension and tissue hypoperfusion as evidenced by hyperlactataemia, delayed capillary refill, altered mental status, oliguria/anuria and/or mottled skin, it is recommended to start broad-spectrum antibiotics within the first hour (Surviving Sepsis Campaign Guidelines 2021).

Identification and treatment of the source of infection and the aetiologic agent are the cornerstones of treatment. This should be based on the clinical presentation, history and physical examination, laboratory and imaging tests, local epidemiology and microbiological tests; the latter should preferably be ordered before initiating antibiotics, though it should not delay therapy if unavailable (Tamma 2022; López-Pueyo 2011). In case surgical management is warranted for source of infection control, this should not be delayed, since delay increases both morbidity and mortality (Surviving Sepsis Campaign 2021). GNB pose a frequent cause of intra-abdominal abscesses, urinary tract infections, surgical site infections and soft tissue infections that may require surgical management.

ESBLs are resistant to all beta-lactams with the exception of cephamycins and carbapenems. Therapeutic failure has been described with third-generation cephalosporins with an in vitro pattern of intermediate or greater sensitivity, thus once ESBLs production is confirmed, the strain must be considered resistant to all beta-lactams, except for carbapenems and cephamycins. However, cefoxitin, cefotetan and cefamandole are not recommended as treatment options due to the risk of developing antibiotic resistance during the course of the treatment (López-Puayo 2011). Carbapenems are the treatment of choice for severe infections, since they seem to be the only ones capable of maintaining bactericidal activity for 24 hours against high inocula (Tamma 2022), with the exception of ertapenem. In case of septic shock, meropenem and imipenem are mostly recommended. In mild cases, piperacillin/tazobactam and amoxicillin/clavulanic acid or fluoroquinolones may be considered. ESBLs-producing E. coli is the most frequently isolated infectious agent in this group.

K. pneumoniae is the main producer of KPC-type class A carbapenemases. There is no high-quality evidence for targeted treatment, and current recommendations are based upon observational studies. High-dose carbapenems may be considered, and also in combination with aminoglycosides, polymyxins, tigecycline, or even another carbapenem. Single therapy with ceftazidime/avibactam, aztreonam or cefiderocol may be considered, the latter in case of resistance to polymyxins (Bassetti 2018; Bassetti 2020).

MDR P. aeruginosa is one of the major causes of VAP; it is also associated with longer ICU stay, increasing days on mechanical ventilation and higher mortality. It is recommended to prescribe two anti-pseudomonas antibiotics with different mechanism of action as initial empirical therapy, and once susceptibility tests are available, a single antibiotic may be considered according to sensitivity, except for patients with septic shock or patients with high risk of death, in whom combined therapy is preferred. Aminoglycosides should not be used in single therapy due to low success rates; additionally, the use of inhaled antibiotics is not routinely recommended. For critically ill patients without source control and in whom carbapenem-resistant (though susceptible to beta-lactams) P. aeruginosa has been isolated, treatment with either ceftolozane-tazobactam, ceftazidime-avibactam or imipenem-cilastatin-relebactam is suggested (Bassetti 2018; Tamma 2022).

Infections by A. baumannii are particularly serious and complicated due to increasing resistance to multiple drugs. In cases of infection by germs susceptible to carbapenems, high-dose meropenem and continuous IV infusion is recommended; nevertheless, its empirical use is not currently recommended as first-choice single therapy given its high resistance rate. For cases of VAP due to carbapenem-resistant A. baumannii, both the guidelines from the European Society of Clinical Microbiology and Infectious Diseases (ESCMID) and from the Infectious Diseases Society of America (IDSA) suggest the use of ampicillin/sulbactam according to susceptibility (Gatti 2021; Paul 2022; Anwer 2021; Bartal 2022). Combinations of colistin plus rifampicin, fosfomycin, or ampicillin/sulbactam are associated with higher rates of success compared with colistin alone or ampicillin/sulbactam. Fluoroquinolones and tigecycline are not recommended as single therapy for the treatment of severe infections by A. baumannii (Liu 2021). In case of resistance to sulbactam, treatment with cefiderocol (Lawandi 2022) or combined treatment with fosfomycin plus ampicillin/sulbactam may both be considered. Combination therapy with inhaled colistin may also be taken into consideration (Gatti 2021).

Prevention and Control of Infections

Interventions to prevent and control the dissemination of MDR-GNB can be grouped into five categories: 1) hand-hygiene, 2) active screening cultures, 3) contact precautions, 4) environmental cleaning and 5) antimicrobial stewardship. Hand-hygiene has shown the greatest impact in reducing cross-contamination. The number of GNB in the skin is very low compared to the high levels of GNB that colonise the gut; however, it has been reported that up to 100% of healthcare workers’ hands can be contaminated by GNB (Taconnelli 2014).

Severe infections by MDR-GNB pose a serious public health threat, mostly affecting hospitalised patients and ICU patients. It is necessary to acknowledge the mechanisms that lead to bacterial resistance in order to implement strategies to decrease its dissemination. It is also necessary to acknowledge the available therapeutic options in order to set the most appropriate treatment in each individual case.

Does Antimicrobial Resistance Affect Clinical Outcomes in the ICU?

The problem of antimicrobial resistance and the use of a clinical decision score and point-of-care testing biomarkers, such... Read more