Airway pressure release ventilation (APRV) was originally described in 1987 (Downs and Stock 1987). Since its origin as a unique form of bi-level continuous positive airway pressure, APRV has become nearly ubiquitously available on mechanical ventilators over the course of 20 years. Increased use of the technique can be linked to presumptive benefits on oxygenation, patient comfort, and haemodynamics. To date, however, there is a dearth of quality investigational data to substantiate claims based largely on preclinical and observational studies that APRV should be the preferential ventilator mode used in patients with acute respiratory distress syndrome (ARDS).

APRV is classically described as a form of pressure controlled ventilation with an inverse inspiratory:expiratory ratio (Figure 1). The clinician prescribes the upper limit of airway pressure to be held for a specified period (Phigh and Thigh), as well as the corresponding “releases” in Phigh to a lower pressure for a predefined period (Plow and Tlow). Spontaneous patient breaths are typically allowed at any time in the ventilator cycle. Thus, APRV can be defined as inverse ratio, pressure control – intermittent mandatory ventilation with unrestricted spontaneous breathing. To further improve on this classic model, numerous customisations have been described that seek to optimise synchronisation and limit de-recruitment, such as allowance of spontaneous triggering only during mandatory inspiratory cycles and initiating inspiration at various points along the expiratory flow curve according to measured pulmonary compliance. 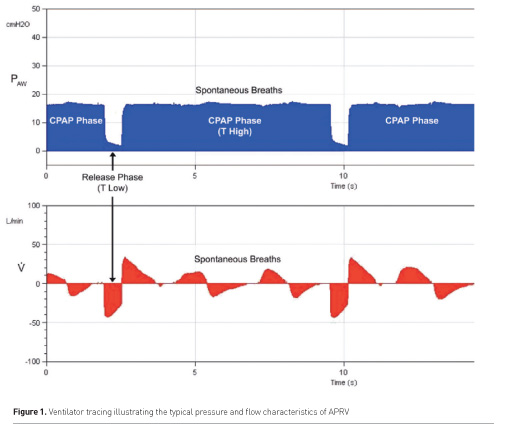 Perhaps the main intended benefit of APRV is achieving a higher mean airway pressure at lower peak and plateau pressures than conventional mechanical ventilation. Conceptually, this increased mean airway pressure will then better aerate recruitable lung units and improve oxygenation without leading to ventilator-induced lung injury (VILI). This concept was illustrated by Yoshida in a retrospective analysis of 18 patients with ARDS either with APRV or pressure support (PS) ventilation (Yoshida et al. 2009). Patients who received APRV were found to have more dramatic improvements at follow up in p:f ratio (median p:f 79 to 398 vs 96 to 249, p=0.018) and percentage gains in lung aeration (29 to 43%, p=0.008 vs 39 to 44%, p=ns) measured via computed tomography than patients who received PS. Similar findings of improved oxygenation have been demonstrated in additional small retrospective series, although it should be noted that the majority of publications evaluating APRV versus conventional ventilation illustrate that oxygenation between the two modes is largely similar, albeit with the benefit of lower peak airway pressures (Jain et al. 2016).

Active spontaneous breathing improves gas exchange through the optimisation of ventilation/perfusion matching in dependent lung regions (Putensen et al. 1999; Neumann et al. 2005). Given this, it is possible that the benefits seen in APRV could largely be attributed to effects of spontaneous ventilation. Putensen’s group randomised 30 patients with multiple trauma to receive either APRV alone, or a 72-hour period of pressure-controlled ventilation (PCV) followed by a wean with APRV (Putensen et al. 2001). The patients in the PCV group were ventilated at the same mandatory pressure and time limits as the APRV group, but were given paralytics to prohibit spontaneous respiration. Patients in the APRV alone group were found to have significantly higher p:f ratios through a 10-day follow-up period than their PCV counterparts, suggesting that spontaneous ventilation at APRV-type pressures may contribute to larger gains in gas exchange than an increase in mean airway pressure alone.

Another proposed benefit of spontaneous ventilation during APRV is increased patient comfort. As the main goals of sedation during mechanical ventilation are to optimise patient comfort and encourage synchrony, it follows that patients who breathe comfortably throughout the respiratory cycle may have reduced sedation requirements. The results from Putensen’s study suggest that the increased patient comfort attributed to spontaneous ventilation leads directly to a reduced sedative requirement, and the authors link this finding to an observed decrease in both ventilator days (18 vs 25, p=0.011) and ICU stay (23 vs 30, p=0.032) for patients who were in the APRV group. Lastly, spontaneous ventilation during APRV may provide the additional haemodynamic benefit of increased venous return through diaphragmatic excursion. Patients in the APRV alone group in Putensen’s study were found to have significantly higher cardiac indices as well as decreased dose requirements for vasopressors and inotropes, suggesting that spontaneous respirations were associated with improved haemodynamics.

Although the inferences made from the previously mentioned small retrospective series are encouraging, they do not carry the same scientific weight as evidence that would come from a randomised, controlled trial (RCT). Furthermore, the marked heterogeneity in APRV settings, stemming from a lack of commonly accepted APRV protocols, prohibits accurate meta-analyses of their outcomes. Perhaps the main limitation to APRV’s inclusion in the routine management of ARDS is the lack of prospective evidence from an RCT comparing the technique to the current standard of care. As is the case in both Yoshida and Putensen’s studies, the few randomised trials that have investigated the clinical impact of APRV have not compared it to the gold standard of lung-protective ventilation (LPV).

Maxwell’s study in 2010 remains the only RCT to investigate whether APRV can improve outcomes for patients with ARDS when compared to LPV (Maxwell et al. 2010). 63 patients with polytrauma were randomised to receive either APRV or LPV. Of note, patients in the APRV group had significantly higher APACHE II scores. Through a 5 day follow-up period, the group did not find any significant differences between groups in p:f ratio, ventilator days, sedation requirements, ICU length of stay, or mortality. Although the study did not solely include patients with ARDS, it should be noted that 45% and 34% of patients in the APRV and LPV groups suffered from ARDS at baseline. One interpretation of the results of this trial therefore could be that APRV might neither be an effective preventative nor therapeutic management strategy for ARDS.

In contrast to Maxwell’s findings, Andrews et al. published a retrospective observational review in 2013 that claimed to provide evidence of APRV’s ability to prevent ARDS and possibly reduce mortality in trauma patients (Andrews et al. 2013). The authors performed a systematic review identifying studies with 100 or more trauma patients in which ARDS and mortality outcomes were reported, and then compared to those incidences to those from a single centre where trauma patients were routinely placed on APRV as a preventative strategy. The authors reported impressive differences in both ARDS incidence and mortality (14 vs 1.3 % and 14 vs 3.9% respectively). However, to suggest that APRV alone, as opposed to innumerable patient, clinical, or secular factors was the causative agent for such a dramatic difference in both outcomes is not scientifically responsible based on a comparison of observational data and class IV evidence.

As previously mentioned, spontaneous ventilation has many purported benefits. On the contrary, spontaneous ventilation can be harmful if dyssynchrony or breath stacking occur as a consequence of poor patient-ventilator interaction. Such can be the case during APRV, despite its promise as a safe and comfortable mode of ventilation. As evident by the tracings in Figure 2, a patient breathing spontaneously during a period of Phigh can be subjected to massive transpulmonary pressures and tidal volumes far exceeding the limits of conventional practice. As is the case for any mode of mechanical ventilation, close monitoring of the patient-ventilator interaction by an experienced clinician is necessary to prevent harm, especially in centres where experience in APRV is nascent. 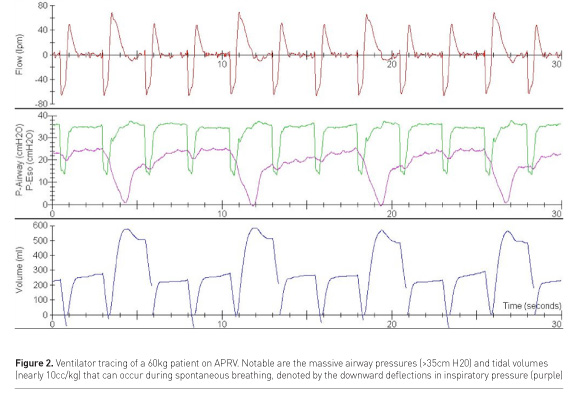 Preclinical and observational data suggest that APRV has the potential to improve oxygenation without the associated cost of VILI from high airway pressures. Its utility in patients with ARDS must be rigorously evaluated through randomised, controlled trials that are powered for mortality and other clinically relevant outcomes before it can be recommended as a routine measure. As we have learned from recent investigations into the use of oscillatory ventilation, another example of a promising strategy predicated on maximising oxygenation via the open lung with minimal risk of VILI, attractive early results may not always translate to improved patient outcomes after rigorous study (Ferguson et al. 2013). Therefore, although APRV may ultimately prove to be useful for oxygenating the ARDS patient, judgment should be reserved when considering its widespread use until it achieves the level of scientific evidence available for both the standard of care and rescue therapies relied on by clinicians to improve outcomes in this challenging patient population. The authors await a number of large RCTs currently underway that may provide additional clarity to this important clinical question.

The future delivered   In this article, we aim to summarise the developments in mechanical ventilation that we believe... Read more

Why You Should Always Debrief Your Resuscitations

Everyone who is active in resuscitation teams will admit: treating a patient in cardiac arrest is a challenge and often things... Read more

The Impact of Fast MIC Evaluation on Antimicrobial Stewardship: A Case Report

High Altitude Research and its Relevance to Critical Illness

Critical illness can be considered as the body’s failure to compensate for severe pathophysiological ‘stress’. The result is... Read more