Rethinking Critical Care - Use and Challenges of Artificial Intelligence

Intensive Care Medicine is generating an amount of data that is hardly analysable by humans. Digitalising and using artificial intelligence has to focus on providing less rather than more data.

Whether it's flying robots buzzing around the patient's bed or glowing beams that miraculously heal people in seconds: we are currently a long way from such science fiction scenarios in medicine - Good thing.

But the use of artificial intelligence (AI) in medicine is not a mysterium, and it certainly must not become one. After all, AI is not an autonomously acting black box over which we no longer have any influence and whose actions we humans can no longer comprehend. What many people are currently forgetting: every AI-based algorithm is always based on human intelligence. Everything that an AI does is developed and implemented by us humans. Only with highly complex deep learning do algorithms begin to independently recognise new patterns in the data sets and thus develop something like an apparent intelligence (Peine 2020). The machines therefore still have a long way to go before they have a life or even a will of their own.

No other area in a hospital is more influenced by the omnipresence of high-tech devices, then today’s intensive care units. Compared to other medical specialties there might be no other field where critically ill patients are such depended from organ support by machines and where their vitals are so frequently and continuously monitored. Thus, critically ill patients often generate data volumes that – in all dimensions - are not analysable by human brains (Johnson 2016).

Up to ten devices surround each patient bed in order to monitor all relevant parameters. This is actually quite a comfortable situation for us - if it weren't for the enormous volumes of data that have to be sifted through, documented and evaluated by far too few specialists at the same time. If we don't take countermeasures now, the system will inevitably collapse.

Patient data on an intensive care unit (ICU) are recorded in different resolutions or time intervals, depending on the urgency and implication (Table 1). Digital, electronic health records (EHR) are thus inconceivable in modern ICU treatment. At the same time, EHRs are creating pre-determined value for the use of big data, often linking all further incoming source systems like radiological, microbiological or laboratory findings, medication or other examination. EHRs bundle all relevant data and are particular sources for big data analysis. Nowadays, we aggregate over 1,000 data points per patient in a single hour on the wards (Cleophas 2015). If a physician cares for between 14 and 20 patients daily, there are between 14,000 and 20,000 data points that he or she would have to look at. This is a volume of work that almost no one can keep an overview of - this inevitably results in errors that can cost lives. This density of data will not decrease in the future. In fact, it is increasing by 30% per year, which intensive care physicians have to evaluate additionally. Like in an airplane cockpit, doctors try to keep the flood of data under control - sometimes with up to six screens simultaneously, on which new data appear every second. As a result, we have to spend an incredible amount of time preparing and interpreting this mass of data and recording it in accordance with general documentation requirements. The time that has to be invested in this could be used far more sensibly. 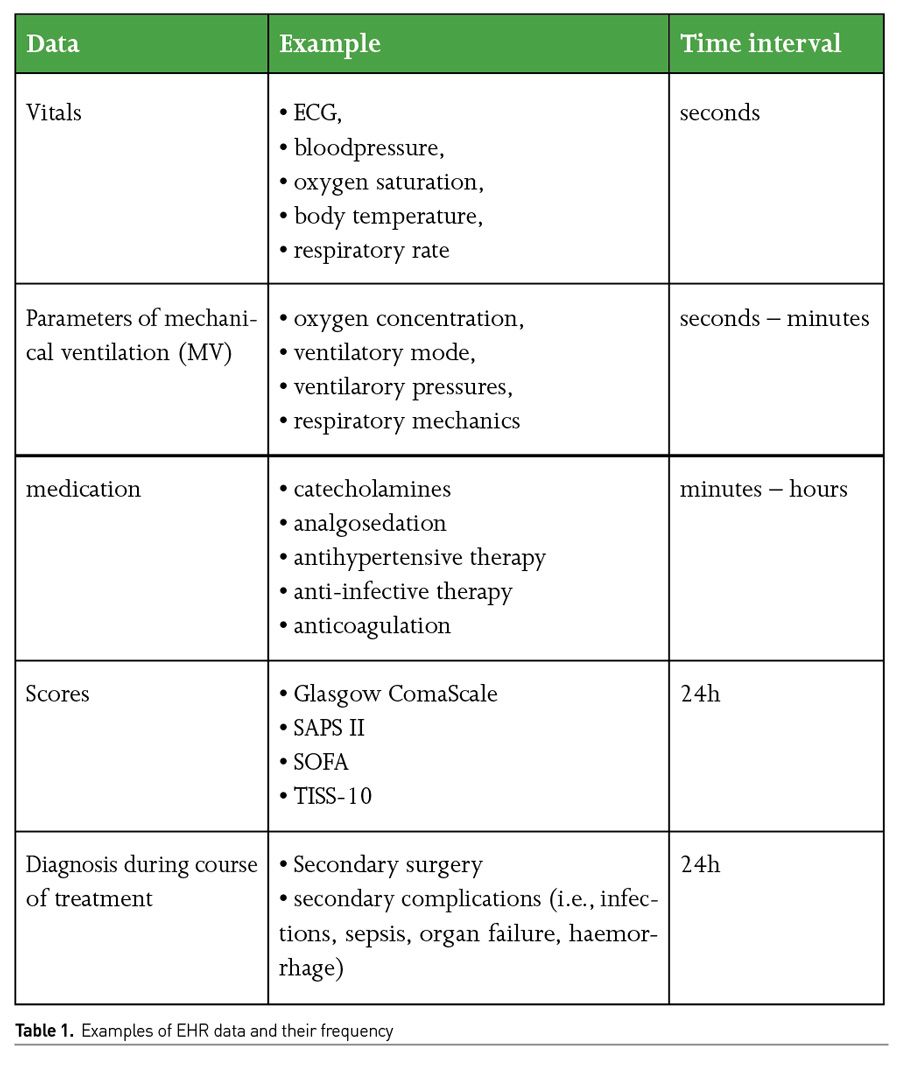 To give you a better idea, consider the following comparison: if you're traveling at 200 km/h on a busy highway, you'll certainly be pleased with the numerous assistance systems that work for the driver in her or his own car. Even if these systems - apart from autonomous driving - are active and support the person behind the wheel, for example in keeping in lane, he or she still has the steering wheel in his or her own hands and can intervene at any time. So it's not about replacing the driver, but about cooperative assistance. With cars that are traveling so fast that the human eye can no longer perceive some things, we gladly accept this assistance. So why are there still many reservations from the medical field?

In particular, the publication of two medical databases, the Medical Information Mart for Intensive Care III database (MIMIC-III) (Johnson 2016), consisting of data from 61,532 ICU patients from Beth Israel Deaconess Medical Center (USA), and the eICU Collaborative Research Database v2.0 (eICU) (Pollard 2018), consisting of data from 200,859 ICU patients from over 300 ICUs in the USA, has led to a democratisation of research in the field of big data in intensive care medicine. Recently, a European equivalent, the "Amsterdam UMCdb," with associated data from 20,181 ICU patients has also been published. With this retrospective data, scientists can now train AI systems without access to proprietary hospital data and any associated data privacy concerns.

Explainability and Transparency are Crucial

The complexity of algorithms means that a profound and detailed knowledge is needed to really understand them. That, in turn, would be the normal prerequisite for gaining acceptance for a new technology or product in medicine: Explain, Understand, Deploy. So how can it be ensured at all that a system actually fulfills the ethical principles for AI, such as being non-discriminatory, beneficial, autonomous and fair, if it cannot even be explained which factors and processing procedures underlie the result of an AI system?

Explainability therefore means both understandability and accountability. When medical decisions are supplemented and, in some cases, even overridden by AI-based algorithms, human experts should still have the possibility and ability to understand and explain the process of machine decision-making, at least upon request. An essential criterion of explainable artificial intelligence - especially in medicine - therefore remains causality as well as the measurement of the quality of explainability. Based on these premises, the challenge is to provide insight into why neural networks and other machine learning algorithms make their decisions (Wachter 2017) and how models that can be interpreted by humans can be developed and optimised (Stewart 2018). The aim has to be to generate adequate explanations for the decisions made (FDA 2020). The European Commission has also recently taken a position on this topic in a white paper (European Commission 2021).

Intensive Care Units: What to do Now?

To cut to the chase: if we want to maintain our high-quality care in critical care, we need to act now! Critical care needs a work environment where medical staff is not spending 50% of their work time in front of a computer. Meaningful mechanisms and powerful tools are needed - coupled with algorithms that help ensure we can focus on the essential data. In the future, we will need support systems that are technologically mature and help us provide evidence-based therapy at every moment. Telemedicine solutions bring specialist expertise to our patients' bedsides - both in the big city and in the countryside.

Evidently, sepsis/septic shock and the acute respiratory distress syndrome are the most relevant fatal entities in the ICU (SepNet Critical Care Trials Group 2016; Phua 2009), with mortality rates up to 50%. Both syndromes have in common that early diagnosis and adequate, guideline-adhered treatment is urgently demanded. However, particularly regarding early diagnosis, ICU physicians are often confronted with patients being transferred from home to ambulatory care to the ED and finally to the ICU. This is often time consuming and may aggravate patients` outcome due to delayed treatment.

Besides, in ARDS, nearly 40% of the cases are not even diagnosed by physicians, which suggests procedural and infrastructural deficits (Bellani 2016). Digital use and the approach of pre-processing data from EHRs respectively, could be a meaningful solution (Peine 2021). As kind of a medical decision support, a mobile device could draw attention to the relevant diagnosis of ARDS by providing diagnostic data and treatment recommendations from the EHR to a smartphone app (or other mobile devices). The use case ‘Algorithmic Surveillance of ICU patients with acute respiratory distress syndrome’ (ASIC) follows this strategy within a quality improvement project and is an integral part of the ‘Smart Medical Information Technology for Healthcare’ (SMITH) project (Winter 2018). It is the aim of this project to improve ARDS detection and guideline adherence in the treatment of mechanically ventilated ARDS-patients by implementing an application software (app) provided on a mobile device and consecutively improve outcome in this patient population (Figure 1). The data used by the ASIC app is obtained from the local EHR. Further, the ASIC app operates system-independently on different devices; however, it is primarily intended to be used on a mobile device (e.g. tablet, smartphone). All in all, this app use is only one clinical example for upcoming, diverse clinical considerations, giving physicians the opportunity to 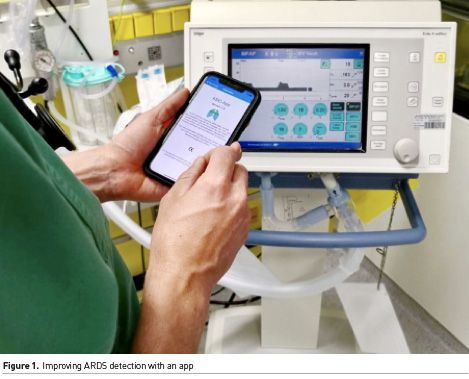 Moreover, app use can be a relevant interlink to bundle data from the EHR and to transfer them for the purpose of AI research. Ideally, an intersectoral infrastructure will lead to interoperability for comparing big data on a higher level and for building data bases in analogy to MIMIC-III.

Wellbeing in the ICU

H ealthcare workers across the world have been facing significant challenges due to the COVID-19 pandemic. In particular,... Read more

If It’s Good for Calcium Why Not Magnesium? Reasons to Measure iMg in the ICU

An overview of the importance of getting magnesium levels right in critically ill patients and the role ionised magnesium... Read more

During the first year, the ICU director should take a snapshot of the ICU situation and invest time and resources to acquire... Read more

Prioritisation: A Physicians’ Problem? An Opinion

In light of harsh criticism regarding physicians’ prioritising scarce resources during the COVID-19 pandemic, the question... Read more

Report of a Symposium Presented at LIVES 2020  33rd Congress of the European Society of Intensive Care Medicine  Moderator ... Read more

How the Pandemic Changed Telemedicine

An overview of the large-scale transition to telemedicine at Mayo Clinic during the COVID-19 pandemic and how it happened in... Read more