The secrets of the abdomen

Overview of abdominal point-of-care ultrasound use in the ICU, potential diagnoses and findings common to the critical care patient population.

The use of point-of-care ultrasound (POCUS) in critical care as a diagnostic and monitoring tool is rapidly expanding. While its role in cardiovascular and respiratory assessment is well established (within critical care), abdominal ultrasonography is less so; perhaps because of the myriad of potential diagnoses that can be made and the fact that the abdomen is often less accessible due to gaseous interposition. Regardless of modality, the key difference between radiology department scans and scans performed by intensivists is that the latter are more focused and aim to answer a specific clinical question in the context of a specific clinical situation.

It is without the scope of this article to describe every single (potential) use of abdominal POCUS; the aim is to provide an overview of the potential diagnosis and findings common to the critical care patient population.

One of the earliest uses of ultrasound (US) outside of radiology was in the detection of intra-abdominal free fluid (or blood) in the context of trauma. The Focused Assessment with Sonography in Trauma (FAST) scan has been consistently included as part of the Advanced Trauma Life Support (ATLS) course over the latest editions (Royal College of Surgeons 2017). The original FAST scan included assessment of the hepato-renal recess (right upper quadrant a.k.a Morison’s pouch), the spleno-renal recess (left upper quadrant) and the pelvis for the presence of free fluid/blood (Carroll et al. n.d.).This has been expanded to include the subcostal views (pericardial fluid/tamponade), anterior thoracic views (to rule out pneumothorax) and the detection of pleural fluid in the so-called extended FAST or eFAST (123sonography.com n.d.) (Figure 1). 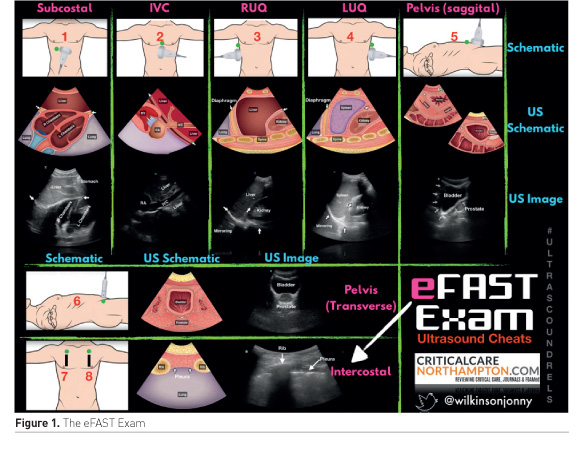 The sensitivity and specificity of FAST for the detection of free intraperitoneal fluid were 64–98% and 86–100%, respectively (Bloom and Gibbons 2018). This range may be explained by differences in the levels of clinical experience and in the reference standards.

The differential diagnosis of the presence of abdominal free fluid is summarised in Table 1. In the critically ill the main cause for abdominal fluid is in the setting of sepsis, capillary leak and massive fluid resuscitation, as seen in severely burned patients. The aetiology of spontaneous haemoperitoneum can vary, and the causes may be classified as gynaecologic, hepatic, splenic, vascular, or coagulopathic conditions. 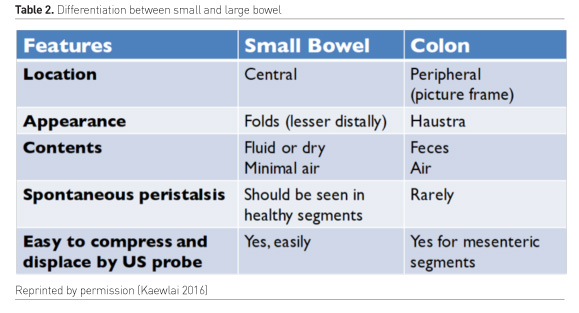 US is not sensitive at identifying a focus of extravasation from a vessel or organ (Schmidt et al. 205). Therefore, FAST may be an option for the initial evaluation of a patient to detect haemoperitoneum in non-trauma patients, but it does not replace computed tomography (CT) scanning.

Epidural anaesthesia, on the contrary, improves gastric emptying and peristalsis. The measure of the antral cross-sectional area (CSA) by US is feasible in most critically ill patients and would allow for direct visualisation of stomach content. On average, a CSA > 15-25 cm2 corresponds to a gastric residual volume (GRV) > 300 mL. The same principle has been studied with regard to assessment of preoperative fasting status amongst surgical patients (Van der Putte and Perlas 2014; Perlas et al. 2009).

Gastric US can also identify other pathologies such as gastric tumours (carcinomas and rarely teratomas), hypertrophic pyloric stenosis and even bezoar related to enteral nutrition. 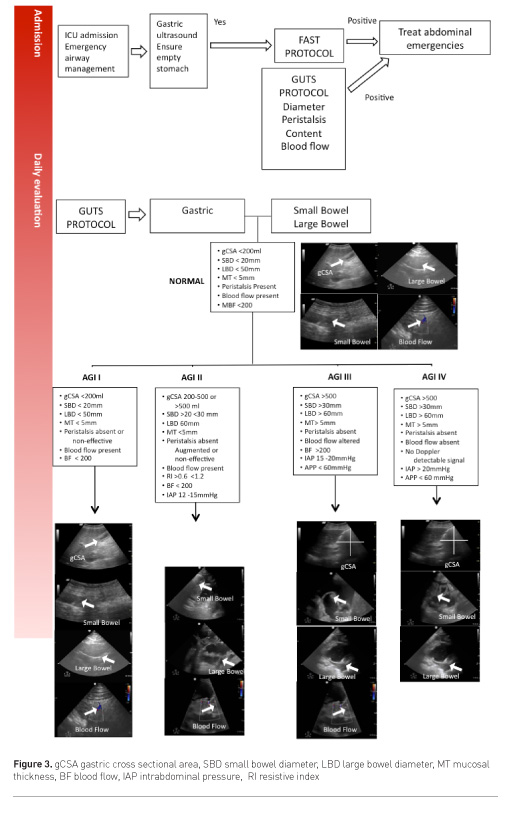 Features of the bowel which can be assessed using US include:

The diameter of the bowel and its contents may vary according to site, fasting/feeding state and bowel function. In adults, the normal small bowel measures <30mm in diameter and the normal large bowel <60 mm in diameter (Reintam Blaser et al. 2012). Dilated loops may show thickened walls (normally up to 3 mm in the small bowel), or thickened vavulae conniventes (normally up to 2mm in the large bowel). The exceptions to this are the duodenal bulb and rectum, which are less than 3 and 4mm in thickness respectively (Lichtenstein et al. 2014).Ultrasound patterns can aid in the differentiation of small from large bowel (Table 2).

Assessment of bowel peristalsis is difficult and subjective, but may provide useful information in several intestinal diseases. Increased small bowel peristalsis has been described in coeliac disease and acute mechanical bowel obstruction (increased to-and-fro motion of the bowel contents) (Hefny et al. 2012). In later phases, one may detect a fluid-filled lumen, thinning and spasm of the bowel wall, evidence of extraluminal fluid and decreased or absent peristalsis.

Physiologic air can be seen in the lumen of the bowel as small stars. Larger air bubbles can appear as hyperechoic stripes generating comet tail artefacts (these are rare in the small bowel but frequent in the large bowel), much like a linear view of the lung would look. Air artefacts can emanate from the thoracic cavity and the lung over the liver. Pathological air, however, may produce an enhanced peritoneal stripe sign (EPSS), reverberation artefacts and ring-down artefacts (Figures 2a and 2b) (Hoffmann et al. 2012).

International guidelines recommend that all patients who present in acute renal failure undergo an ultrasound examination to ascertain its cause (Kidney Disease: Improving Global Outcomes 2012). Hydronephrosis due to obstructive uropathy is a reasonably straightforward diagnosis to make.

More advanced techniques include the assessment of blood flow within the renal artery and vein using Doppler analysis.

Analysis of the urinary bladder should be performed as well. The bladder can be empty, filled or distended (globus). The position of the bladder catheter balloon can be checked, as well as the presence of hyperechogenic structures (debris, tumour, blood clot etc).

Ultrasound of the liver is divided into general US views including anatomic views of the liver, gallbladder and biliary tree. Pathology within these organs e.g. acute liver failure, can result in intensive care admission, but is beyond the scope of this paper.

Doppler US is used to assess the signal from visceral vessels that supply the gastrointestinal (GI) tract and smaller vessels within the intestinal wall. Although the technique cannot be used to assess capillary flow, it can be used to analyse all the major visceral vessels e.g. renal, hepatic, mesenteric. It has to be noted that normal bowel wall perfusion cannot be demonstrated by colour or power Doppler. The presence of flow in the bowel wall points towards pathologic perfusion (e.g. hyperaemia in actively inflamed segments, as seen in appendicitis).

Commonly used measurements which can be performed include:

Colour Doppler allows for the assessment of mural flow, the absence of which is a sign of ischaemia. Unfortunately, this finding is only reported in 20–50% of patients with a proven diagnosis of ischaemic colitis (Danse et al. 2000a; Danse et al. 2000b). Doppler US can show stenosis, emboli, and thrombosis in the near visible parts of the coeliac trunk, the superior mesenteric artery (SMA) and the inferior mesenteric artery (IMA). In the early phase of bowel ischaemia, US examinations may show SMA occlusion, hyperaemic segments and bowel spasm. Collateral vessels cannot be reliably displayed using ultrasound. Systolic velocities of more than 250–300 cm/s are sensitive indicators of severe mesenteric arterial stenosis (Hamada et al. 2014; Koenig et al. 2011). The spectral analysis of Doppler signals of arteries supplying the GI tract (truncus coeliacus, superior and inferior mesenteric arteries) and the vessels draining the intestine, can be used to estimate bowel perfusion (see below). Assessment in transverse and longitudinal plane should be performed. Low flow states can also be identified by the presence of spontaneous contrast and turbulent flow in the large vessels.

Portal vein: the normal main portal vein (MPV) is gently undulating with peak systolic velocities ranging between 20 cm/s and 40 cm/s. A low flow velocity of <16 cm/s in addition to a calibre increase in the MPV are diagnostic features of portal hypertension (PH). Further worsening of PH leads to a to-and-fro flow pattern, whereby the nearly stagnant blood column in the portal veins is seen to shift into and out of the liver with the respiratory cycle. In the end stages, stagnation of the blood column can lead to thrombosis or progress to a frank flow reversal or non-forward portal flow (NFPF). This is considered to have grave prognostic significance, indicating severe and irreversible liver failure (Wachsberg et al. 2002).

Doppler US can be used to assess renal perfusion. Normal resistive index (RI) is approximately 0.58 ± 0.10 and values >0.70 are considered to be abnormal. A renal Doppler RI may also help in detecting early renal dysfunction or predicting short-term reversibility of acute kidney injury (AKI) in critically ill patients. A recent meta-analysis suggested that RI may be a predictor of persistent AKI in critically ill patients with a pooled sensitivity and specificity of 0.83 (95% CI, 0.77-0.88) and 0.84 (95% CI, 0.79-0.88) (Ninet et al. 2015).

Increased renal resistive index (RRI) has been proven to be an independent predictor of worse cardiovascular and renal outcomes, especially when combined with reduced glomerular filtration rate (GFR), thus providing a useful diagnostic complement to the assessment of renal function in these patients. High RRI has also been correlated with the presence of hypertensive and atherosclerotic organ damage. Values >0.80 have been reported to be predictive of all-cause mortality in chronic kidney disease patients and may indicate impending renal transplant failure in this patient subset (Barozzi et al. 2007; Guinot et al. 2013; Ninet et al. 2015; Schnell et al. 2012).

Gastrointestinal function can be assessed with US, using a combination of anatomical, functional and blood flow evaluation (Schmidt et al. 2005). 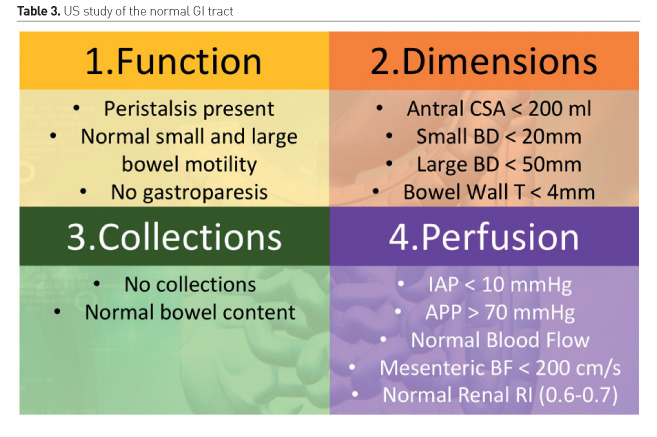 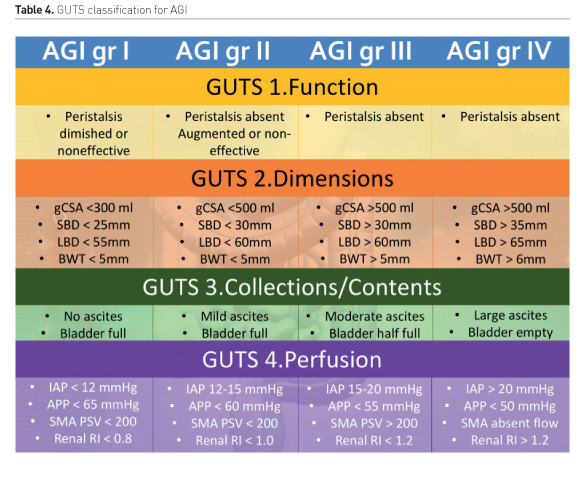 This approach is summarised by the GUTS (Gastrointestinal and Urinary Tract Sonography) protocol (Figure 3). The structured and stepwise approach may lead to improved practical management of adult ICU patients with acute gastrointestinal injury (AGI), as graded by the European Consensus Definitions (Reintam Blaser et al. 2012). Such a management strategy has not been shown to improve patient outcome, however.

Contrast-enhanced ultrasound (CEUS) involves the use of contrast agents containing gas-filled microbubbles administered intravenously, producing an image with greater contrast and/or highlighting more vascular areas. Although reasonably well established in radiology, and more recently cardiology departments, its use in intensive care is in its infancy. Unlike CT contrast agents, CEUS appears safe for patients with renal dysfunction and the modality itself remains free of radiation exposure to patients. Possible use within critical care includes enhanced echocardiography and in blunt abdominal trauma to assess solid-organ injuries (Dietrich 2017).

Doppler analysis as a marker of fluid status and venous congestion

As mentioned, Doppler analysis of the vasculature of specific abdominal organs allows for assessment of its perfusion. Some early work showed that this modality could also be used as a marker of systemic vascular congestion (Lewis et al. 1989).

This paper summarises the multiple uses of abdominal US on the ICU and highlights future work and development. It must be remembered however that despite the myriad of potential diagnosis, utilisation and interpretation of such techniques requires training and experience.

Acknowledgements and conflicts of interest

Adrian Wong is a member of the executive committee of the IFA.

An overview of the potential of POCUS on clinical decision making at the bedside and the need to add  it as a new diagnostic... Read more

(2019-01-29 08:30)
Prescription Pad is a clinic management software provides all types of facilities for hospitals & doctors.