Juergen Gebel, Sapuna Kuriakose, Barbara Griiter, Martin Exner; University of Bonn Hospital, Institute for
Hygiene and Public Health, Germany
BACKGROUND
Nosocomial infections pose a major problem in the healthcare system because they contribute to increased morbidity and mortality of hospitalised patients.The most frequently involved bacterial pathogens are Staphylococcus aureus, Pseudomonas aeruginosa, and coagulase-negative staphylococci such as Staphylococcus epidermidis[1].  In addition to bacteria, viruses, parasites, and fungi are also isolated from patients suffering from nosocomial infections.
In the hospital setting, patients can catch infections in three ways:
• From the patient's own permanent or transient skin micro-flora.
• Exogenous cross-infection due to transfer of microorganisms between patients  through direct contact, aerosols, and objects contaminated by the patient's own flora or those of the medical staff[2].
• Endemic or epidemic exogenous infection caused by the flora found in the healthcare setting[2].
This latter type is caused by microorganisms which are well-adapted  to the hospital environment[2].
Hospital-acquired infections are often associated with the use of medical devices. Open infusion systems and open drug transfer devices increase the risk of microbial entry leading to infection. To minimise  such infections, the National Institute for Occupational Safety and Health (NIOSH) recommends the use of a closed-system transfer device defined as follows[3].
"A drug transfer device that mechanically prohibits the transfer of environmental contaminants into the system and the escape of hazardous drug or vapour concentrations outside the system".
PURPOSE
The aim of this study was to evaluate the microbial tightness of Cyto-Set® and Cyto-Set® Mix against airborne contamination.
Cyto-Set® is a closed infusion system used for safe preparation and application of cytostatic drugs.
METHODS
The airborne contamination analysis was carried out using Bacillus subtilis spores. The preparation and purification were performed according to the laboratory standard method described by Gebel in 1998[4].
Ecoflac® Plus IV solution containers with 1OOml and SOOml of 0.9% sodium chloride solution were hung up in the exposure chamber and spiked with either the Cyto-Set® Mix (100ml container) or with the main line Cyto-Set® (500ml container). The end of the main line was drained out of the chamber into a sterile Erlenmeyer flask, with all existing air vent filters and clamps closed. A nebuliser containing a suspension of Bacillus subtilis spores (Average concentration: 5.6 x 10 cfu/m3) was used to generate an aerosol for one minute (Figure 1).
Figure 1: Experimental setup 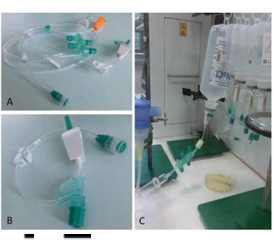 (A) Cyto-Set®; (B)Cyto-Set® Mix; (C) Experimental setup
Two minutes after nebulisation, the first Cyto-Set® Mix was connected with the main line Cyto-Set®. Then the clamp of this Cyto-Set® Mix was opened, and the infusate was collected, at a drip rate of 180 drops/min, into a sterile Erlenmeyer flask. In the following step, the clamp of the main line was then opened to rinse the system with 50ml 0.9% sodium chloride solution. The remaining three containers of Cyto-Set® Mix were emptied in the same way. Finally, the Erlenmeyer flask with the collected infusate of 600ml NaCl was then emptied, filtered, and examined for microbial contamination, as explained above.
One Cyto-Set® in combination with four containers of Cyto-Set® Mix was tested per experiment.
RESULTS
No transmission of Bacillus subtilis spores through Cyto-Set® and Cyto-Set® Mix after contamination of the chamber (with 1.17 x 10(5) cfo of Bacillus subtilis spores which corresponds to 5.6 x 10(3) cfu/m3 on average) was detected (Table 1).
Table 1: Evaluation of the microbial barrier of Cyto-Set®
CONCLUSION
Currently, very few studies are available concerning the microbial barrier function of closed system transfer devices. Cyto-Set® and Cyto-Set® Mix are closed systems according to the NIOSH definitions. The acquired data show that the test method used is suitable for investigating the microbial tightness of infusion devices such as the Safeflow valve.
In general, the bioburden in the ambient air of operating theatres and intensive care units ranges from 10(1) cfu/m3 to 10(2) cfu/m3 of air[5-7].
This study was carried out using concentrations of Bacillus subtilis spores 100 times higher than those found in ambient air.
The evaluation of Cyto-Set® and Cyto-Set® Mix demonstrated highly effective microbial tightness when applied according to instructions, even when exposed to excessive air contamination.
REFERENCES
[1] Vincent JL et.al. The prevalence of nosocomial infection in Intensive Care Units Europe: The results of the EPIC study. JAMA 1995;274:639-44
[2] World Health Organisation. Prevention of hospital-acquired infections. WHO/CDS/CSR/EPH/2002.12; 2002.
[3] NIOSH Alert: DHHS (NIOSH) Pub No. 2004-165; September 2004
[4] Gebel J. Standardisierung der mikrobiologischen Dosimetrie im Rahmen der Desinfektion von Trinkwasser mit UV-Strahlen. Mathematisch-Naturwissenchaftliche Fakultät. Bonn, Rheinische Friedrich-Wilhelm-Universitat: 161;1998
[5] Qudiesat K. Assessment of airborne pathogens in healthcare settings. AJMR 2009;3(2):66-76
[6] Li CS, Hou PA. Bioaerosol characteristics in hospital clean rooms. Scientific Total Environ 2003;305(1-3):169-76
[7] Augustowska M, Dutkiewicz J. Variability of airborne microflora in a hospital ward within a period of one year. Ann Agric Environ Med 2006;13(1):99-106
Click here to find out more about BBraun