Share
Download PDF
In vitro study validating the microbial barrier function of closed infusion systems against microbial touch- and airborne contamination
Dr. Jörg Brünke, QualityLabs BT GmbH, 90411 Nuremberg, Germany
BACKGROUND
Healthcare-acquired infections (HAIs) are a major problem for healthcare systems as they contribute to increased morbidity and mortality in hospitalised patients. Each year, HAIs affect millions of patients worldwide[1, 2].
Infusion systems are widely used in daily clinical practice. Their major goals are the protection of healthcare workers against exposure to infectious agents and potentially harmful drugs, as well as the protection of patients from microbial contamination.
Infusion systems are typically expected to be closed systems. The definition of a closed system should take into account the following aspects:
• microbial aspect (preventing unfiltered air or microbial contaminant transfer into the system)
• chemical aspect (preventing the escape of a drug out of the system)
• blood aspect (preventing the escape of blood out of the system)
With respect to infection by transmission, the most clinically relevant pathways are direct contact and airborne transmission. Therefore, the microbial barrier function of infusion systems is an important aspect to consider in terms of preventing microbial ingress and nosocomial infections.
PURPOSE
The aim of this study was to investigate a complete infusion device as a closed system to confirm the microbial barrier effectiveness of the connections found on a typical infusion system (B. Braun’s infusion system including Caresite® extension set) that are subject to microbial exposure (touch and airborne contamination).
METHODS
For testing, a completely assembled infusion system with a Caresite® extension set was used (Figure 1).
Figure 1: Assembled infusion setup including a Caresite® extension set 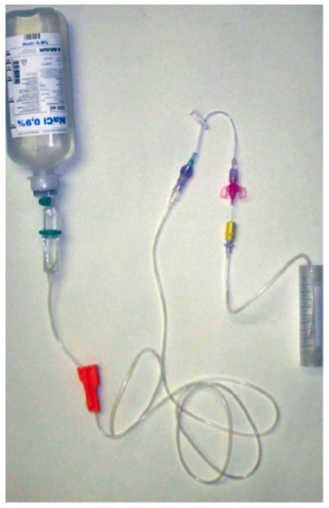 CONCLUSION
The presented data demonstrates that the applied test methods are suitable for investigating the microbial barrier effectiveness of infusion system components such as the Caresite® extension set as well as of the complete infusion systems. The presence of microbes on the Caresite® extension set connection sites after the artificial contamination does not necessarily result in their transmission into the extension set or infusion system, but the data proves that handling the extension set/system without disinfecting the connection sites can result in transmission of microorganisms into the extension set/system. Once transmission has occurred, the microorganisms may enter the patient’s body and can be the initial stage of an infection.
The applied methods demonstrate that the infusion system components tested – such as the Caresite® extension set - act as an antimicrobial barrier when used and disinfected according to instructions and guidelines.
REFERENCES
[1] Allegranzi B, Bagheri Nejad S, Combescure C et al. Burden of endemic health-care-associated infection in
developing countries: systematic review and meta-analysis. Lancet 2011;377:228–41
[2] Bagheri Nejad S, Allegranzi B, Syed SB, Ellis B, Pittet D. Health-care-associated infection in Africa: a
systematic review. Bull World Health Organ 2011;89:757–65
Click here to find out more about BBraun