Clinical ultrasound in the age of artificial intelligence

The foremost expert in critical care ultrasound on the value of natural vs artificial intelligence in medicine.

Ultrasound is a tool like no other in medicine. Most importantly, because it is a work of the hand and the eye, combining the art of reasoning, common sense (that is, intelligence), it provides a unique opportunity for the physician to be in direct contact with the patient. And now, we hear about AI in this field, such as automatic recognition of B-lines (among others). We shortly evoke some basis of lung ultrasound. Lung sliding is a parameter of prime importance (for diagnosing pneumothorax and inflammatory lung diseases), accessible to none of the modern technologies (Figure 1). The B-line is a comet-tail artifact, strictly defined according to seven criteria (Lichtenstein 2014). A certain concentration of B-lines, called lung rockets, defines interstitial syndrome (Figure 2). This sign has a critical relevance for promptly diagnosing numerous conditions: the diagnosis of pneumothorax; the diagnosis of pulmonary oedema (the analysis of lung sliding allowing to distinguish haemodynamic from inflammatory oedema, schematically). The indication for giving and discontinuing fluids in critically ill patients with circulatory failure (the FALLS-protocol), and many others. The search for pneumothorax is the first step of the SESAME-protocol, a focused critical whole body ultrasound approach used during a cardiac arrest. Our unit is always ready for it, so no time is lost (Lichtenstein and Malbrain 2015). When each second counts, we are not sure that AI will be accessible for showing the right way. For managing cardiac arrest, even if the SESAME-protocol can be done in a few seconds, years of exciting understanding are necessary, and this is precisely what keeps us so much attracted. 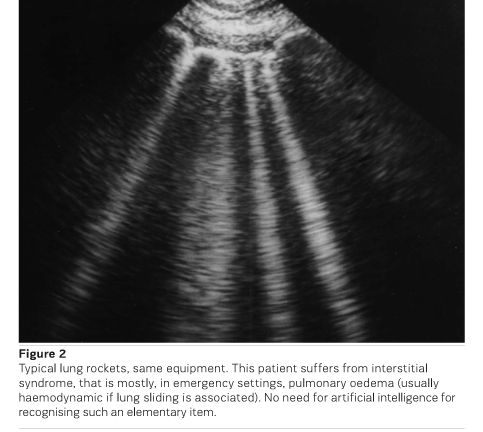 I want to remind that the (natural) intelligence is not a trait of exceptional people. Any human being is, by definition, intelligent. Many people think they are deprived of this gift, they just forget that the success is done by one third of it, but also one third of work, and... one third of luck. We can favour luck, we can work, even a lot. Intelligence is the only parameter where a direct action is useless. Suppressing the interest of intelligence would tempt people, we imagine, yet if (natural) intelligence is no longer necessary, we also imagine that, in a first step, then people will be happy (because of feeling favoured), and a minority will have to find a profession which does not require intelligence (if they succeed to find a job). Time passing, we don’t have the slightest idea of what such a “civilisation” would become. A life without the feeling to be useful, where AI will choose your partner (with perfect technical accuracy of course) scares us to a point that we begin to love the defaults of our life partner!
To conclude, even if ultrasound was long considered a technique in traditional imaging, in our field at least, critical ultrasound appears as a major help to the physician who has taken the best of physical examination for understanding the data appearing on the screen, helping to perform a visual medicine. All this occurs in a normal setting where the doctor remains a doctor (and the patient, a patient). That is, a deal between human beings first. That is a deal where natural intelligence and emotion work in symbiosis, that is, a genuine philosophy. Even in the age of AI, this strength will remain a priceless help. I foresee a bright future for ultrasound, this “sleeping giant” as many say recently, a genuine stethoscope according to our knowledge (Scopein, to see, and Stethos.... the chest wall).

An overview of the application of personalised medicine in cardiology and the potential benefits it offers for improved cardiovascular... Read more

Analytics in the real world: How one radiology practice is helping patients get an MR exam, faster

Unleashing the full potential of AI

The digital revolution has changed every aspect of our lives – from the way we communicate to the way we live and interact. We... Read more

Providing excellent care inside and outside of the traditional hospital... Read more

An accomplished health care executive with more than 35 years of financial... Read more