Share
Download Article Back
Re-examining approaches for dementia management. The potential of applying integrated pharmacological and non-pharmacological treatments for the care of people living with dementia.
Dementia is a mental state used to denote severe cognitive impairment which impacts daily activities and life. Alzheimer’s disease is one of the most common forms of dementia, vascular dementia being the other. Contrary to common belief, the mental decline seen in Alzheimer’s disease and other dementias is beyond memory failure but encompasses a range of cognitive functions including awareness, reasoning, perception, creativity, language and communication. Some diseases and conditions which can be of infectious, metabolic or neurological origin, or traumatic brain injury, can also lead to dementia.
You might also like: Fighting the Rising Tide of Dementia
Dementia is becoming a global emergency of epidemic proportions affecting millions of people worldwide. In 2016, 47 million people lived with dementia. By 2050 there will be over 131 million, worldwide, with projections of a 116% increase in dementia prevalence in developed countries, and double by comparison to 227% for transitional countries and 264% for developing countries (Alzheimer’s Disease International 2015; 2016; The Lancet 2015). In research studies there is a tendency to focus on Alzheimer’s disease data, which is expected as it’s the most common form of dementia. As a consequence, data on other forms of dementia are not usually addressed or measured.
Among the ageing population, dementia is the leading chronic disorder and contributor to disability and need for care. An expanding ageing population means that even if the prevalence of dementia remains constant, the number of people with dementia will continue to grow. Any treatment approach that delays the onset and improves the symptoms of dementia will have significant societal and economic benefits.
Health systems worldwide struggle to provide adequate coverage of diagnostic and treatment services for patients with dementia. Care is often fragmented, uncoordinated, and unresponsive to the needs of these people.The demographics of the escalating problem has led researchers to estimate care costs over the coming decades. In EU countries that had 7.22 million people living with dementia in 2008, estimated to increase to 14.3 million by 2050, costs are projected to increase to €250 billion by 2030 for the whole of Europe (Wimo et al. 2009). In the USA, dementia is one of the most challenging and costly to treat diseases with $277 billion projected to be spent on dementia care by the end of 2018 (Alzheimer’s Association 2018). In the UK, the total cost of dementia to society was £26.3 billion (2017) projected to reach £55 billion by 2040 (Prince et al. 2014).
In most countries around the world, the management and economic support for dementia care is mainly provided by the extended kin. Given the many years of dementia progression, informal costs of care can cause distress to families and lead them into financial hardship. UK estimates show that out of the total £26.3 billion spent for dementia care in 2017, £11.6 billion were contributed by the work of unpaid carers and family members, while only £4.3 billion were spent by healthcare sector and £10.3 billion by social care (publicly and privately funded) sector. In the USA 16 million people provided unpaid care in the form of physical, emotional and financial support – a contribution to the nation valued at $232 billion (2017) (Alzheimer’s Association 2018). Figure 1 shows the costs for dementia care globally. 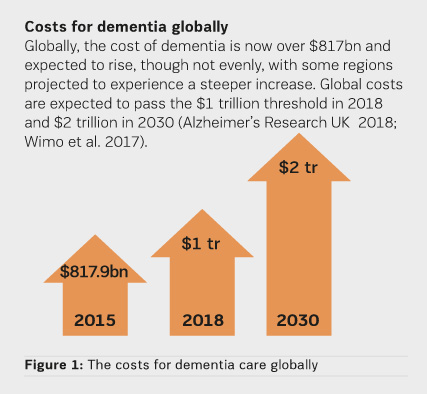 These sobering estimates should drive intensified national and global action to help improve medical and public health interventions for dementia, as well as social and wider public policies. National authorities and societies not adequately preparing to address dementia will be severely disadvantaged both in societal and financial burden.

Why is dementia rising?

Dementia has no cure. A potentially preventable condition continues to affect millions of people. Major reasons that contribute to the rising numbers of people living with dementia are included in Table 1. 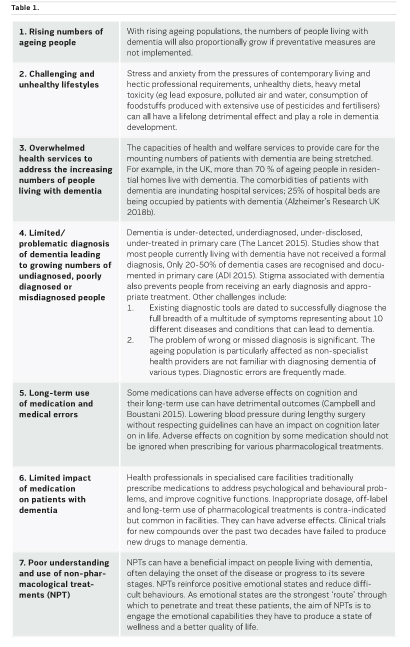 Despite a plethora of medical and neuroscientific research, there remains much uncertainty as to the effectiveness of existing pharmacological treatments for dementia, which have limited efficacy and adverse effects. For example, antipsychotic drugs, one of the main treatments for managing behavioural and psychological symptoms in patients with dementia, are associated with an increased risk of falls, stroke, heart problems or even death. Inappropriate high dosage and long-term use of antipsychotic medication is contra-indicated but common in specialised care facilities, in some countries (Gustafsson et al. 2013). Antidepressants, another type of medication given in dementia, have an unsatisfactory performance. Medication prescribing and administration to these patients is complex and can result in unsafe use of medications and medication errors.
Although extensive and expensive efforts to develop new medication for Alzheimer’s and other dementias have continued in the past decades, disappointing results from drug trials with candidate compounds have led to doubt that pharmacological treatments have a positive influence. For example, one study showed that between 2000 and 2012, 244 compounds were tested for Alzheimer’s disease in 413 clinical trials with a failure rate of 99.6% (Shurkin 2015).
The limited efficiency of existing medications and associated adverse effects, as well as unsatisfactory outcomes from new drug trials, have led to scientific and clinical interest in non-pharmacological treatments. These are increasingly being recognised as important complementary approaches for the care of patients with dementia. To promote a balanced use of antipsychotics and anxiolytics, health professionals must become more aware and build skills on the application of non-pharmacological treatment approaches.
The suggested preference by some clinicians now working in these areas is to initiate non-pharmacological approaches first and avoid or delay use of medication which has the potential of adverse effects and is expensive (Shurkin 2015). With symptom progression, the benefits of integrating non-pharmacological approaches with a balanced use of appropriate medication become apparent.

Why are non-pharmacological treatments important in dementia care?

What people living with dementia continue to have as their condition progresses is the ability to experience emotions. While they may not properly interpret a situation or circumstance which triggers their emotions, they are able to experience them fully. Environments, people and circumstances which have a calming and reassuring influence on patients with dementia bring up positive emotional and psychological states in them. Non-pharmacological treatments appear to reinforce positive emotional states and reduce difficult and negative ones. As emotional states are the strongest ‘route’ through which to penetrate and positively influence these patients, the aim of non-pharmacological treatments is to employ the emotional capabilities and functioning these patients have, to produce a better quality of life for them.
It is perceivable that emotional and psychological wellness may also positively contribute to stimulating residual cognitive abilities. The positive emotional states that these treatments provide can be a strong foundation for supporting and triggering non-specific stimulation of cognitive reserves, leading to retention of new information with time and practice. Indirect evidence arises from studies using cognitive training or cognitive rehabilitation, which have demonstrated improved rates of learning and memory among patients with mild dementia (Shurkin 2015).

What are non-pharmacological treatments?

Non-pharmacological treatments are an array of interventions developed over the past two decades, ranging from cognitive training and biographical approaches to sensorial stimulation and environmental enhancement. Studies show that multicomponent interventions (eg with cognitive, motor, sensory and daily living activities stimulation components) for patients with dementia can have a significant positive effect on their behavioural and psychological problems, as well as cognition (Graessel et al. 2011).
Recently, virtual reality (VR) applications such as headsets or projections showing travel, landscapes, animal and aquatic life, adventures, footage of important past events, and the Google Earth Virtual Reality program as a visual reminder of familiar places, have been used to help improve the emotional states (eg anxiety, depression, boredom) of people living with dementia (Tsukayama 2016; Chadwick 2016; Kennedy 2017; Lucci 2017). VR applications have been used in some specialised care facilities in Australia, USA, and the UK, among some countries, with positive impact on both the people living with dementia and healthcare professionals and caregivers. Table 2 lists non-pharmacological treatments. (Information from: UK’s Policy Research Unit in Policy Innovation Research 2012 systematic review report and USA’s Agency for Healthcare Research and Quality (AHRQ) listing of non- pharmacological interventions and authors’ experience). 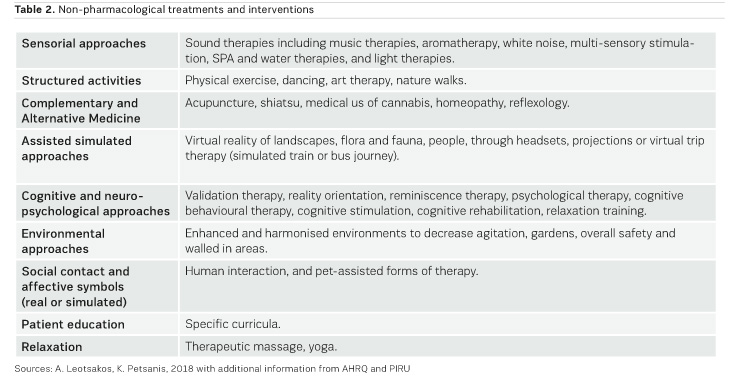 In addition, comprehensive training of health professionals and family caregivers includes building of skills to care for patients with dementia. This comprises of support groups, training and eduction of health professionals, as well as caregivers to care for specific behaviours.
Patient-centred care should be a commitment and a guiding principle to supporting people living with dementia in communities and specialised health facilities. This includes the application of principles and best practices of patient safety, quality improvement of services provided, engagement of family members in the careplan and, above all, a focus on the psychographic profile of people living with dementia through interpersonal relationships with health providers.

A model for the management of dementia

A balanced management of dementia includes options for combination of pharmacological and non-pharmacological treatments. These are tailored to the profiles as well as the clinical and care needs of patients, aiming to optimally and sustainably improve their mental status, and overall health and wellbeing, without excessive or long term use of medication. Figure 2 represents the aim of being able to deliver high quality and safe care targeted to the needs of each patient. 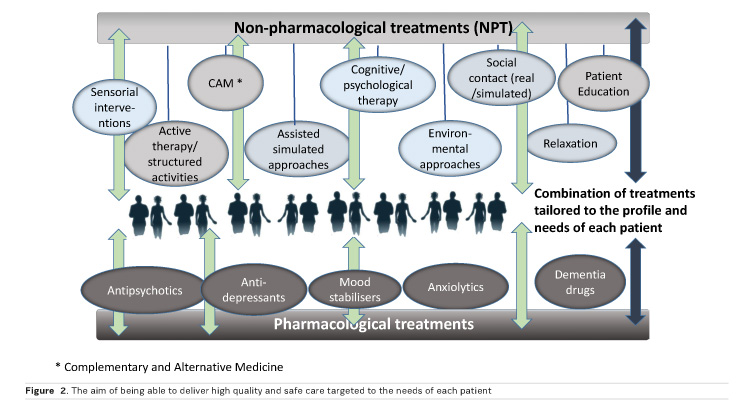 As there is no cure for dementia, people living with this condition experience deteriorating behavioural and psychological symptoms, which cause considerable patient distress and are associated with accelerated functional and cognitive decline. They can also cause distress to family caregivers and healthcare professionals in specialised care facilities. The main goal of dementia care is for an early diagnosis, and delay of the onset of dementia to ensure quality of life. The management of dementia should address behavioural and psychological symptoms, maintain quality of life, maximise function in daily activities, improve recognition skills, mood, foster a safe living environment, and promote social engagement.
The aim of integrating pharmacological and non-pharmacological treatments is to improve emotional and behavioural states with an anticipated longer-term goal of protecting cognitive reserve or even building areas of residual cognitive ability. Non-pharmacological interventions are important as they allow people living with dementia to enhance their sense of wellbeing and improve on the burden of family members, caregivers and health professionals caring for these patients.
If non-pharmacological treatments could be routinely applied, then patients with dementia would continue to experience day- and night-long positive emotional and psychological states together with a balanced use of medications for dementia.
These emerging interventions of scientific and clinical interest are useful and versatile approaches for the management of dementia. Future research would benefit from examining their effectiveness, favourable patient outcomes, cost benefits and the training of healthcare professionals.

Lessons Learnt from COVID-19. A mental health perspective on the use of digital technologies

While capacity in the health system was increased to manage COVID-19 infections, the experience for mental health was very... Read more

Today’s patient is armed, informed and fully engaged in their care delivery. How does this abundance of knowledge... Read more

Healthcare is in constant change. Today the change is driven by the patients. Access to patient data has changed the way... Read more

If you can’t beat them…join them

A moving target: the future of cardiology

In this issue of HealthManagement, we shine the spotlight on two leading figures in the field of cardiology—Prof. Dr. Hüseyin... Read more