Another Big First For Hologic

Thousands of clinicians worldwide prefer prone patient positioning ‏instead of upright systems for breast biopsies as prone systems support ‏the patient stably throughout the procedure while isolating them from ‏the biopsy needle. This provides a better overall patient experience. ‏Alejandro Tejerina, M.D., a radiologist with the Centro de Patologia de ‏la Mama, Tejerina Foundation, in Madrid, Spain, one of the first adopters ‏of the new Affirm™ prone system, reports that the feedback from the ‏first wave of patients is very positive.

“We have been suffering to handle complex biopsies of subtle lesions ‏like faint calcifications or distortions that we were only able to see ‏on 3D images,” Dr. Tejerina says. “Older breast biopsy systems are ‏restricted to 2D imaging with a narrow window for targeting the lesions. ‏Often they required multiple x-ray exposures to find and position the ‏suspect tumor for the biopsy needle. With tomosynthesis imaging on ‏the new Affirm™ prone system, there is a much wider field of view, the ‏biopsy device can be positioned anywhere in a 360-degree circle, and ‏areas of suspicion seen only with 3D imaging can be easily biopsied.” ‏On the previous Hologic biopsy table the biopsy device had to be ‏positioned manually, "the new system does this for us automatically, ‏which saves time,” Dr. Tejerina says. “The software really streamlines ‏our workflow, so the procedure goes faster.” The new Affirm™ Prone ‏table uses translucent paddles and a wider detector. “This helps us ‏see lesions in the first scout and significantly reduce the number of ‏images needed to get to the lesion.”

The Centro de Patologia de la Mama, Tejerina Foundation has been ‏leading the way in women’s breast health for over 40 years. In 2000, ‏the Centre pioneered the use of digital mammography in Spain. The ‏Centre was first center in Spain to install a stereotactic guided prone ‏biopsy table in 1997. In 2010 the Centre installed a Hologic Selenia® ‏Dimensions® breast tomosynthesis system, the first site in Spain to use ‏the innovative technology. In 2010 the Centre was also the first site ‏in Spain to combine the Hologic Affirm™ upright biopsy system with ‏the Hologic tomosynthesis system. In 2015 the Centre began offering ‏Hologic’s I-View™ contrast enhanced 2D imaging along with a 3D scan, ‏further increasing the value of a contrast mammography procedure. ‏ 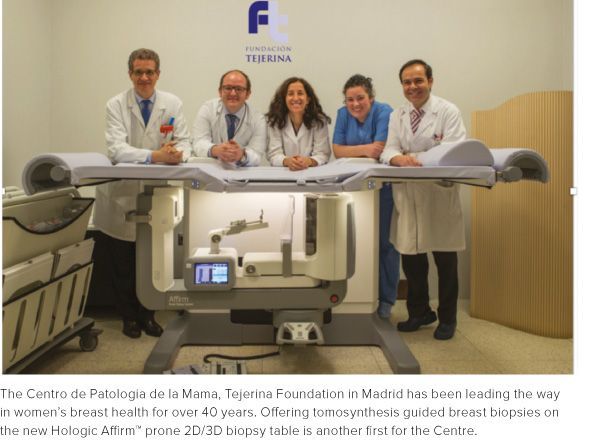 The value and importance of multidisciplinary teams in breast cancer was demonstrated at the European Society of Breast Imaging (EUSOBI)... Read more

A transformation in mammography