Advantages of 3D Printing in Healthcare

The Jacobs Institute (JI), a non-profit medical innovation ‏centre in Buffalo, New York, is using 3D printing to ‏further its mission of creating the next generation of ‏medical technology to treat vascular disease, such as heart ‏attack and stroke. One of the ways it achieves this is by partnering ‏with researchers at State University of New York at ‏Buffalo (UB) and surgeons at the Gates Vascular Institute ‏(GVI) to plan for complex vascular surgeries.

A few years back, UB biomedical engineers, in consultation ‏with neurosurgeon and JI chief medical officer Adnan ‏Siddiqui, PhD, MD, FACS, FAHA , developed a way to 3D-print ‏brain arteries to better understand brain aneurysms and ‏stroke. As technology and the team’s creativity evolved, so ‏did the realism, complexity, and specificity of the 3D-printed ‏models. It began in a university lab as an experiment, where ‏the biomedical engineers painted layers of silicone over a ‏Play-Doh model of a brain aneurysm. Once the Play-Doh ‏was dissolved away inside the silicone, it created a single, ‏hollowed-out blood vessel. This was a tedious process. It ‏was improved rapidly by a technology called additive manufacturing, ‏also known as 3D printing. The UB lab purchased ‏a Stratasys Eden 260V 3D printer, which took brain artery ‏modeling to the next level.

In the last two years, UB and JI engineers collaborated to ‏create 3D-printed models of arteries to be used in various ‏ways, including physician training, device testing, and surgical ‏planning. These arterial models, known as “vascular phantoms”, ‏can be used for:

Showcasing the collaborative accomplishments with the ‏university, the hospital, and building a relationship with Stratasys ‏allowed the JI to advance 3D printing further. It was designated ‏as a Stratasys “3D Printing Center of Excellence in ‏Healthcare” in April 2016. The JI acquired a new 3D printer ‏because of the Stratasys partnership and a grant from the ‏James H. Cummings Foundation.

In order to create the patient-specific vascular phantom, there ‏are steps that the team of biomedical engineers must follow. ‏It is a process largely reliant on various computer programmes ‏to render a final file that can be loaded into the 3D printer.

Biomedical engineers take a patient’s MRI or CT scan and, ‏using specialised computer software (Toshiba Vital Images), ‏they identify the patient’s individual brain arteries in a process ‏called “segmentation”. Next, another computer programme ‏(Autodesk Meshmixer) is used to hollow-out the vessels and ‏add support and connectors, which attach the printed model ‏to a cardiac pump to simulate blood flow. Afterward, the ‏fully-refined and translated computer model is loaded into a ‏program called Objet Studio, which is what the Stratasys Objet ‏500 Connex 3 multi-material printer reads to create the 3D model. Once printed, the biomedical engineers then clean and ‏physically hollow out the model using a clean station, which ‏removes support material and transforms it into a useable ‏model. The model then accurately replicates the structure, ‏texture, and fragility of human vasculature. The physicians ‏have a model of human vasculature on which they can train ‏other surgeons, test endovascular device prototypes, or even ‏plan and practice for a complex surgery. 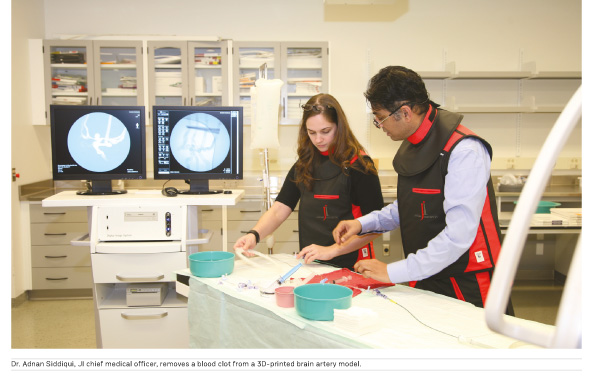 In the case of surgical planning, the surgeon assembles the ‏surgical team in the Jacobs Institute Training Centre to perform ‏the procedure on the model under fluoroscopy. The surgeon’s ‏team is joined by JI engineers, who can converse about the ‏model’s properties or structure. The JI also documents the ‏procedure, capturing surgeon feedback on the models and ‏the surgical approach. The JI take photographs and videos, ‏to further catalogue the experience. The surgeon and the ‏surgical team use the models to crystallise the plan in several ‏ways during a practice surgery.

First, the surgeon must determine the optimal path to deploy ‏the device. Using the model can help the surgeon recognise ‏if using a certain vessel pathway is helpful or problematic. It ‏can also assist the surgeon in recognising which vessels are ‏twisted, or tortuous, and exactly how to handle the catheters ‏and wires to navigate the bends and turns.

Then, once the surgeon reaches the affected area of the ‏blood vessel, they can try using a particular device to treat ‏it—whether it is a device that will retrieve a clot in the case ‏of a stroke, or a stent and coil duo to treat an aneurysm. After ‏deploying the device, a surgeon may find deployment is too ‏difficult or that a different device might be better suited for ‏treatment of that particular case. Finally, the surgeon would ‏use the original or try an alternate device during the actual ‏surgery, with greater confidence that the original device would ‏have been unsuccessful.

There are numerous advantages to patients, surgeons, and ‏hospitals in using a 3D-printed model to devise an optimal ‏surgical plan. It: ‏

The use of 3D printing in healthcare remains a novel practice ‏with room for increasingly sophisticated applications. ‏The Jacobs Institute judiciously applies this technology ‏to advance physician training, improve device testing, and ‏strengthen surgical planning. Surgical planning is still done on ‏a case-by-case basis for highly complex surgeries to reduce ‏complications and, hopefully, to improve patient outcomes. ‏Patients, physicians, and hospitals will reap the benefits, as ‏3D printing and the JI’s experience and processes evolve. ‏The future is bright for 3D printing and health care. Customising ‏surgical planning for complex cases bolsters hope for better ‏outcomes with patients suffering from vascular diseases. ‏The JI is uniquely positioned to push the envelope in developing ‏this technology. By leveraging its relationships with ‏surgeons, researchers, the medical device industry, and other ‏companies such as Stratasys, the JI can impact the future ‏of vascular medicine in Buffalo and beyond. 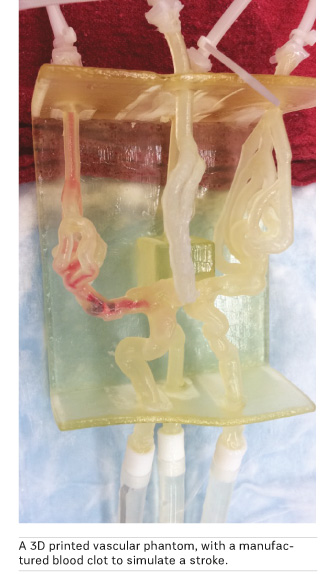 Michael is the director of operations and entrepreneurship for the Jacobs Institute, focusing on innovation, business development, and operations. Michael is a biomedical engineer with extensive strategic planning and operations management experience in the medical device space, having worked with several companies in the sector. He oversees the JI’s team of biomedical engineers, as they implement and improve 3D printing in healthcare. Michael interfaces with the medical device industry, the hospital, and the university to achieve the JI mission. He is currently preparing to launch the JI’s Idea to Reality Center, or i2R, which will be a proof of concept center for neuroendovascular devices.

Assistant, State University of New York at Buffalo Rick graduated from the University at Buffalo (UB) in May 2015 with a double degree, B.S. in biomedical engineering and B.A. in chemistry. Rick is currently pursuing his PhD in biomedical engineering, specialising in 3D printing in healthcare, under the advisement of Ciprian Ionita, PhD. In this capacity, he works collaboratively with the JI. Previously, he was a JI intern. While in undergraduate school, he worked as a researcher in UB’s Lovell Nanomedicine Laboratory and under Renee Reynolds, MD, in his senior year to understand paediatric neurological conditions. Rick served as first author on one journal article. He has also given presentations at five conferences, presented two webinars, and was a featured speaker at the Virtual 3D Printing in Medicine Summit.

Mammography is the Most Proven Screening Method

INTERVIEW WITH GÁBOR FORRAI, EUSOBI PRESIDENT What were some of the highlights of the European Society of Breast Imaging... Read more

3D printing will most likely transform the medical field as it presents a multitude of new opportunities from visualisation of... Read more